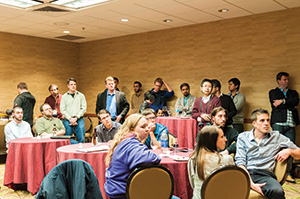 “[These are] networking meetings that would occur on a regular, monthly, basis,” said Crystal Bailey, the careers program manager at APS. “It would encompass students, postdocs, and early career physicists working in industry, national labs, and academia.”

One of the central recommendations of the early career task force, formed in response to the APS Strategic Plan, is to establish a number of local networks for physicists to meet informally. The hope is that the groups bring different physicists together across a region, which could encompass several universities or labs.

“It’s all about building partnerships,” Bailey said. “We want the industry people to be invested in coming because it will give them an opportunity to recruit for their companies and build partnerships with local institutions.”

Links are separate from established APS sections both in size and formality. Local Links will bring physicists together from a smaller area, while sections cover multiple states. In addition, section meetings are essentially small science conferences, whereas Local Links are designed to be more casual and up to the group itself as to how they’re organized.

“These will be totally informal, networking meetings,” Bailey said. “These are truly grassroots groups. APS does not dictate the structure or the activities of the group.”

In Denver about 60 people showed up at the Sheraton hotel to meet, share a drink, and network. Already there are other pilot Links gearing up in the Tampa Bay and San Francisco Bay areas.

“Those three places already have a fairly strong infrastructure of students who were willing to begin organizing events,” Bailey said. She added that students play a major role in putting these groups together, and it only takes one or two motivated people to get a group going.

Because the Links are new, APS is staying flexible about how they’re organized and what it can do to help. The Society is able to provide some funding, advertising, and network-building to get new Links off the ground, and is in the process of putting together a list of best practices based on the successes of these first meet-ups to help new groups get started.

Members interested in starting their own Local Link can contact Jon Burkin at burkin@aps.org or visit the APS Local Links web page.