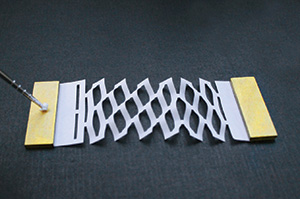 APS March Meeting, Denver — Melina Blees, a graduate student at Cornell University, is dabbling in kirigami, a form of origami that mostly involves cutting paper rather than folding it. Through specially placed cuts, a sheet of paper becomes a spring, a pyramid, a net, or any number of other shapes.

But Blees is working with 10 micron squares of graphene, which is a single layer of carbon atoms. At the APS March Meeting in Denver, Blees showed videos of the structures she has created. They flex, bend, twist and stretch almost exactly the way they would if they were cut from paper.

“I knew, just from the numbers, that graphene should behave like this,” said Blees. “But to actually feel like you are pulling it and playing with it, and it’s resilient — it’s kind of incredible.”

The use of origami in physics is not new — another meeting session focused on its many applications. And the idea that changing the physical structure of a material can also alter its properties is of course familiar in mechanical engineering and metamaterials. But applying these concepts to graphene has been nearly impossible: it tends to stick to substrates and to itself, and tears easily when pushed or pulled, almost like wet tissue paper.

A few years ago, Blees and other researchers in Paul McEuen’s lab at Cornell found they could apply gold tabs to make “handles” to grab the graphene. They first transfer graphene to an aluminum film on glass, then use a photolithography process to deposit the gold tabs, and at the same time make the kirigami cuts. The aluminum is then removed with a mild hydrochloric acid etch.

Blees remarks that she can pick up and manipulate these “cantilevers,” but only if they are suspended in water. She and her colleagues suspect that as the aluminum is removed, the water gets between the graphene and the glass substrate, preventing sticking. In most cases, graphene sticks to the resting surface so well that trying to pick it up with the gold tabs would only cause it to tear.

This allowed the researchers to measure the bending stiffness of the graphene directly. “It’s not an easy thing to measure because usually graphene is suspended and under tension, and then that changes what you’re measuring,” said Blees. “So it’s a different situation when you can pick it up and it’s fairly free.”

Blees can cut a spring pattern out of the graphene, allowing it to stretch to nearly twice its resting length. For this reason, graphene could find its way into touch-screen technology, which is one place that this kind of flexibility might be useful.

Biophysics applications are attractive. In a group of connected cells, like a network of neurons, the graphene could serve to probe the cells individually.

“These [graphene nets] are really soft so they’re bio-friendly. You could just drape a net over a cell, measure some electrical properties, and get real time read-outs of exactly what kind of neural firing is going on in a specific location within an entire network,” said Blees. “We’re just starting to think about going in that direction…trying to see what we can measure electrically with graphene in solution.”

McEuen, in an interview, added that the goal of the kirigami research is to assist in creating machines at the microscopic level.

“Feynman, 50 years ago said, ‘There’s plenty of room at the bottom.’ He said we should miniaturize electronics, which we’ve done; information, which we’ve done; and machines, which we haven’t done,” said McEuen. “To attack this problem of how to make nanoscale machines, we’re borrowing ideas from kirigami and origami. That’s the 10,000 foot view, and these are the very early steps in that process.”