Physical science research funding fared relatively well in the recently passed 2014 federal spending bill. Several science projects that had been facing cancelation or construction delays will be able to continue. However, the modest spending increases are uneven, and future budgets may not continue the trend. (see also Washington Dispatch).

“It’s kind of a mixed bag,” said Matt Hourihan, director of the R&D Budget and Policy Program at the American Association for the Advancement of Science (AAAS). “It looks pretty good for a few agencies but the news isn’t good across the board.”

President Obama signed the $1.1 trillion Consolidated Appropriations Act of 2014 into law on January 14, funding all the agencies of the federal government. It is the first comprehensive budget passed since 2009. The budget undid many of the mandatory spending cuts imposed by sequestration, particularly in the physical sciences.

“The general principle was to roll back sequestration,” said Michael Lubell, director of public affairs at APS. “That’s essentially what happened.”

According to estimates by AAAS, non-defense research spending will increase by 7.6% over FY 2013 levels, or 2.5% over the 2012 pre-sequester levels. But when adjusted for inflation, it is actually about 1.5% below 2012 levels in real dollars. 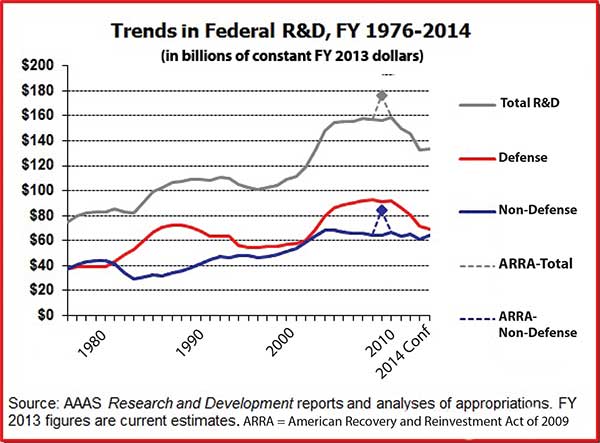 “I think a lot of these agencies are, I think its safe to say, ahead of the curve a little bit,” Hourihan said, adding that many of the increases were moderated by inflation. “I think hopes needed to be tempered.”

The National Institutes of Health, although they got a small bump, will remain about $700 million below 2012.

The Defense Department is the only research budget that decreased. Overall, DoD research will decline 1.6% from the 2013 mark , meaning a 10% drop from 2012. However, much of that decrease is from the department’s applied research accounts. On the other hand, basic research got a boost, increasing 8.1% over 2013 levels, which almost keeps it at pace with 2012 inflation-adjusted levels.

The National Science Foundation (NSF) received only a modest bump as well. Their $5.8 billion overall budget represents a 4.2% increase over 2013, and 0.9% over 2012. Within the NSF however, research spending grew 6.1% over 2013 and a 2.4% increase over 2012, meaning that their budget for construction of new facilities shrank.

“That’s one area where the physical sciences didn’t do quite so well,” Hourihan said.

The budget would restore NSF’s ability to award grants to near pre-sequester levels, but construction of new facilities could feel a pinch. Projects already in progress will be prioritized, potentially squeezing the Large Synoptic Survey Telescope (LSST), the NSF’s only construction project slated to start this year. But the project’s leader thinks that the cut from $27 million to $17 million won’t end up being an issue.

“The NSF is authorized to put additional money into the LSST if it can find it in their budget,” said Steven Kahn, director of the LSST, adding that he felt confident the NSF would reallocate enough funding to keep the project on schedule.

Researchers on individual projects that had been facing shutdown or a delayed start have hailed the budget. Within DOE, the domestic fusion research program was one of the top beneficiaries. For years the Department of Energy had to split its funding between domestic research and funding for the international ITER project in France.

“The domestic program has shrunk rather radically the last couple of years,” said Stewart Prager, director of the Princeton Plasma Physics Laboratory. “It restores the domestic research program funding to a little bit more than it was in fiscal year 2012.” He added that he felt that the budget represented a “turning point” for the field.

MIT has felt the brunt of the cutbacks. In 2013 their primary research tokomak, the Alcator C-Mod, was slated for shutdown as a result of budget cuts. The 2014 budget restores much of the funding for the program.

“Depending on how much funding we get…[we will] probably try to do between 12 and 14 weeks of research,” said Earl Marmar, division head of the Alcator project at MIT, adding it was still down from 19 weeks in 2012. “It’s very good news for us, but it’s also very good news for the whole fusion program.”

Brookhaven’s Relativistic Heavy Ion Collider also got a reprieve. It was facing funding cuts  after a DOE/NSF advisory panel gave RHIC a lower priority than other nuclear physics facilities that were straining the budget. At the same time, DOE said it was committed to keeping RHIC running.

“We’re absolutely thrilled — it’s not plush but it is allowing us to have a 22-week run this year,” said Berndt Mueller, the associate laboratory director for nuclear and particle physics at Brookhaven. “Having a full 22-week run is the best thing that could have happened.”

At Michigan State University, construction is about to move forward for the new Facility for Rare Isotope Beams (FRIB).

“The passing of the federal budget allows the commencement of construction of FRIB,” said Thomas Glasmacher, the project manager of FRIB. “Under a continuing resolution you can’t start–there are no new starts.”

One of the lingering questions hanging over the high-energy physics community is whether Fermilab’s new project, the Long Baseline Neutrino Experiment (LBNE), will have enough funding to bury its detectors in an underground laboratory in South Dakota. It is expensive to build and run large liquid argon detectors 4850 feet under Earth’s surface, and the Department of Energy’s office of science has previously balked at its billion-dollar price tag.

The omnibus budget doesn’t allocate funds for the detector, but it nearly doubles the $14 million budget to get construction started. There is still at least a $600 million gap in the funding to locate the detectors underground, but Strait hopes to partner with other nations to make up the difference.

“The big issue is to assemble a big international collaboration to allow us to do the experiments in a timely way,” Strait said. “The additional funding makes it look as if the US is serious about doing this.”

Looking ahead, experts said that it’s unclear if those trends will continue in the future. The president’s budget request is due out in early March.

“The FY 15 agreement is to keep spending frozen at more or less 2014 levels” Lubell said. “Except for the Defense Department, I think it will look pretty much the same.”

Hourihan agreed, but cautioned there was only so much about next year that can be divined from this year’s budget agreement.

“These FY 14 numbers may end up being a new plateau,” Hourihan said. “I think the chances of the increases we saw in the omnibus are pretty slim.”