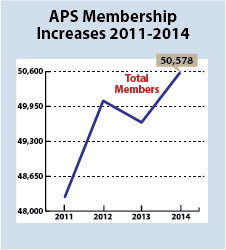 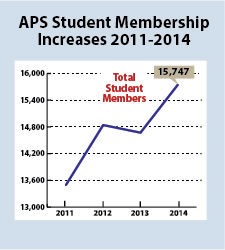 The American Physical Society hit a new membership record in 2013 with students making up the bulk of the growth. After completing its annual count, the APS membership department announced that the Society had reached 50,578 members, an increase of 925 over last year, following a general five-year trend. “When we were able to get up over 50,000 again, that was good news. That keeps us moving in the right direction,” said Trish Lettieri, the director of APS Membership.

Students were one reason: The total number of student members increased by 1,075 over last year. Lettieri credited much of that growth to enrollment stemming from the annual Conferences for Undergraduate Women in Physics (CUWiP). Undergraduate students who attended the conferences could sign up for a free year of student membership in the Society.

At the same time, the regular membership declined by 273 members, dropping from 23,138 in the beginning of 2013 to 22,865 this year. But the total number of members living abroad, which makes up about 23 percent of the total membership, increased from 11,319 last year to 11,492 this year. “A primary concern I have is turning our early career members into regular members,” Lettieri said.

One of the strategies is to build a greater sense of community early on by establishing a number of hyper-local regional groups for students and early career members so they can network about career options outside of the usual academic path. “It’s going to be a slow process in building up the regular member count,” Lettieri said. “But we’re moving in the right direction.”