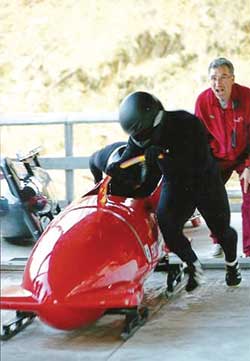 The need for speed. Physicists contribute their skills and passion to go faster, higher, stronger.

With the Olympics starting this month in Russia, one can’t help but think of the significant role physics plays in orchestrating this enormous affair. From equipment design, to ticketing and scoring algorithms, to the science behind the movements of the athletes themselves, the Olympics presents a great teaching moment. But while some may be keeping their eye on the physics of the games, others are more excited about the physicists who contribute to the Games and beyond.

Ida Bernstein is simultaneously working on her PhD in theoretical physics at Delaware State University, and training for a spot on the US National Team in rugby. An optical scientist with a NASA Fellowship, she specializes in the mathematics behind the use of different frequencies of light to combat viruses. She chose her research field so she could continue working on it while on the road in training and at competitions. As an algorithm designer, “I can do my physics anywhere in the world,” she says.

Bernstein has been a sports fan and an athlete for much of her life. She ran 5km races in middle school and as an undergraduate at Syracuse, she played varsity soccer and track. In recent years Bernstein focused on rugby and bobsled, with the objective of joining the US Olympic Team. “I trained for bobsled for two years and had the potential to be a pusher,” she explains, “I could have done more with bobsledding, but rugby had a hold on me.” In the fall of 2013, she made the choice to concentrate on training for the 2016 Olympics, during which women’s rugby will make its debut. But her immediate goal is to make the US team that will compete in the Women’s Rugby World Cup this summer.

Another bobsledding/physics fanatic, Louis Poirier, not only competed on behalf of his native Canada, but he also represented bobsledders on national boards and conducted research on ice friction as it relates to bobsledding. “I’m a typical scrawny physicist,” he jokes. Yet while on Canada’s national bobsledding team, Poirier medaled at the America’s Cup, among other events. And in 2006, he was part of two Canadian teams that trained for the Olympics, although he didn’t compete.

Poirier received his bachelors in physics from the Université de Moncton in 2003, and as he transitioned into graduate school at the University of Calgary, he was looking for an avenue to combine his two eclectic passions. “I knew I was uniquely qualified to study ice friction as it relates to bobsledding,” he says.

His thesis dealt with a problem in bobsledding as it relates to the safety of new tracks–“you really don’t know how fast the athletes are going to go once they’re on it,” he explains. So Poirier set out to analyze the aerodynamic dragging and ice friction coefficients and discovered that the coefficients were lower than anything published. “This was revolutionary data we detected,” he says. “Previously published reports suggested the coefficient of friction was always higher than 0.01 and we found it was half of that.” This suggests that the sleds go faster down the tracks than previously thought. He shared his investigations with the International Bobsled and Skeleton Federation, and his work will be featured in the track designs for the 2018 Olympics.

When Poirier finished his PhD in 2011, he found a position at the National Research Council of Canada — Oceans, Coastal, and River Engineering, where he applies his knowledge to the study of sea ice. Although he retired from bobsledding in 2008, he still watches the races and keeps up with the stats.

Having a career in sports with a physics degree is not limited to athletes. Adam Karnish, who received his BA in physics from Ithaca College, has been playing golf since he was six years old. “It’s always been a passion of mine,” he notes. He was on a championship team while in high school. Today he is a Handicap Research and Analysis Coordinator, where most of his work draws on his scientific problem-solving abilities. He travels the country teaching methods for rating the difficulty of the courses and helps implement a handicap system for that specific location. Currently, he is working on how to improve the pace of play and fix “traffic jams” on the course by taking a page from innovations in factory engineering. “The way a player moves through a course is the same way a car moves through a plant,” he notes.

Many of Karnish’s principal tasks are related to handicapping, which allows players to compete on an equitable basis. He serves on the USGA’s own handicap research team, which involves “lots of calculus, statistics and stochastic process” analyses, he says. Additionally, “the USGA saw my strength in physics and mathematics and created a position for me to develop a global handicapping system,” he explains. “We are developing a standardized procedure so a handicap is portable from one course to the next.”

And then there’s Timothy Gay, a professor of physics and astronomy at the University of Nebraska-Lincoln (UNL), whose research expertise lies in polarized electron physics. But he also wears another hat — a football enthusiast. He wrote the book Football Physics: The Science of The Game and produced a series of edutainment videos about the subject which played during UNL games and were eventually picked up and distributed by NFL Films.

Gay also consults for the industry. He has worked with major sports equipment manufacturers to help them improve padding in helmets, and has briefed the media on the physics of concussions. When one football helmet manufacturer was sued by another over potential patent infringement of a helmet design, Gay analyzed the evidence for the defendants. He discovered that previous comparisons of the two helmet designs were shoddy. “Physicists have a particular way of quantifying measurements,” he explains. “The [plaintiffs] had done crude measurements that I was able to demonstrate were not reproducible.” Gay conducted his own experiments related to the two helmets in question and “we were able to show they just made minor cosmetic changes to the helmet but didn’t violate the design patent.”

Gay has additionally contributed to videos for UNL on the physics of gymnastics and the physics of track and field. Despite his passion for sports, he doubts that knowledge of science necessarily improves the game playing. “It’s rare that my physics insight helps a player do better,” he says. “My chief intellectual interest is explaining [how things work], and figuring out how to explain it to a lay audience.”

Some physicist-athletes disagree and are steadfast that their prowess is directly influenced by their physics familiarity. “I have instincts from physics,” says Bernstein. “If I do something clever on the field, such as getting the other player to use their own velocity against them, it’s directly from being a physicist.” Karnish agreed: “Physics has made me a better golf player,” because it enables him to carefully scrutinize issues of trajectory, force and lift with every swing of his club. “During practice, I consciously think about these things.”

As for the future, the champion physicists all want to keep incorporating sports in their careers. “I love the game of golf, and I love the idea of improving it,” says Karnish. “The game has changed in the last 15 years and I like being where I am to have a real-time effect in getting more people involved in the game.”

Alaina G. Levine is the author ofNetworking for Nerds(Wiley, 2014) and President of Quantum Success Solutions, a science career and professional development consulting enterprise. She can be contacted through www.alainalevine.com, or followed on twitter @AlainaGLevine