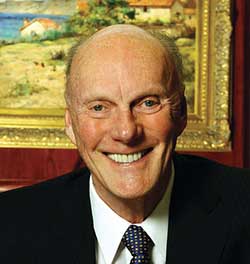 The story goes that Fred Kavli, industrialist, philanthropist and physicist, would look up at the night in his native Norway as a child and gaze at the stars that salted the skies. Being so far north, he had unique visual access to the universe, with long, dark nights that included the Northern Lights, which significantly influenced his decision to both study and support science.

“Physics meant everything to Fred,” says Robert W. Conn, President and CEO of the Kavli Foundation and an APS Fellow. “It was his love growing up. It was the underpinning for everything he did.”

On November 21, 2013, science, and more specifically physics, lost a great champion, when Kavli passed away due to complications from cancer. He was 86 years old.

Kavli was probably already hooked on innovation and entrepreneurship when as boy, he and his brother started selling wood briquettes as car fuel. This was before oil was discovered off the coast of Norway and the country became rich with petrol. But his real passion, says his colleagues, was science and support of discovery. “He said ‘if I ever get wealthy, I want to leave it all to science to help produce a better future for mankind,’” recalls Conn.

And that’s just what he did. After receiving a degree in applied physics from the Norwegian Institute of Technology, Kavli emigrated first to Canada and, after a year, to the United States. Three years later, in 1958, he launched Kavlico Corporation, which designed and sold sensors for myriad industries including the automobile, aerospace, and home appliance sectors. When he sold the company in 2000 for $340 million, he established The Kavli Foundation to advance science for the benefit of humanity and promote increased public understanding and support for scientists and their work.

Since that time, the Foundation has donated more than $200 million and established 17 institutes at universities across the globe that focus on fundamental research in theoretical physics, astrophysics, nanoscience, and neuroscience. It has also sponsored projects and programs that bolster scientific endeavors, from special symposia at both the APS March Meeting and April Meeting, to the NIH Brain Research through Advancing Innovative Neurotechnologies (BRAIN) Initiative, to science journalism prizes and travel fellowships.

And then there are the Kavli Prizes. Designed to parallel the Nobels, the Prizes are awarded every other year in Oslo in a partnership of The Norwegian Academy of Science and Letters, The Kavli Foundation, and The Norwegian Ministry of Education and Research. They recognize scientists for their seminal advances in astrophysics, nanoscience and neuroscience, and consist of $1 million for each of the scientific fields, according to the Kavli Prize website. “Fred was proud to say (in jest) that the Kavli medal was 1 mm larger than the Nobel medal,” says Michael S. Turner, APS Past President.

For the people who knew Kavli, his actions as a zealous benefactor and advocate on behalf of basic research is not bewildering. “He believed that philanthropy is crucially important to moving science forward,” says Conn, “and through science, the world becomes a better place.”

“Fred was proud of the fact that he was a physicist,” says Kate Kirby, APS Executive Officer. “He really saw the value of physics and was so concerned that physics should receive the kind of support it needed. Through the established institutes, he helped bring important researchers together to work on fundamental problems. It’s wonderful to see a Foundation focused on basic science.”

The Foundation’s gifts to the Kavli institutes are almost always unrestricted, says Conn. The endowments which support the institutes, including the Kavli Institute for Theoretical Physics at UC Santa Barbara (the first established), provide about $400,000 annually in income, designed to seed research that otherwise might not be funded.

Case in point: the South Pole Telescope (SPT), an early endeavor of the Kavli Institute for Cosmological Physics at the University of Chicago, which Turner heads. The SPT examines cosmic microwave background (CMB) radiation and galactic evolution and structure. Since taking first light in 2007, the telescope has provided physicists with unique insight into the early universe, including new knowledge concerning stellar and galactic formation and evolution, which has led to a better understanding of dark energy and stronger tests of inflation. But the project never would have gotten off the ground, notes Turner, had it not been for the seed money from the Kavli Foundation. “We leveraged the gift from the Foundation to allow us to go after a $40 million grant from the National Science Foundation,” which resulted in the telescope being built, he adds. “It enabled an incredible range of research on CMB and discoveries of clusters of galaxies.”

Kavli is described as “extraordinarily smart, disciplined and determined,” says Conn, which served him well in his various pursuits. In 2008, when the economy tanked, and the Foundation’s assets decreased in value, “Fred came in everyday like a day trader to try to get the funds back up,” says Turner. He was known for his frugality. The Foundation, “a lean and mean machine,” he adds, has a staff of only six and its headquarters are in a nondescript office plaza in Oxnard, CA, by design. Kirby recalls hearing that Kavli never flew first class: “He said ‘it’s such a waste of money, which could be used to support science.’” But he did find pleasure in certain material outlets. “He loved driving his Bentley,” says Turner with a laugh.

As for the future of the Foundation, Conn says that Kavli left a final surprise. “We knew Fred would leave money to the Kavli Foundation, but we didn’t know how much,” he says with a chuckle.

In fact, “Fred left the entirety of his estate to the Foundation. We expect in the next three to five years to be spending two to three times what we’re spending now. The Kavli Foundation is here to stay and will continue to support science, and now, at an even larger scale.”

“Fred took sheer joy took in supporting basic research,” says Turner. “He realized what a gem he had in these institutes and that this would be his greatest legacy. He always spoke about the Kavli Institutes as his children.”