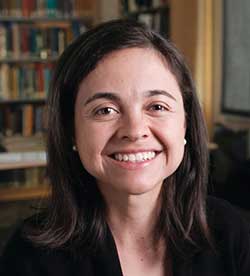 In addition to a certificate honoring her achievement, Rey will receive a $2,500 stipend plus $4,000 in travel allowances to be used towards speaking at up to four U.S. universities and at an APS meeting.

Rey is an atomic, molecular, and optical physicist working at JILA and the University of Colorado. Her research focuses on optically trapping alkaline atoms and polar molecules. This work could serve as the basis for future atomic clocks, as well as quantum simulators, which are possible stepping-stones to quantum computers.

She was born in Bogota, Colombia and has enjoyed physics since she was young. “I love to be able to write an equation, and nature behaves as I predicted,” Rey said.  She liked solving these kinds of equations so much that in her teen years, she found herself needing more from her physics class.

“I was in high school, I loved physics and I asked the high school teacher to give me more problems,” Rey said. “He borrowed a physics book for me that I used to do more problems besides the ones assigned from the class.”

She attended the Universidad de los Andes in Bogota where she majored in physics. It was there also she met her husband, Juan. After finishing, she decided to travel abroad to continue her education. “I wanted to come to the United States to learn more,” Rey said. “At that time there was no graduate program in Colombia.”

She set her sights on the University of Maryland and as luck would have it both she and her husband were accepted into the school. The two moved to the US in 1999. However, at that time, the university had limited options for the field she wanted to go into.  “When I graduated the formal program started in atomic, molecular and optical physics.” Rey said.

To compensate, Rey took a job at NIST in nearby Gaithersburg, Maryland to get experience in this field. There she worked on the theory of optical lattices and ultra-cold atoms. She received her PhD in 2004.

She did her postdoc work at the Harvard-Smithsonian Center for Astrophysics. After three years there, she left for Colorado and is now a fellow at JILA and an associate professor in the University of Colorado’s physics department.  Rey was named a MacArthur Fellow in 2013.

As a theorist, she is noted for her willingness to work closely with the experimentalists. “The groups are downstairs so you can just go into the basement and talk to them,” Rey said. “This collaboration has been stronger in the last couple of years.” In addition to her work, she also spends time raising her four-year-old son Nicholas.

Rey said that she was honored by the recognition of her work, and was looking forward to using the Maria Goeppert-Mayer Award to help advance her research. “There are collaborators around the world, in Europe especially, that are doing experiments with alkaline atoms and collaborating more closely with them could be very interesting,” Rey said.