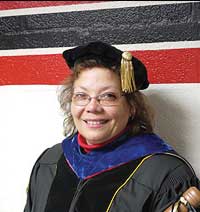 Courtesy of University of Maryland

Luz Martinez-Miranda, this year’s recipient of the Edward A. Bouchet Award, always knew she wanted to go into science. She was born in Maryland, moved to Puerto Rico when she was five, and is now a professor of materials science at the University of Maryland.

The APS Bouchet Award recognizes a distinguished minority physicist who has made significant contributions to physics research.  Martinez-Miranda will receive a stipend and travel support to present a lecture at the APS March Meeting.

Growing up, she assumed she would follow in her parent’s footsteps. “I got interested in physics because I was originally interested in chemistry,” Martinez-Miranda said. “My parents were chemists.”

She also credits her grandmother with inspiring her career in science. Her grandmother’s formal education stopped at the third grade, but she always insisted Martinez-Miranda’s mother go to college. “This is something that I consider very important,” Martinez-Miranda said. “It’s because of that my mother went and studied chemistry.”

Her high school teacher’s somewhat unorthodox way of teaching physics first got her thinking about physics as a career. Instead of focusing on inclined planes or free-falling balls, he delved into the refraction and reflection of light.

“He actually went into the optics part of physics,” Martinez-Miranda said. “I think that…optics, which is more visual and more associated with physical phenomena…made it more attractive to me.”

When she went to college she combined her parents’ love of chemistry with her own love of physics. At the University of Puerto Rico she majored in physics and minored in chemistry, which turned out to be a prescient decision. By her sophomore year she knew she wanted to explore the experimental side of physics.

In addition, Martinez-Miranda always had an eye for the artistic, or rather an ear. As an undergraduate, she also studied piano and graduated with a bachelor’s of music from the Conservatorio de Música in Puerto Rico.

Once she finished her master’s in physics, also at the University of Puerto Rico, she left for the Massachusetts Institute of Technology for her PhD. Upon arriving, she found a number of researchers there working with liquid crystals. Again, her artistic side came out: she was taken by the intricate beauty of liquid crystals she saw under a microscope.

“Liquid crystals are very interesting materials,” Martinez-Miranda said. “If you look at them in a microscope, they’re visually very attractive.”

The more she worked with the crystals, the more her background in experimental physics and chemistry came in handy. “I think that the field of liquid crystals requires [this combination] more than many other fields,” Martinez-Miranda said.

After receiving her doctorate, she left for the West Coast to do her postdoc work at the University of California, Berkeley. “At MIT I was working on just the basics of liquid crystals,” Martinez-Miranda said. “At Berkeley they were looking at it from the point of view of how liquid crystals interact with a surface….I went from being very basic to applications.”

She then spent a year as a visiting professor at Kent State University at their liquid crystal center. While there, her research interests started to evolve. She started working on thin films as well and when she took a position at the University of Maryland, she expanded further into work on nanoparticles. “Studying nanoparticles is in a way very similar to doing a thin film study,” she said.

In the process, she moved back toward basic research and away from finding immediate practical applications. “I am way [over] on the fundamental side,” Martinez-Miranda said. “I’m interested in finding out how nanoparticles and films interact and how can you modify the interaction.”

Her work on the interaction of liquid crystals and nanoparticles is helping to lay the groundwork for future generations of electronics and medicine. “It has applications not only in biophysics, but also in photovoltaics and many other fields,” Martinez-Miranda said. One potential route is to use these materials in display devices.

She said that she’s also excited about a new collaboration with a chemist in Chile, which pulled Martinez-Miranda toward another new direction. Up to this point, all of the materials she’s worked with have been monomeric, but now she’ll start exploring the potential applications of polymer liquid crystals. She said she expects that the mechanical properties of polymers could lead to entirely new applications.

She is also excited about the chance to travel to different universities and share her research as part of the Bouchet lectureship. She has already put together a list of schools she hopes to visit, many of which have large Hispanic populations. In addition she is also planning to lecture at the upcoming meeting for the Society for Advancement of Chicanos and Native Americans in Science (SACNAS).

“The APS meetings are described as general meetings, but they are specific to [physics],” Martinez-Miranda said. “The nice thing about the SACNAS meeting is you get all of [the sciences].”