December: Women and the Nobel Prize in Physics 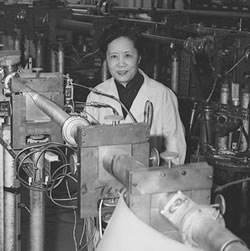 Chien-Shiung Wu in her laboratory

Later this month, physicists Peter Higgs and François Englert will travel to Stockholm to receive the 2013 Nobel Prize in Physics for their development of the theory of how particles acquire mass — a theory confirmed in 2012 with the discovery of the Higgs boson at the Large Hadron Collider at CERN. It is among the highest achievements in physics. Since the first Nobel Prize in 1901, 196 physicists have been so honored, all most deserving of the honor — yet all but two of them have been men.

The most famous female physics laureate is the first: Marie Curie, honored with her husband, Pierre Curie, and Henri Becquerel in 1903 for the discovery and subsequent research on radioactivity. Following her husband's untimely death, Curie went on to win a second Nobel Prize in 1911, this time in chemistry, for her discovery and isolation of a new element, radium, as well as her discovery of polonium.

It would be more than 50 years before the second female physics laureate was honored: Maria Goeppert Mayer, who inspired an eponymous APS award. As a young girl in what was then Prussia, Maria Goeppert attended a suffragette-run high school founded for the purpose of preparing young women for university studies. When that school abruptly went bankrupt, she took the entrance exam a year early, and passed, enabling her to pursue her education at the University of Göttingen. At the time, Emmy Noether was teaching there, and Goeppert initially studied mathematics before choosing to get her PhD in physics in 1930.

She married Joseph Edward Mayer that same year, and the couple moved to The Johns Hopkins University where he had been offered a faculty position. Despite her academic success, Goeppert Mayer worked as an assistant in the physics department, which at least provided her with access to research facilities. She published a seminal paper on double beta decay in 1935. When Mayer was fired in 1937 and moved to Columbia University, she once again was not given a similar position, although the physics department provided office space, and she found plenty of brilliant colleagues with whom to collaborate, including Harold Urey, Edward Teller, and Enrico Fermi.

It wasn't until the couple moved yet again, to the University of Chicago, that Goeppert Mayer finally attained the rank of physics professor — albeit without a salary. She also worked part-time as a senior physicist at Argonne National Laboratory, located nearby. This was the period during which she developed her Nobel-worthy mathematical model for the structure of nuclear shells, explaining why certain "magic numbers" of nucleons produced especially stable atomic configurations.

Despite the obstacles she faced as a woman in a overwhelmingly male field, Goeppert Mayer's story has a happy ending. In 1960, she joined the faculty of the University of California, San Diego, as a full (paid) professor of physics, along with her husband. That is where she was working when news broke that she had won the Nobel Prize in 1963; the local San Diego newspaper featured the headline, "S.D. Mother Wins Nobel Prize." (A German physicist named Hans D. Jensen had independently proposed a similar model around the same time. They shared the Nobel with Eugene Wigner.) She maintained that "winning the prize wasn't half as exciting as doing the work itself" — a fitting sentiment for someone who pursued groundbreaking physics research with little professional reward for much of her career.

There is always contention when it comes to determining who deserves to share in a Nobel Prize, but women have historically been excluded more than their male peers. One name that usually crops up when physicists consider deserving female colleagues who failed to win is Lise Meitner, who worked on nuclear physics research for more than 30 years with German chemist Otto Hahn. Being Jewish, she was forced to flee Nazi Germany for Sweden in 1938, but she continued to collaborate with Hahn through correspondence. Her guidance was critical to the experimental discovery of nuclear fission, but Hahn alone received the 1944 Nobel Prize in Chemistry. Meitner never won, despite being nominated several times in both the physics and chemistry categories.

Then there is Chien-Shiung Wu, who specialized in weak interactions and undertook the pivotal experiments on Cobalt-60 atoms with colleagues at the National Bureau of Standards that demonstrated unequivocally that parity was not a symmetry of nature. As the work came to a head, Wu even skipped a long-planned trip back to China with her husband, recognizing the importance of the experiment, commuting between her teaching duties at Columbia University and the laboratory in Washington, DC. On a snowy Christmas Eve in 1956, she reported the large asymmetry she had observed to her Columbia colleague, Tsung-Dao Lee, who had laid the theoretical groundwork for the discovery with Chen Ning Yang. Lee and Yang won the 1957 Nobel Prize in physics for their work; Wu was not included.

One of the current top female contenders for a Nobel Prize is astronomer Vera Rubin, whose work with Kent Ford on spiral galaxies in the 1960s and 1970s provided the first direct evidence of the dark matter predicted by Fritz Zwicky in a 1933 paper. It is the heavily favored theoretical explanation for such observations, sufficient to snag Rubin a National Medal of Science and membership in the National Academy of Sciences. Perhaps her chances would improve if a dark matter particle were detected in the near future. She seems satisfied with her life's work, regardless. "Fame is fleeting," she told Discover magazine in 1990. "My numbers mean more to me than my name. If astronomers are still using my data years from now, that's my greatest compliment."

The only field honored with a Nobel category that has fewer female recipients than physics is the prize for economics (which wasn't established until 1968); just one woman has received the economics Nobel: Elinor Ostrom in 2009. The chemistry prize has been awarded to just four women to date. In contrast, 10 women have received the Nobel in medicine or physiology, and 12 women have won in literature. Times have changed; there are far more women doing important work in physics today than when Marie Curie and Maria Goeppert Mayer blazed the trail. Surely some of that work will prove to be Nobel-worthy one day.