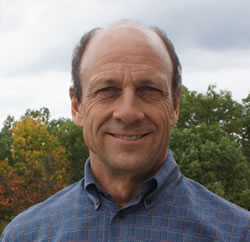 In September APS launched its Industrial Physics Fellowship, which brings an industrial physicist to its College Park headquarters. Steven Lambert is the first physicist selected for the Fellowship. Michael Lucibella of APS News spoke with Lambert about what this new fellowship will mean for the Society, and what his goals will be during his tenure in the position.

What is the Industrial Physics Fellowship?

APS wants to have more engagement with physicists who work in industry. My background is in using my physics training to do technology development and product development in the hard-disk-drive business. I will bring that kind of perspective, so that we can improve our engagement with physicists working in companies that use physics, which is almost everybody, and enhance the services that we can provide to people doing that kind of work.

Tell me about your background and how that brought you here.

It's not an obvious path actually. I got a PhD in low temperature physics at the University of California in San Diego. My work was very fundamental, on how magnetism and superconductivity interact with one another. After finishing a postdoc in that same group, I went to IBM where I began doing research on hard-disk-drive technology. My first project was trying to understand the limits of that technology. The work we did said this is quite extendable, because there had been some debate about how far this could be extended. I've been in the hard-disk-drive business ever since. I spent four years at IBM Research, and since then I've been in more of a technology or product development framework. What that means in industry is what kind of technology is needed to continue our product development? Sometimes that is two years out, five years out, sometimes it's next week. "We need a solution for this now because we're having this issue in our factory." I've seen that full range, from "What are the esoteric limits for this technology?" to "What do we need tomorrow?".

What are the aims of the new position?

APS has structured this to be a one- or two-year fellowship, and the intention is to bring in people with different perspectives from the world of industrial physics. I'm happy to be here for a year; if I get extended for a second year that would also be fine with me. I'm excited to be participating in this and bringing this perspective to APS, which traditionally has been rather focused on academia, with some attention to the national labs. People in industry don't really have much visibility in this building, and I'm happy to bring that perspective.

What have you been working on so far and what are some of the first things you hope to accomplish?

My first job is to figure out what my job is. Since this is a new position, there is not a clearly defined set of things to execute, but the overall objective [and] the success metrics are the number of physicists working in industry that are engaged with APS and how effective we are at serving the needs they have. Among the first steps are: What are the things that people want? What would make APS an effective organization for people who are working in industry? What sort of outreach should we have to people who are using physics in industry? A particular focus will be on engaging with people early in their career. What happens today is many people are members of the Society of Physics Students and join APS as a consequence of that, but they sort of wander off and go into industry. Most people earning physics degrees these days wind up in industry and so we would like to be more effective in encouraging undergraduate and graduate students who have studied physics to maintain some kind of connection with APS. To do that, we need to offer things they're interested in, whether that's career guidance, information about industry, or highlighting the things we do to support physics teachers. We need to figure out what those things are that would be an effective value proposition for people to maintain a connection.

What are some of the other ideas you might be thinking about to get industrial physicists engaged with the APS?

One thing that has happened already, which I had nothing to do with, was starting up Physical Review Applied. This is a brand-new journal. It's really targeted at people who are more focused on the applications of physics, rather than fundamental research. That is an indication of a much more open interest in the applied world. That's one thing that's already under way. There's also been some suggestion of having more awards and prizes that might be focused on people working in industry. Some of that work is under way. I think the main thing is to understand what the needs and requirements of this cohort of physicists should be, and I'm fortunate to be able to work with the Forum on Industrial and Applied Physics. Mark Bernius and John Rumble are the present and incoming leaders of that, and their mission is to engage with physicists working in industry. How do we solicit information from people and start to develop a value proposition that people would be interested in?

Long term, how do you see this position affecting the roles of APS and industrial physicists?

For me success would be that more people in industry are involved in APS and as a consequence that APS has a broader view of what is "physics" and what is important in the world of physical science and that there's a voice which I think is mostly lacking these days, as to what is going on in the industrial world. That would be success.

I don't want to give the impression that there's nothing happening. It's really to enhance the efforts that are under way. I'm really pleased that APS wants to do this. I have been an APS member since 1980, all during the time I've been working in industry, but I haven't been to an APS meeting since 1987. I wanted to be attached to the world of physics, it's part of my identity as a scientist and an engineer, and so I would like to find reasons that others would choose to maintain that same attachment.