Ed. Note: Each year APS sponsors two Mass Media Fellows as part of a program administered by the American Association for the Advancement of Science (AAAS). They each spend ten weeks over the summer working as a science reporter at a media outlet. This year's Fellows, Elizabeth Case and Jenny Laaser, worked at The Oregonian and the Milwaukee Journal Sentinel, respectively. They write about their experiences in the articles below. 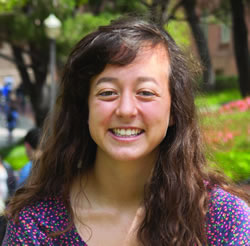 Going into the AAAS Mass Media fellowship, I was hoping for a fully-immersive journalistic experience: one that would teach me the ins-and-outs of a longstanding professional newsroom. At The Oregonian, that's certainly a piece of what I found –but it barely hints at everything I learned this summer.

From experiencing the instant community with other AAAS Mass Media fellows to witnessing newspaper layoffs firsthand, I happily rode out the few lows and numerous highs of this rollercoaster summer. As August comes to an end, I'm left reeling a bit from the excitement, committed to becoming a journalist.

Portland and The Oregonian held nothing back, welcoming me to the summer with a characteristic Northwest shower that drenched my first interview. With my recorder wrapped in a thin black jacket, I spent an hour and a half documenting the deaths of 50,000 bumblebees. This first story, headlined on the front page, turned out to be my biggest of the summer, and the attention it received sparked new pesticide regulations and legislation.

My work on the bumblebees resembled much of the work I did for the paper: integrating science into everyday stories. While my scientific background helped me question the methods and models used by local researchers, activists, and public servants, the challenge from there was to figure out why these people and events were important to readers. Ultimately, as a reporter at a regional paper, my goal was to find the intersections between science and local society.

Despite the slow decline of the science desk in traditional newsrooms, readers clearly resonated with the science and environment focus. Maybe it had something to do with being in the Northwest, but I received frequent emails, phone calls, and even a real letter, from readers concerned about pesticides, sending me information on gun statistics, asking questions, asking for more of the same coverage. The articles I wrote often prompted hundreds of comments, with (sometimes) high-quality conversations. It was so exciting, to see people so excited.

During the rest of the summer, I covered Obama's climate change speech, honeybee breeders, mummies, invasive species, wave energy, and contentious public hearings about coal exports. And each article I published, each interview, the thrill of reading reports, made me more and more certain that the newsroom is the right place for me right now. I get to learn so much science every day.

I still have six more months until I can hold my bachelor's degree in physics high in the air and I'm thrilled to have that time to learn as much as I can. Then, armed with the skills I've learned in the classroom and from this past summer, I'll see what I can do about making this into a career. 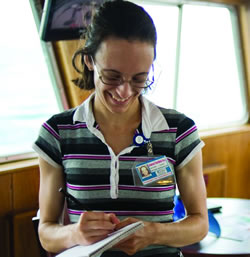 One of the first pieces I wrote for the Milwaukee Journal Sentinel–a blog post on how loggerhead turtles track their prey–came back from my editor with a note saying, "needs a sentence about loggerheads–how big? where do they live?"

But sometimes, I also went too far in the other direction.

Several weeks later, I wrote a long story about the tests for testosterone used as a performance enhancing drug in baseball. That story came back with notes in several places telling me that I was "too far down in the weeds"–i.e., giving too many details, ones that didn't add much to the argument and just made the story drag.

That story went from almost 5000 words in the first draft, to less than 3000 in the final draft.  Many of the details I found fascinating as a scientist–for example, why a certain genetic variation makes it easier for players to beat testosterone tests–landed on the cutting room floor.

And while I bemoaned their loss, paring things down ultimately made the story much more interesting for the news audience.My editors and I repeated this process many times over the course of the summer, and I got much better at gauging the level of detail that was necessary and appropriate in each of my stories. In the end, these experiences really emphasized for me that good science writing is just as much about understanding your audience as it is about being able to explain the science itself.

What do your readers know, and what will they find interesting?

Now, as I slip back into my academic mindset after my "summer vacation" in the newsroom, I am trying to remind myself that these questions aren't restricted to writing for the general public. Keeping the audience in mind is critical as a research scientist as well.

I'm still learning how to navigate this, as an academic. But I know that I don't want to be that speaker at a conference who loses half the audience because she didn't give enough background, and then throws in so many irrelevant details that the other half of the audience tunes out.

As I go forward, I will look back at my summer in the newsroom and remember how critical it was to think about the readers in order to write a compelling, informative, and accessible news story. And I'll ask myself two questions:

What does my audience know? And what will they find interesting?