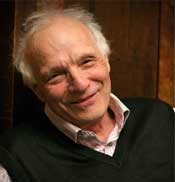 An imprisoned Iranian laser physicist and a Russian scientist who devoted his life to the struggle for democracy and the rights of neglected children are the recipients of APS's 2014 Andrei Sakharov Prize. The award recognizes the efforts of scientists to advance human rights around the world.

"It's for people who have fought for and contributed to the human rights of scientists and human rights in general," said Joel Lebowitz, a physicist at Rutgers University and Chair of the award's selection committee.

Omid Kokabee, once a graduate student at the University of Texas in Austin, is now serving a ten-year prison sentence in Iran for "communicating with a hostile government" and possessing "illegal earnings" in the form of his college loans. Kokabee, who is an Iranian citizen, was picked up at the Tehran airport in January of 2011 and put on trial months later. After he was sentenced, he revealed in an open letter that the Iranian government had approached him on several occasions asking him to work for the military. He refused each time, and believes that is the real reason he was arrested.

"He is becoming, if not already, a symbol or icon of the pursuit of science free of political pressure," said Hossein Sadeghpour of Harvard-Smithsonian Center for Astrophysics, who nominated Kokabee for the award. He added that he nominated him because of "what he did in prison, in captivity. For not succumbing to the pressure to confess to crimes that were alleged against him, and for writing open letters which give us a window, at least partly, [into] why he was kept for refusing to participate in military research work on banned weapons."

He is the first Sakharov Prize recipient incarcerated at the time of the announcement. His affiliation on the award reads "Evin Prison, Tehran."

Boris Altshuler was a close friend and colleague of Andrei Sakharov at the Lebedev Institute in Moscow. The two worked together in the late 1970s advocating anti-authoritarian reforms within the Soviet Union. After Sakharov was arrested and sent into internal exile, Altshuler became his biggest advocate, organizing petitions and publicity for the scientist turned activist.

"When Sakharov had his struggle for human rights, Boris Altshuler was very much involved with that," said Eugene Chudnovsky of the City University of New York, and a member of the selection committee. "He didn't have the standing of Sakharov. He could easily have been sent to prison for many years."

The Soviet government attacked Altshuler's professional career because of his activism. For five years in the mid-eighties the physics professor was demoted to staff janitor at the Institute on the urging of the KGB. After the fall of communism, he continued to advocate for human rights in Russia. In addition, he established "The Right of a Child," to reform and raise awareness about the country's troubled foster care system.