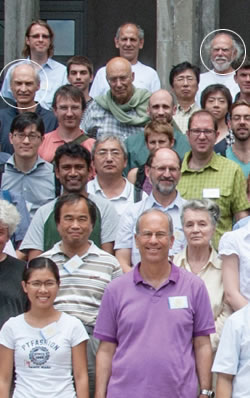 APS President Michael Turner traveled to Vietnam in August and met with the head of the Vietnam Physical Society. They agreed that there are many ways for the two Societies, and the two countries, to work together on future scientific initiatives.

Phan Hong Khoi, president of the VPS, said that he hoped to see the two Societies work together to train young scientists, establish future workshops and conferences and generally improve the scientific dialogue between the two countries.

Turner said he also saw many areas for cooperation between the APS and the VPS. "It's stunning that there are so few Vietnamese physicists that are part of the APS."

While the VPS has a membership of more than 1000, there are currently only three APS members who reside in Vietnam. After their meeting Turner said that he would like to boost that number to 30 APS members.

"Asia is one of the fastest growing regions in terms of physics," Turner said. "I think Vietnam will be right in there."

In recent years, the economy of the country has been growing rapidly, and its leaders have been talking about increasing their investment in scientific research. Turner was in Vietnam to represent APS at the opening of the new International Center for Interdisciplinary Science and Engineering (ICISE) in Quy Nhon. Its inaugural meeting, "Windows on the Universe," was organized by renowned physicist Trần Thanh Vân.

"The purpose of the meeting was to dedicate this new center that Trần Thanh Vân had started," Turner said. "Now that Vietnam is really starting to take off, he convinced the regional government to provide the land and the money for the meeting."