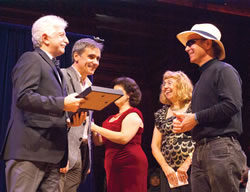 Nobel laureate Frank Wilczek (right) presents Alberto Minetti (left) and Yuri Ivanenko with the Ig Nobel Physics Prize for their research on how humans could run across a pool of water on the Moon.

The annual Ig Nobel awards, presented in mid-September, honored the year's best and wackiest science. Awards went to researchers who ate a shrew for science, played opera for mice and stuck small hats on the heads of dung beetles.

The winners of the Physics Prize discovered that a human would be able to run across a pool of water on the Moon. Alberto Minetti from the University of Milan and his team used a harness to suspend volunteers wearing plastic fins on their feet over a wading pool."

We could vary their load so we could simulate different planets," Minetti said. "We found that in gravity lower than 20 percent of Earth's gravity you can stay afloat. Only for a few seconds."

The test subjects ran in place trying to use the water's surface tension to stay afloat. It's a trick used on Earth by water-skimming insects and even small lizards, and maybe someday astronauts living on the Moon.

"The study helps us also understand what is happening on Earth for those species that are able to run on water," Minetti said.

The Ig Nobel Prizes were started twenty-three years ago by Marc Abrahams, then at Science Magazine, to highlight science that "Makes you laugh, then makes you think." The idea is to recognize science that might seem silly or frivolous at first, but is properly carried out and relevant.

The Probability Prize given to Bert Tolkamp and his team is an example. They won for their work analyzing the time and frequency that cows stand up and sit down. "We looked at animal behavior and changes in animal behavior because we're very interested in early detection of health and welfare problems in cows," Tolkamp said. He added that as large farms are becoming more automated, farmers can use this research to design sensors and algorithms to better track the health of cows.

Brian Crandall, formerly at Binghamton University, who now runs the Mad Science educational company, received the Archeology Prize for his work. His had a lab assistant eat a small, parboiled rodent, and studied the effects of the human digestive system on its bones.

"We convinced someone to eat a shrew. We let them digest it, and we collected what came out the other end, filtered out the bones, and analyzed them,"

Crandall said. Crandall called it "experimental archeology." Piles of small mammal bones have been unearthed in archeological sites around the world, and researchers have puzzled over whether or not our ancestors ate them. Based on the way bones were digested, it seems that small mice, rats, and voles were very much a part of the human diet in ancient times.

Other winners this year included: