All Five US Physics Olympians Come Home with Medals 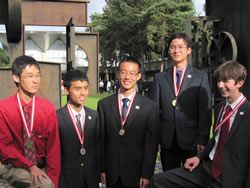 The United States placed high in the standings at the annual international competition of high school physics students. The five-person US team brought home three gold medals and two silver medals from the International Physics Olympiad held this year in Copenhagen, Denmark.

"It was a good year," said coach Paul Stanley of Beloit College in Wisconsin. "We probably did slightly better than we did last year."

Officially the Olympiad is an individual competition between students, and the national rankings are informal standings. This year the United States tied with Thailand and Taiwan in unofficial medal count standings. China placed first overall with five gold medals, while Russia and Singapore tied for second each with four gold and one silver.

Individually US students did well, with one student placing fifth overall and another placing eighth overall out of the roughly 400 students attending.

"It's been a while since we've had two students in the top ten like that," Stanley said.

Over the course of a week, the students were given a series of theoretical and experimental physics problems to solve. They're judged not just on whether they wound up with the correct answer, but the process they used to derive it as well.

"This is fun for them," Stanley said. "It's nice that they have an outlet for this form of enjoyment."

"The most exciting thing is definitely the people from other countries," said Kevin Zhou, of the High Technology High School in Lincroft, New Jersey. This was his second time competing at the Olympiad, and he placed fifth overall. "The test is not the big emphasis."

The students were treated to trips to local museums and historical sites around Copenhagen. Researchers from the Niels Bohr institute came and spoke to the Olympiad participants.

Calvin Huang from Gunn High School in Palo Alto, California, placed first overall in the experimental competition, which had two parts. The first dealt with the speed of light, and in the second, students were given solar cells and a related series of questions.

"I feel quite good about it. It's nice to think that I'm the best experimental physicist in the world," Huang quipped. He added that he particularly liked the last question dealing with solar cells, which asked the students to determine water's index of refraction by measuring the change in current when a container of water is placed between the solar cell and the light source.

Stanley said he felt that over the last five years Olympiad questions have gotten more creative for the students. Instead of what he calls "cookbook" questions, where students plug in a long series of prescribed equations into their calculators, he's seen more abstract questions where students have to infer their own problem-solving methods.

"It was kind of neat dealing with questions that the organizers tried to make practical yet good," Stanley said. He said also that his favorite question asked the students to estimate the power of a meteor by analyzing video of it taken by a security camera.