Lord Rayleigh and the Discovery of Argon: August 13, 1894

"A searcher obedient to truth," he found a truth he was not searching for.

Ed. Note: This column has been contributed by guest author Richard Williams. 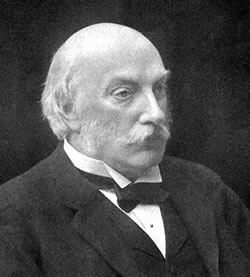 Lord Rayleigh was the title borne by John William Strutt, 1842-1919, who succeeded to the Barony of Rayleigh in 1873. He served as Professor of Experimental Physics at Cambridge University from 1879 to 1884, as the successor to Maxwell, and served from 1887 to1905 at the Royal Institution, London. Much of his research was done in his private laboratory at his home in Terling.

His work covered much of physics. Among the things named for him are Rayleigh Scattering, the Rayleigh-Jeans Equation, the Rayleigh Refractometer, and the Rayleigh Criterion for Resolution. His two-volume book The Theory of Sound, 1042 pages in all, published in 1877, was definitive at the time and is still in print. He was among the most eminent physicists of his era. What ultimately brought him the Nobel Prize was the discovery of argon. How this happened is one of the most remarkable stories in the annals of science.

As a physicist, Rayleigh tended to be direct and decisive, with a clear goal in mind. In the argon discovery, however, things were quite the opposite. His experiments were not aimed at the final result. He began by working to test Prout's Hypothesis from 1815, that the atomic weights of many elements were integral multiples of the atomic weight of hydrogen taken as unity.

The unusually difficult experiments are described in the biography, Life of John William Strutt, Third Baron Rayleigh, by his son Robert John Strutt. Rayleigh began by weighing hydrogen and oxygen gases to determine their densities. A 2-liter flask was evacuated, weighed, and then weighed again after being filled with the gas. Buoyancy of the room air affected the observed weight, and in turn was affected by the room temperature and barometric pressure. The experiments were done by a trusted assistant, closely supervised by Rayleigh himself, and went on for several years. His result for the ratio of the density of oxygen to hydrogen was 15.882, which appeared to Rayleigh to contradict the weight of 16 for oxygen.

To complete the study he then turned to what seemed like an easier problem, weighing nitrogen. The easiest way of obtaining the "pure" gas was to remove the other then-known constituents of air,  oxygen, carbon dioxide and water vapor, by chemical means. His result was in good agreement with a measurement published several years earlier. At this point, he made the decision that changed the entire course of the investigation. "With characteristic caution he wished to confirm the result by a different method of preparing the gas." He obtained the nitrogen by chemical reactions of ammonia or other nitrogen-containing compounds. The result was a surprise. After two years of work he had to conclude that nitrogen of chemical origin was always about 0.5% less dense than that obtained from air, well beyond experimental error. He was unable to explain it. His first report of it in Nature, 46, 512 [1892], began "I am much puzzled by some recent results as to the density of nitrogen, and shall be obliged if any of your readers can offer suggestions as to the cause." None was forthcoming.

Finally, William Ramsay, a chemist from University College, London, learned of Rayleigh's results. He proposed that air might contain a previously unknown heavy gas that was not removed by the chemical methods used to remove the other constituents. Around this time Rayleigh learned of an experiment by physicist Henry Cavendish in 1795 that hinted at an unknown constituent of air. Cavendish had mixed air with additional oxygen and passed electric sparks from an electrostatic generator through the gas, in contact with an alkali solution. This removed the nitrogen and oxygen. At the end of a long experiment a tiny bubble of gas remained. He suggested that the bubble was a non-reactive gaseous constituent of the atmosphere. The experiment was never repeated and was forgotten for nearly a hundred years. Rayleigh repeated the experiment with equipment that produced a stronger electrical discharge. This worked, and about a cubic centimeter of gas was accumulated. It did not show the slightest trace of the nitrogen spectrum nor did it show any chemical reaction.

Meanwhile Ramsay showed that red-hot magnesium removed both nitrogen and oxygen from the air. He accumulated enough of the residual gas to measure the spectrum, specific heat and other properties. Rayleigh and Ramsay combined their efforts and confirmed the existence of a new, inert, monatomic constituent of the atmosphere. Lord Kelvin called this the greatest discovery of the year. They announced their discovery at the August, 1894, meeting of the British Association for Science. These meetings were similar to APS meetings, with many contributions, all with abstracts of a hundred words or so. The Association's report of their research was curiously brief for such an important discovery. It read, in its entirety:

Monday, August 13 "1. A joint meeting with Section A was held, at which Lord Rayleigh, Sec. R.S., and Professor W. Ramsay, F.R.S., gave a preliminary account of a New Gaseous Constituent of Air."

Ramsay went on to discover He [known from the solar spectrum, but not previously known on Earth], Ne, Kr, and Xe.

This discovery brings to mind Alexander Pope's epitaph for Isaac Newton: "Nature and Nature's laws lay hid in night: God said, Let Newton be! and all was light." Argon and four other elemental gases lay hid in plain sight, there in every breath. Rayleigh's diligent physics and Ramsay's savvy chemistry brought all to light.

The name "argon" was proposed by H.G. Madan, from the Greek word, aergon meaning "inert" or "lazy". It is a contraction of two words, "a" and "ergon." The "a" is a prefix negating the following word, as in "apolitical," or, indeed, "atom." The "ergon" is "energy," as in the "erg" of physics.

Rayleigh and Ramsay each received the Nobel Prize in 1904, Rayleigh for Physics and Ramsay for Chemistry.