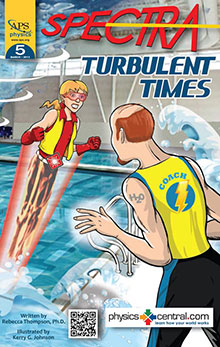 More about this year’s project

APS has announced the winners of this year's PhysicsQuest competition for middle school students. Taking the grand prize is Robert Capanna's fourth-period class at the Kiski Area Intermediate School in Vandergrift, Pennsylvania. The class won an assortment of physics gear from APS, and a $500 gift certificate to be redeemed at the school science suppliers Educational Innovations. In addition, each student received an iPod Touch.

"This year the class that won had been doing it for several years and were excited to get iPods for the whole class," said Rebecca Thompson, head of the APS Public Outreach Department.

Each year, APS sends out 13,000 free kits, one per classroom, to more than 3,500 teachers across the country. Each kit contains the materials for four experiments and a comic book starring the original APS superhero Spectra. Classes perform the experiments and send in their answers for a chance at winning the randomized drawing.

This year's theme was fluid dynamics and granular materials. The kits featured experiments about how cornstarch in water is a shear thickening non-Newtonian fluid while ketchup is shear thinning. Other experiments included investigating the "Brazil nut effect," building a vortex cannon, and testing the hydrodynamics of different shapes.

"One of the things that we did that was new this year was the Facebook group," Thompson said. "The discussion between teachers was extremely valuable.… It allowed everyone to see interesting uses for the kits and experiments.

"The experiments are designed to teach physics, and get students interested in learning how science works at the same time.

"Kids open the kits and get excited about the toys inside," Thompson said. "It's also teaching not just fluid dynamics but also broader ideas like how to design an experiment, the scientific method and investigation."

Second place this year went to the 2013 Henry Owen Science Students from the Shore Educational Collaborative in Chelsea, Massachusetts. They received assorted physics gear and a $300 gift certificate.

Third place went to Linda DeCarlo's eighth grade physical science class at the Sawgrass Springs Middle School in Coral Springs, Florida. They received a $100 gift certificate and physics gear. "It's really refreshing to find an organization that supplies a resource that is usable by itself," DeCarlo said. "This comes completely encapsulated…. I wish more companies would do something like this."