Brazil: I taught, I learned, I lived! 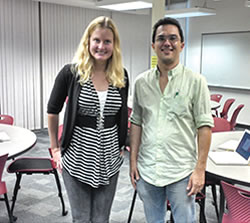 Katie Foote and host, Dr. André Vieira at the SCALE-UP classroom during his visit to North Carolina State University

As a physics PhD candidate at North Carolina State University specializing in physics education, I love to see how people teach and learn science, especially in other countries and cultures. The US-Brazil student exchange program—sponsored by APS and the Sociedade Brasileira de Física—immersed me in an exploration of Brazilian education at the secondary and university level, while I shared information about American educational innovations.

In May of 2011, another APS travel grant sponsored my trip to India to survey and interview women about studying and working in science. I enjoyed talking to students, women and high school teachers so much that I sought out the opportunity to collect similar data upon my return to North Carolina. There were remarkable similarities in the stories I heard, but the differences were intriguing. I decided to go to Brazil to add a South American perspective to these findings. While I was there, I gave three colloquia on SCALE-UP [Student-Centered Active Learning with Upside-down Pedagogies] to share my dissertation work. Along the way, I traveled to four cities and talked to representatives from five schools and universities.

My trip began with ten days in Brasilia, the capital of the country that was built in the middle of nowhere in 1960. It was carefully planned to look like an airplane from above and is filled with unique, modern architecture.  Reva Garg, a physics professor at the University of Brasilia (UnB) was my primary host and she welcomed me into her home as a long-lost daughter. Her primary research is in non-linear optics, but she has also published and presented work on women in physics. Her Indian background made her a perfect host for this cross-cultural project. After work, she and her husband would take me on cultural excursions to the national theatre and the famous Metropolitan cathedral, and make me the most delicious local foods and juices. Banana pizza with a side of freshly squeezed pineapple juice was probably my favorite, but it was a tough call!

While at UnB, I interviewed and surveyed dozens of undergraduate students and faculty members, compiling a collection of remarkable stories from women whose participation in physics spanned a half a century. Just as in the US, Brazilian women are dramatically outnumbered in the natural sciences. Recently, a couple of professors have been volunteering to develop programming to interest women in these fields, despite minimal outside support.

At UnB, I also met with the relatively new physics education group. They develop teacher-training programs, connect schools to community resources and engage students in research projects, mostly at the secondary level. They have also compiled over a hundred hand-made experiments and demonstrations as a physics-learning lab for visitors.

What I saw at UnB made me realize the ingenuity of individuals who wanted to share their love of science without many resources or much financial support, since improving education is only starting to become a priority for the Brazilian government.

I visited the private American School of Brasilia to see the "best-case" scenario of high school education in Brazil. The physics class felt like a SCALE-UP classroom: students worked in groups to collect real-time lab data, solve problems on whiteboards and present results to classmates. Unfortunately, active and collaborative learning opportunities are rare in Brazil, especially in public schools, because financial resources are tight and often, teachers are not trained appropriately. This was true even back in 1950, when Richard Feynman complained about the shallowness of education here, since he found students could only recall facts, not apply information.

Realizing that students need to do more than memorize information to be innovative, productive members of today's workforce, physics professors at the University of Sao Paulo (USP, South America's best university) applied for funding to implement SCALE-UP's minimal lecture, technology-rich, highly collaborative approach. I wanted to make sure to visit and see how they use this reformed pedagogy and classroom design. SCALE-UP has been spreading rapidly (currently to almost 200 institutions worldwide) and André Vieira had been inspired to try it at USP after talking to a collaborator at Duke University.

Sao Paulo's 12 million residents make it the biggest city in Brazil and one of the most diverse, blending indigenous, African, European and Asian heritages. Sao Paulo actually contains the largest population of Japanese people outside of Japan. I asked if ethnic diversity provided motivation for adopting SCALE-UP, since at NC State it significantly reduced failure rates for women and other traditionally underrepresented groups. USP professors are more concerned with handling differences in economic background and incoming knowledge, especially after recent affirmative action efforts. Universities are required to accept a certain percentage of students from public high schools, which historically provide a notoriously poor education, thus the preparation of students varies significantly.

My last meeting was with the Chemistry Education Group at Brazil's largest Federal University in Rio de Janeiro (UFRJ). The disparity between rich and poor is especially apparent in Rio, a city infamous for its favelas (slums).  Educating these students is a challenge, since many struggle with drugs, gangs, and lack of food and healthcare. The Chemistry Education Group has rapidly expanded its facilities to include computer labs and rooms for experiments for students whose schools cannot afford these supplies, and their outreach efforts keep growing.

Overall, Brazil and the United States face similar challenges as large, diverse countries trying to stay competitive in an increasingly technological age. I enjoyed the opportunity to share dialogue with Brazilians in a variety of positions about educating the next generation of scientists and engineers. I expect these collaborations to last a lifetime–I am working with my UnB host on a paper and Andre Vieira from USP came to visit my University to see SCALE-UP in action. Every time I said goodbye to someone in Brazil, they wanted me to promise to come back. I hope I will be able to return soon!