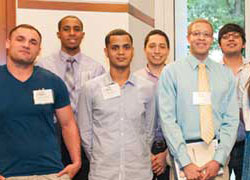 The APS Bridge Program (APS-BP) is committed to increasing the number of underrepresented minority students who receive PhDs in physics. In late June, APS-BP hosted a meeting that involved a variety of programs and organizations with similar interests. More than 60 people attended the conference, which took place at the American Center for Physics in College Park, MD. Attendees included representatives from APS, the American Association of Physics Teachers (AAPT), the American Institute of Physics (AIP), bridge programs, and colleges and universities across the US.

Although just getting underway, the APS Bridge Program has been able to facilitate the placement of at least 14 students into physics bridge programs or directly into graduate programs. Seven students were named Bridge Fellows at two newly selected APS Bridge sites, University of South Florida and The Ohio State University (see the report in the July APS News). Each site was also able to admit one student directly into their graduate programs. Students who applied to APS-BP were considered by other graduate programs as well, with sixteen offers of admission made to ten students. Five of these students accepted offers, and at press time five students have offers pending, leaving the potential of APS assisting possibly up to 19 students to enter graduate programs in physics during the first year of the bridge program.

The meeting was the first opportunity for newly selected APS Bridge Fellows to meet each other and site leaders at their respective bridge sites. Students are beginning classes, research, and other programmatic activities this summer.

"The conference was a great opportunity for collaborations– especially for students to network with each other and faculty as they begin their bridge programs," said Brian Beckford, APS Bridge Program Manager.

Newly selected Bridge Fellows also had the opportunity to interact with students from existing bridge programs at MIT, Columbia, Michigan, and Fisk-Vanderbilt. These students participated in a panel in which they candidly described their experiences, talked about how they fared with the GRE, and shared defining moments, among other topics.

Peter Henderson, Senior Advisor to the President at University of Maryland, Baltimore County, delivered the opening plenary at the meeting. Henderson discussed the National Academies Report "Expanding Underrepresented Minority Participation: America's Science and Technology Talent at the Crossroads." He explained why broad participation matters, and presented recommendations from the report. He also discussed UMBC's Meyerhoff Program, designed to increase diversity among future leaders in STEM.

William Sedlacek, University of Maryland, gave a talk on "What more do I need besides grades, test scores, and the right courses?" Sedlacek described the GRE as an insufficient predictor of graduate school success, and advocated using non-cognitive variables in measuring prospective graduate students. These variables include demonstrating leadership, having long-range goals, taking advantage of support networks, and being involved in the community, among others.

Leaders from bridge programs from around the country presented the nuts and bolts of their programs during a session on bridge program logistics. Summer Ash, Assistant Director of Columbia University's "Bridge to the PhD" Program, described the two-year non-degree program, in which students are hired as research assistants as they prepare for graduate school in the natural sciences. Çagliyan Kurdak explained that the University of Michigan Applied Physics Imes-Moore Fellows Program emphasizes program flexibility and personalized mentoring in preparing students to complete doctoral degrees in applied physics. Keivan Stassun said that the Fisk-Vanderbilt bridge program looks for basic content preparation and "grit" in students accepted into its two-year master's sequence, designed to lead to a Vanderbilt PhD.

The conference also featured sessions on research on mentoring, building community, generating administrative and faculty support, being a successful mentee, research/evaluation questions on increasing diversity, and admissions criteria and their correlation with success.

In a plenary talk, Valerie Purdie-Vaughns of Columbia addressed stereotype threat–the well-documented effect of scoring below ability in high-stakes measures when seeing oneself through the lens of a negative stereotype. She presented values-affirmation as a way of reducing stereotype threat by reminding people of sources of their self-worth.

Mandana Sassanfar described the two-year non-degree Biotechnology Biology Bridge (B3) Program at MIT, which provides students with research training in industry as well as rigorous academic preparation at MIT.

Philip Kutzko, University of Iowa, spoke about the National Alliance for Doctoral Studies in the Mathematical Sciences, which has similar goals to the Bridge program. It seeks to increase the number of students from "families, regions and ethnic backgrounds that have had little prior contact with the profession and culture of the mathematical sciences" who enroll in doctoral studies, earn doctoral degrees, and enter the workforce. The Alliance has built a sizable community of faculty mentors, math sciences students, and math sciences departments committed to promoting a diverse workforce.

The APS Bridge Program is funded by a grant from the National Science Foundation. The project anticipates holding another meeting next June, featuring the role of master's degrees in improving diversity.