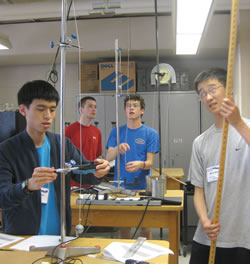 Nervous laughter filled the concrete hallway as twenty students poured excitedly out of a classroom at the University of Maryland in College Park. They had ten days to prepare–and compete–as physics Olympians.

The twenty high-school students, members of the US Physics Team, arrived in late May for intense training at the physics bootcamp. With faculty and former physics Olympians from the University of Maryland and across the country, the students spent mornings and afternoons working on theoretical calculations and performing detailed experiments as they strove to become one of the five members of the traveling team who will represent the United States at the 44th International Physics Olympiad this July in Copenhagen, Denmark.

Notwithstanding the underlying competition, the students found time to experience new friendships and to share their love for physics and mathematics.

“Have fun this week and enjoy the process,” urged Drew Baden, Chair of the University of Maryland Physics Department. “If you win, then you win and it’s over; taking part in and enjoying the process is what really makes a difference.”

The exclusive group at the bootcamp was honed down from 4,435 students who participated in the preliminary multiple choice F=ma exam, followed by a semi-final exam for the top few hundred. Most of the finalists had previously participated in international or national math or science competitions.

“It’s really different from my school at home,” said Zach Markos, a senior from Los Angeles CA, “I have one or two friends who are like these students, interested in math and physics. Everyone here is.”

“The level of the students has gone up every year,” said Paul Stanley, the team’s academic director and professor of physics at Beloit College in Wisconsin. The students are so good, he noted, that he and the other coaches spend a lot of time developing new questions to keep the students properly challenged.

For Stanley, much of the value of the Physics Olympiad is in the training camp itself. Over the past decade, the focus of the international competition has shifted away from cookbook questions and migrated back towards questions of an older format–which don’t guide students through the steps to the solution. “Most of these students know a wealth of equations with which to solve problems,” he explained, “but I would hope that at the end of camp they would not only be better problem solvers, understanding the importance of symmetries and approximations, but that they would be able to think like physicists–like the best physicists.”

The United States has competed among 90 nations in the Physics Olympiad since 1986, earning 46 gold medals, 33 silver medals, 29 bronze medals, and 11 honorable mentions. Since its inception, the American Association of Physics teachers (AAPT) and the University of Maryland have trained the US team, sponsored by APS and the American Institute of Physics (AIP), along with more than a dozen other organizations.