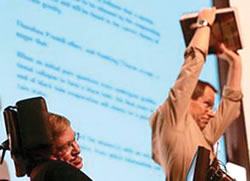 In 1684, Christopher Wren announced a wager of sorts: he promised a book worth 40 shillings to the first person able to demonstrate that Kepler’s laws could be derived from the inverse-square law. Three years later, Isaac Newton’s Principia was published, in which he addressed that challenge, but it proved too late to collect on the bet. Still, it is one of the earliest recorded scientific wagers–and modern-day physicists seem to be especially fond of making them.

For instance, Richard Feynman wagered in 1959 that it wasn’t possible to build a motor smaller than 1/64th of an inch. He hoped this would provide incentive for an enterprising scientist to invent new fabrication techniques. Instead, a man named Bill McLellan managed to build such a motor using existing techniques and parts drawn from amateur radios. Feynman could have refused to pay on a technicality –he never really made a formal wager–but he paid McLellan the promised $1000 anyway, despite expressing disappointment that his ulterior goal hadn’t been met.

One of the most recognizable physicists today is Cambridge University’s Stephen Hawking, author of the bestselling A Brief History of Time, among other books. In 1993, he made a cameo appearance in an episode of Star Trek: The Next Generation, in which Lieutenant Commander Data plays a game of poker with holographic representations of Hawking, Sir Isaac Newton, and Albert Einstein. Hawking “won” that fictional game, but in the real world, he has fared less well on the gambling front.

Hawking has made several high-profile scientific wagers over the years. In 1975, he bet Caltech physicist Kip Thorne that black holes–then still hypothetical objects–did not exist. The monetary stakes were fairly low: if Hawking won, he would receive a four-year subscription to Private Eye magazine; if Thorne proved right, and black holes did exist, he would receive a one-year subscription to Penthouse. As evidence for the existence of black holes piled up, Hawking was forced to concede the bet and supplied the promised subscription. But since so much of his own research postulated that black holes exist, scientifically he emerged a winner.

The second bet Hawking made, on September 24, 1991, was with Thorne and his fellow Caltech physicist John Preskill. It concerned whether naked singularities could exist outside a black hole, and hence be observed. Preskill and Thorne championed the possibility, while Hawking opposed it. Nearly six years later, Hawking conceded the bet, albeit on a technicality: He decided that it was possible for naked singularities to form under so-called “generic conditions.”

Around the same time, the three men agreed to another bet, this one centered on the question of whether information behind the event horizon of a black hole is irretrievably lost, or whether it is possible to recover that information from the radiation emitted by the black hole as it evaporates. Or, as the formal wager phrased it: “When an initial pure quantum state undergoes gravitational collapse to form a black hole, the final state at the end of black hole evaporation will always be a pure quantum state.”

This time, Hawking and Thorne championed the view that information is destroyed, arguing that the radiation from the black hole would be scrambled, so when it finally evaporated completely, any information about its contents would be lost. As Hawking put it, “Not only does God play dice, but he sometimes confuses us by throwing them where they can’t be seen.” Preskill bet that the information could be recovered in principle, and when physicists finally devise a theory of quantum gravity, we will understand the mechanism behind how this could occur.

Indeed, subsequent work by Gerard ‘t Hooft, Leonard Susskind, Juan Maldacena and several other string theorists suggested “that information is encoded in black hole spacetimes in a very subtle way,” Preskill recalled. Specifically, they introduced the concept of a holographic universe, in which any three-dimensional (3D) region of our universe can be described by information encoded on its two-dimensional (2D) boundary.

Those arguments apparently helped sway Hawking’s stance. On July 21, 2004, he gave a talk at a conference in Dublin, Ireland, in which he announced that he was conceding the bet. After concluding his talk, Hawking presented Preskill with the eighth edition of Total Baseball: the Ultimate Baseball Encyclopedia, “from which information can be retrieved at will.”

Thorne, however, stubbornly refused to concede, and perhaps he was right to do so. In 2012, a new paradox emerged, postulating that if information is indeed conserved, then another beloved postulate must be sacrificed, pertaining to what happens to an observer who falls into a black hole. Specifically, instead of experiencing nothing unusual as the infalling observer passed the event horizon, s/he would burn up in a wall of fire. The black hole firewall paradox remains contentious and unresolved, but Preskill, for one, is willing to consider that perhaps he was wrong after all.

Most recently, Hawking lost a $100 bet with the University of Michigan’s Gordon Kane that the Higgs boson would not be discovered at the Large Hadron Collider. CERN physicists announced evidence for a “Higgs-like particle” in July 2012. While Hawking acknowledged the importance of the discovery for physics, he admitted to BBC News, “It is a pity in a way because the great advances in physics have come from experiments that gave results we didn’t expect.”

So when it comes to scientific wagers, Hawking’s track record isn’t stellar. As Preskill quipped during an April 2013 tribute, “It’s sad to say that although Stephen Hawking is without doubt a great scientist, he’s a bad gambler.”