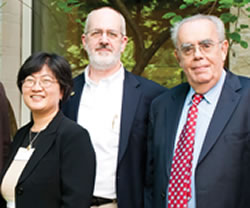 At this year’s conference, attended by about 100 chairs from both large research universities and smaller colleges, speakers shared innovative ways to recruit, educate and assess physics majors at their colleges and universities. In the opening plenary session, professors from schools across the country described how they adapted new technology and techniques into their programs.

Attracting prospective students into their physics program had been a major problem for James Madison University. In the mid 1990s enrollment reached a decades-long low, which the administrators attributed to a perception of limited career options for physics majors.

To boost their enrollment in the physics programs, they started offering more specialized tracks for their physics majors. Over the next decade, the department instituted a wide variety of new “multi-track” degrees. These included a new physics and engineering program, an option for students to design their own track, and a multidisciplinary concentration, which incorporated minors from other fields including education or English.

“This gives us a way to combine physics with other possible career choices,” Whisnant said. “Mostly it’s replacing existing courses. It’s how you sell it in the catalogue.”

Since 1995, when the department first started reorganizing itself, the number of physics majors has quadrupled while the overall number of students at the university hasn’t quite doubled.

Steven Pollock from the University of Colorado at Boulder described how his upper level students have successfully adopted a common technique often used in more basic courses. Over the last few years “clickers” have become very popular in large classes to get students to answer questions and immediately see how the whole class responded.

Pollock brought the clickers into several of his advanced junior and senior year classes. After taking surveys at the beginning and end of the school year, he found that clickers helped students in the advanced classes retain what they learned.

“We’re seeing evidence at Colorado that is consistent with the research that active engagement is working,” Pollock said.

New technologies are also being adopted for assessing what students have learned. Andy Rundquist from Hamline University pioneered a new evaluation technique that videotapes students explaining their work.

After a student solves a problem, he or she makes a video describing each step of the process. Rundquist then goes back and records his own video explaining any errors the student made.

“I don’t spend one minute longer grading now than I did before,” Rundquist said. He added that instead of grading papers “I’m just watching videos.”

Other plenary sessions at the conference dealt with trends in graduate education, including a description of the new APS Bridge Program, and with issues of “Department Climate.” The latter included an overview of the site visits conducted by the APS Committee on the Status of Women in Physics and given by Committee Chair Susan Blessing, and a discussion of “Ethics and the Welfare of the Physics Profession” by APS Executive Officer Kate Kirby.