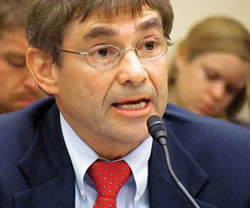 John Scofield testifies before a Congressional subcomittee in May 2012

Buildings are responsible for 39% of our nation’s energy consumption and associated green house gas (GHG) emission and they use 72% of the nation’s electricity [1]. It has long been established that cost-effective improvements in energy efficiency has great potential to reduce primary energy consumption and GHG emission associated with buildings. The American Physical Society first took up this topic in 1974 [2]. A more recent APS study confirmed the potential remains [1]. Despite forty years of building technology research and public policy efforts to promote energy efficiency the energy efficiency potential for buildings remains largely untapped.

The Environmental Protection Agency (EPA) began promoting building energy efficiency in 1993 as part of its ENERGY STAR (ES) program, introducing its ES building score in 1999. This score is based on measured energy consumption and is supposed to represent a building’s energy efficiency percentile ranking with respect to similar buildings in the U.S. commercial building stock. A score of 75, required for ES Certification, implies that the building uses less primary energy than 75% of similar buildings under similar operating conditions nationally.

In 2000 the US Green Building Council (USGBC) introduced its Leadership in Energy and Environmental Design (LEED) green building rating system. Unlike ES, LEED certification was not based on measured energy performance but rather on “points achieved” through a checklist of items included in the building design and/or design process–all intended to make the building “green” or more energy efficient. Four levels of certification are awarded depending on the total number of LEED points achieved–Certified, Silver, Gold, and Platinum.

LEED’s contribution was to marry the substance of energy efficiency with the popular appeal of green design. It was a brilliant marketing strategy and, since its introduction, LEED certification has far surpassed ES certification in popularity. Today nearly every large organization owns one or more LEED-certified buildings, and many institutions–particularly governmental–have mandated that all their future buildings must be LEED certified at the silver level or higher.

But do LEED-certified buildings actually save primary energy and reduce GHG emission? LEED certification has clearly captured the public’s fancy–not unlike organic farming or herbal medicines. But also like these fields there is a woeful lack of scientific data supporting LEED’s efficacy. And what little measured building energy consumption data there are have been gathered through a “self-selected” process that is clearly biased towards the “better-performing” buildings. In these data, proponents find evidence that LEED-certification is saving energy [3]. But careful analysis of even these biased data show that LEED-certified buildings, with regard to primary (or source) energy consumption and GHG emission, perform like other buildings–no better and no worse [4].

The vast majority of energy savings claims are not based on measured building energy performance but rather on design team projections. LEED points for energy savings are based on these design projections–providing incentive for the design team to produce optimistic energy projections and to construct an inefficient “baseline” model to which these are compared. Studies show there to be little correlation between design energy projections and subsequent measured energy performance (see [3] and references therein). These design projections demonstrate intent not accomplishment.

There are, however, a dozen or so published studies containing measured energy consumption data for LEED-certified buildings. These collectively provide energy data for, at most, 229 buildings–roughly 3% of the 8,309 LEED buildings certified before 2012. Only four of these studies appear in peer-reviewed venues (two of these written by me–the rest are reports written by or paid for by the USGBC or organizations closely aligned with it. Buildings included in these studies are unlikely to be representative of the larger population. Building owners control access to their energy data. Nature–galaxies, rocks, atoms–doesn’t care what humans learn from their experiments. Buildings do–or rather, their owners and design teams do–they have a vested interest in controlling energy data for the building for which they have already enjoyed extensive green publicity. Owners are unlikely to voluntarily disclose embarrassing energy consumption data. In a many cases requisite meters are not even installed–rendering the question moot.

The largest and most-widely publicized of these studies, conducted by the New Buildings Institute (NBI) in 2008 for the USGBC, concluded that “...average LEED energy use [is] 25-30% better than the national average” [3]. But the APS Energy Efficiency Study Committee concluded that the LEED buildings in the NBI study used more energy per square foot than the average for all existing commercial buildings [1]. NBI’s conclusion–similar to those published by other studies, is obtained by 1) a mathematical error in calculating the gross energy intensity for the LEED buildings, and 2) focusing on site energy–energy used at the buildings, while ignoring off-site energy losses associated with electric generation and distribution.

First consider the mathematical error. A building’s energy use intensity (EUI) is the ratio of its annual energy use to its gross square footage (gsf) or total floor area (surrogate for building volume). EUI is convenient for comparing the energy use of two similar buildings differing only in size.  The Energy Information Agency (EIA) similarly defines the gross energy intensity of a set of N buildings to be their total energy divided by their total gsf–mathematically equivalent to the gsf-weighted mean EUI of the N buildings. The EIA’s Commercial Building Energy Consumption Survey uses this metric to characterize the energy use of subsets of the national commercial building stock [5]. In the NBI study–indeed, in most LEED building studies–energy used by LEED sets of buildings are characterized by summing their individual EUI and dividing N. This unweighted or “building-weighted” EUI is unrelated to the total energy used by the buildings. When this error is corrected we find the LEED buildings in the NBI study use 10-15% less energy on site as compared with other buildings [4].

But energy used on site–called site energy–is only part of the story. Site energy fails to account for the off-site losses incurred in producing the energy and delivering it to the building–particularly important for electric energy that, on average, is generated and distributed with 31% efficiency [1]. The EPA defines source energy to account for both on- and off-site energy consumption associated with a building; building ES scores are based on source energy consumption. When you compare the source energy consumed by the LEED buildings in the NBI data set with that of comparable non-LEED buildings you find no difference–within the margin of error [4].

How do we understand these results? First, LEED-certified buildings, similar to other new or renovated buildings, are showing a modest reduction in energy used on site. But these buildings are relying more on electric energy–and the off-site losses in the electric power sector are offsetting any savings in site energy.

The other issue is that larger buildings tend to have higher EUI than smaller buildings. This may seem counter-intuitive since energy use in simple buildings (like houses) is dominated by surface losses/gains (windows, insulation, etc.). But energy use in large commercial buildings is driven by internal loads–equipment, people, and lighting. Large office buildings are typically air-conditioned year-round. This is seen nationally as well as in LEED-certified buildings. Roughly 5% of the nation’s commercial buildings account for half of the gsf of the building stock–and an even larger fraction of primary energy consumption.

In recognition of the need for actual performance data the USGBC has required all buildings certified under its 2009 version of LEED to measure and report annual energy consumption data to the USGBC for five years following certification. And, for its Existing Buildings program–which targets renovated buildings–the USGBC has adopted the ES building rating system as its method for determining energy efficiency points–for the first time rewarding measured energy performance.

But these changes have not yielded convincing scientific data that demonstrate energy savings for LEED. More than 2,400 buildings have been certified under LEED 2009–with 711 of these certified before 2012. Yet the USGBC has released no scientific report analyzing the energy data they have collected. Instead they “cherry-pick” the data to create clever marketing sound bites that have no scientific value. A USGBC press release last November claimed their data reveals that 195 LEED certified buildings received ES scores averaging 89–demonstrating a 43% energy savings [6]. So what–presumably a million (of the 5 million) buildings in the commercial building stock have an “average” ES score of 89. Scientists should not be impressed. Moreover, while the source energy savings of a single building may be inferred from its ES score, it is mathematically impossible to determine the energy savings for a collection of buildings from their average ES score (unless they all are identical in size and function)–hence the claim of 43% energy savings is unjustified.

These days the USGBC points to the high ES scores of its Existing Buildings program as evidence of energy savings for this program. But the “value added” by LEED-certification is not established by comparing the certified building’s ES score to 50–the presumed mean for all US buildings–it is found by comparing its ES score to those of similar, newly-renovated buildings that did not use the LEED process. Any newly-renovated commercial building (LEED certified or otherwise) ought to see reduced energy consumption owing to cost-effective efficiency upgrades in lighting and heating, ventilation, and air-conditioning equipment. Moreover, many of the buildings certified under the LEED Existing Buildings program have previously been certified by ES with scores significantly higher than 50.

At present there simply is no justification for governments mandating LEED building certification–using public dollars to subsidize a private enterprise with no scientific data to demonstrate efficacy in lowering primary energy consumption or GHG emission. The problem is that LEED does not require public disclosure of energy consumption data and it does not have a mandatory energy performance requirement. LEED certification clearly delivers green publicity but there is no evidence for primary energy savings, except possibly at the highest levels of certification (Gold and Platinum). The USGBC could implement changes that would result in substantive savings–but this might negatively affect “sales of their product.” We need to stop awarding buildings green publicity at the front end of a project and, instead, save the accolades for demonstrated reduction in GHG emission and primary energy use.

John Scofield is a professor of physics at Oberlin College. He has served on the APS Panel on Public Affairs and provided congressional testimony on the topic of green buildings.