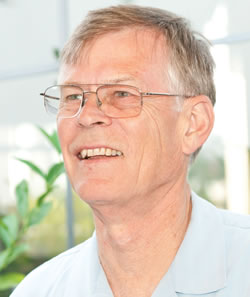 Last year, 2012, saw a global celebration in July with the discovery of the Higgs. In October we celebrated the Nobel Prize for research in quantum physics. We are now seeing a continued increase in the number of students enrolling in physics in high school and in colleges. It is a great time to be a physicist!

The American Physical Society was founded in 1899 when 36 physicists gathered at Columbia University for that purpose. They proclaimed the mission of the new society to be “to advance and diffuse the knowledge of physics.” In one way or another, APS has been doing that task ever since.

As the premier membership society for 50,000 physicists, the APS is in very good stead in its core areas of publishing, meetings, membership growth and finances. We have exceptional programs in outreach, education, international affairs, and government relations and advocacy. However, in moving forward we should continue to strengthen our organization and to respond to new opportunities.

In 2011 we initiated a strategic planning process to help define goals and objectives for the APS over the next five years. The elements of the plan were developed jointly with APS staff and members of the APS Executive Board, and communicated to the APS membership in May 2012. The Strategic Plan is available on the APS website.

The Strategic Plan for 2013 to 2017 provides a roadmap for ensuring that APS will continue to be:
I call the Strategic Plan the three-plus-one plan, with three outward-facing goals and the fourth goal looking inward to increase organizational excellence.

Implementation of the Strategic Plan will be guided by recommendations of various Task Forces of APS members. A Development Task Force, led by President-Elect Mac Beasley, was created early in the process because fund-raising is essential to fulfilling many of the Strategic Plan goals. We also established an Early Career Task Force to advise APS on how best to support and engage this important and rapidly growing segment of our membership. A significant challenge for APS publishing is to maintain our excellence while meeting the goal of public access to research supported by federal funds. A Task Force on Open Access is working to communicate with policy makers on these issues.

In the process of being formed is a Task Force on the April Meeting with the goal of ensuring that our meetings are must-attend events. Of course we can make progress in some areas without a formal task force. For example, we re-organized the unit convocation, now called the APS Leadership Convocation, and used the event to enhance communication between unit leadership and APS governance. This article is based on the President’s Report presented at the Leadership Convocation held at APS Headquarters in February 2013 in conjunction with a day on Capitol Hill.

APS is in good financial health with revenue and expenses nearly balanced at $46.9M. Most of our revenue stems from publications. Our publications are growing, and submissions keep increasing, necessitating a larger editorial operation. We are adding 18,000 sq. ft. of new space and refurbishing old space at the Editorial Offices on Long Island.  Further, we initiated a high impact factor, open access, on-line journal Physical Review X. We have a very strong reviewer base and strong support for our journals from our members. In particular, more than two thirds of our authors are from outside of North America. More than half of our reviewers are overseas. We are completing the transition to an all-electronic set of journals with less than 15% of our journals delivered as printed copy. APS members have been extremely well served by APS journals for one hundred years. I urge you to support your journals through volunteer service and through papers submitted for publication.

APS Scientific meetings are critical to the communication of physics. The March 2012 meeting held in Boston had nearly 10,000 attendees. The scientific program included more than 100 invited sessions and 550 contributed sessions of which approximately 7000 papers were presented. The April 2012 Meeting held in Atlanta celebrated 100 years of Cosmic Ray Physics and had three special plenary sessions that complimented 75 invited and 100 contributed sessions. In addition, our Divisions held their annual meetings in Plasma Physics, Fluid Dynamics, Particles and Fields, Nuclear Physics, AMO Physics and Laser Science.

Starting with the 2011 April Meeting in Anaheim, APS began posting invited talks online. The idea originated in the Committee on International Affairs and was supported by then-APS-president Barry Barish. The experiment has been a resounding success. A survey following the 2011 April Meeting found that 97% of the respondents would find online talks useful and 95% believed that online APS presentations would enhance research or professional development of students and postdoctoral scholars.

The APS Prizes and Awards, about fifty in number, recognize outstanding achievements in research, education and public service. In addition, APS Fellows achieve the honor of being recognized by peers as having achieved distinction in physics. APS has now increased the visibility of the prizes and awards with a number of new features at the special sessions at the March and April meetings, and is taking additional steps to enhance the public recognition of these prizes and awards.

Communications is critical to the APS because of its global reach. We have continued to hold a series of Fellows meetings around the country during the past year and later this year we are headed to London to meet with and discuss APS issues with APS Fellows in the UK. In 2012 the Fellows meetings were held in Atlanta, Chapel Hill, Chicago and Northern California. The latter meeting involved fellows from UC Berkeley, Stanford, SLAC and LLNL. The meeting was hosted by LLNL and included a tour of the NIF Laser facility.

The APS has a longstanding program to recognize Historical Sites in Physics. Recent sites recognized were at Brookhaven, Dartmouth, University of Minnesota, Aspen Center for Physics, JILA, SLAC and the Carnegie Institution in Washington. It is a particularly pleasant responsibility of the President to attend these events and to recognize the impact each site has had on the history of physics.

The APS membership is representative of the international community. An element of the Strategic Plan is to increase the international engagement of the APS and to better serve international members. Last year witnessed trips by the APS President to Korea to celebrate the 60th anniversary of the Korean Physical Society, and in the late summer to Beijing to celebrate the 80th anniversary of the Chinese Physical Society (CPS), an event held at Tsinghua University. In September, the APS leadership visited China, Hong Kong and Taiwan to explore joint activities to engage with the international community. The CPS and the APS held their first joint scientific session at the CPS Annual Meeting held in Guangzhou, China. This trip was very successful with extended discussions with APS members held at six universities.

APS has a tradition of supporting public policy discussions where physics and science matter. APS works through its Office of Public Affairs in Washington to accomplish two tasks: to inform the public debate through the Panel on Public Affairs (POPA) and to advocate on issues that affect the physics community through the Physics Policy Committee (PPC). APS develops reports through POPA that often lead to legislation. Recent examples, available on the APS website, include Technical Steps to Support Nuclear Downsizing (2010), Integrating Renewable Electricity on the Grid (2010), and Energy Critical Elements: Securing Materials for Critical Technologies (2011). APS members also participate in Congressional Visits Day to inform representatives about issues critical to science and the health of the nation.

APS is active in its broader roles in physics education and in public outreach. The need for high school science teachers, especially those in physics and chemistry, is now well documented. The APS-led program PhysTEC has the goal to increase the number of highly qualified high school physics teachers. The PhysTEC program, supported by the NSF, has been particularly successful in establishing sites for training more physics teachers. This effort is particularly important in view of the growing number of high school students taking physics courses, a trend that is now also apparent at universities where Physics Department Chairs are scrambling to find additional space and resources to accommodate increasing enrollment in physics courses.

Our broader outreach to the public takes many forms.  Two are gaining significant attention. We now have a physics heroine “Spectra” in a Comic Book. Spectra is a “laser superhero” who uses her powers to educate middle-school girls and boys about the wonders of physics. The second, “Science off the Sphere”, is a series of videos in which astronaut Dr. Don Pettit does physics demos in microgravity on the International Space Station. Access to these programs is available at the PhysicsCentral website that saw almost three million page views in 2012, nearly double those of the year before.

It has been my privilege to serve the APS as a member of the Presidential Line and as President in 2012. Face-to-face meetings with APS unit leaders, committee chairs, fellows and members have confirmed that the core strength of the APS lies in its members and volunteer leaders. With your support, the APS is moving forward.

Robert L. Byer is the William R. Kenan, Jr. Professor of Applied Physics at Stanford, and Co-Director of the Stanford Photonics Research Center. He served as APS President in 2012.