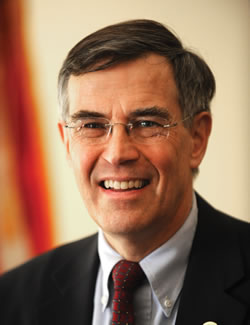 
The newly formed Mid-Atlantic Section of the APS got a big boost when physicist and Congressman Rush Holt (D-NJ) joined its ranks. In a letter he wrote to the section (text here), Holt congratulated its founding members and emphasized the dual role that scientists have to advance knowledge and weigh in on important national issues.

The section’s past-Chair, Charles Clark of NIST, first reached out to Holt’s office during the 2012 campaign. At the time, Holt was the only PhD physicist serving in Congress.

“To get him to join this newly founded section is a very great thing for us,” Clark said. “On the national scene, he’s probably one of the best known physicists in the country.” Clark added that he was excited that the letter came in time to be included in the section’s first newsletter.

“I thought it would be a very great thing for the APS as a whole to hear, reiterated by a person of his stature, the value that he thinks our Society offers society at large,” Clark said.

Holt represents central New Jersey. Before winning office, he was Assistant Director of the Princeton Plasma Physics Laboratory and a professor of physics at Swarthmore College before that. He is a Fellow of APS.

Holt used several sections in the letter in recent testimony before a subcommittee of the House Committee on Oversight and Government Reform. His presentation to the Subcommittee on Federal Work Force, U.S. Postal Service and the Census highlighted how important it is for scientists to travel to conferences and expressed his opposition to new restrictions on travel for federal workers.

The Mid-Atlantic Section incorporates physicists who live or work in Delaware, Maryland, New Jersey, Pennsylvania, Washington DC, and West Virginia. It officially formed in the fall of 2012 and is planning to hold its first elections later in 2013 and its first meeting at Penn State in 2014. The section’s organizers also held a reception at the APS March Meeting in Baltimore as a way to attract more local members.