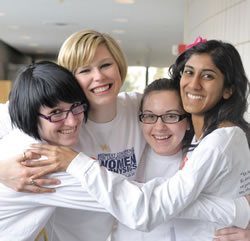 
To organize the most successful annual Conference for Undergraduate Women in Physics, the plan was to divide and conquer, explained Shannon Glavin.

Glavin, a physics major at the University of Illinois Urbana-Champaign, was one of four undergraduate students who led the organizing committee for this year’s Conference for Undergraduate Women in Physics at UIUC. Glavin said that key to their success in orchestrating over two hundred students, thirty volunteers, and twenty-five speakers was delegating responsibilities among four college students and three faculty advisers—and seeing every responsibility through.

Now in its eighth year, the 2013 Conference for Undergraduate Women in Physics brought together almost nine hundred undergraduate students at six host universities across the country. This year’s six universities were California Institute of Technology (198 attendees), Colorado School of Mines (129), Cornell University (135), University of Central Florida (87), University of Illinois in Urbana-Champaign (235), and University of Texas at Austin (88). The Conference aims to provide women in physics the resources, mentorship, opportunities for networking, and motivation to pursue graduate work and careers related to physics. While maintaining these founding principles, each host site assumed complete responsibility for the conference planning.

As in years past, the independence of the local conference sites produced a diverse and vibrant conference weekend.

At the University of Central Florida, co-coordinators Asma Amjad and Tracy Becker organized a Science Café where eight physicists spoke about their research with small groups of attendees. In tandem with the larger talks, workshops on graduate schools, CV writing, and a poster presentation of student research, the Science Café provided a “very interactive environment in which the speakers could talk about their research and also about their lives,” said Becker.

Glavin and her co-organizers at UIUC shared this goal: “There are very strong male science role models,” she said, noting scientists like Carl Sagan and Bill Nye. “These conferences are a great way to share female role models as well.” Glavin hoped that students would return to their home universities with a greater sense of their part in the network of women in physics.

This vision was realized when Maggie Xiao received an email from a professor of materials science she had met at the Cornell conference. “About a week after the conference, a professor from materials science wrote me an email with literature she recommended I pursue for further studies,” said Xiao, a sophomore at Bryn Mawr College. “She had some insights that we didn’t even think about in my own lab.”

The conference, Xiao noted, also gave her a great opportunity to learn to collaborate and reach out to students and faculty at schools across the country. Xiao has since reached out to faculty at Bryn Mawr and at the University of Pennsylvania for more research opportunities. “The conference solidified my determination to pursue graduate work in physics,” she said.

Also emphasized in this year’s conferences were careers in industry or in fields related to physics. At UIUC and the Colorado School of Mines, the organizers included a career panel that had physicists who were almost exclusively in industry. Every student has role models in academia from classes, noted Glavin, but undergraduates get much less exposure to careers in industry. The University of Central Florida held a well-attended industry fair, and after the industry career panel at the Cornell conference, Xiao said that she “was able to see the applications of physics knowledge to a wide range of industries.”


“You always hear that you can do anything with a physics degree,” noted Glavin, “but it was really interesting to meet people who actually do.”

This year, the Colorado School of Mines hosted the conference keynote address by University of Colorado Boulder physicist Margaret Murnane. The keynote was webcast to the other five sites, offering an opportunity for conference attendees across the country to realize their common experience. While many of the conferences included student presentations, faculty talks, and graduate and career workshops, the decisions of the local organizing committees made each host conference unique.

For example, the Mines conference had a 22 percent male attendance. Mines organizer Nicole Johnson explained that the organizing committee at Mines had attended the 2012 conference hosted at Stanford University and had noticed that there weren’t any men. “Mines is 75 percent male across campus,” said Johnson, “and we thought that all of the lessons at Stanford were completely applicable to men too.”

Johnson and her peers used blind admissions and an application that promoted a diverse and engaged conference attendance at Mines. Applicants wrote a personal statement of their goals for attending the conference. “We wanted to look for people who really understood the mission of the conference and we were looking for applicants to speak a bit about diversity in physics and across the sciences,” said Johnson. “One of the most interesting things we noted,” she said, “is that some of the best essays on diversity were written by men.”

A physics and mechanical engineering double major at Colorado State University, Forrest Craft says he applied to attend the conference at Mines to learn how he could help increase the diversity in physics. “I thought that one of the main goals of the conference was to put people together with different viewpoints–I think that that is very necessary for science,” Craft said. “For example, the question and answer session was awesome,” he said, “having both men and women made for some really interesting discussions and I met some really great people.”

As reported in last month’s APS News, this year for the first time the Conference received sponsorship, and administrative support, from APS.