The 2nd Graduate Education in Physics Conference, held January 31-February 2 at the American Center for Physics in College Park, generated in-depth discussion on topics such as preparing graduate students for non-academic careers, improving on diversity, and debating graduate school admissions policies, including use of the GRE.

The conference, organized by APS and the American Association of Physics Teachers (AAPT), followed on the success of the first such conference, held in 2008. 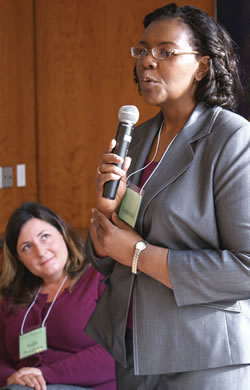 At the session on "Promoting Diversity in Physics", Kathy Prestridge (left) of Los Alamos listens while Zelda Gills of Lockheed-Martin makes a point.


One hundred seven participants represented 74 universities, including PhD-granting physics departments across the United States, both large and small. Department chairs and directors of graduate studies attended, as did graduate students and members of the physics community from industry, funding agencies, and professional societies.

A session on “Building Successful Graduates” discussed the GRE as an admissions tool. Frances Hellman, UC Berkeley, presented data that suggests that there is almost no correlation between GRE scores and future success as a researcher. Diehl said that one of the messages to drive home was that not everyone can be measured in the same way, especially by the GRE. “If we want to increase the diversity of physicists, we need to find ways to tap into and build on the strengths of individuals,” she commented. (See the Back Page article on the GRE in last month’s APS News, http://www.aps.org/publications/apsnews/201302/backpage.cfm).

Meg Urry, chair of the physics department at Yale University, started the conference with a plenary on “Some Thoughts on the Future of Graduate Education.” Cherry Murray, Dean of Engineering and Applied Science at Harvard University and 2009 APS President, gave a keynote address titled “Reflections on Getting a PhD in Physics.” Murray presented data on PhD enrollments and employment.

A significant conference focus was the importance of educating students for a wide variety of careers, given that a small percentage of PhDs in physics find permanent employment within academia. A panel on non-academic careers agreed that interdisciplinary experiences and resume-writing skills are important for graduate students to master. Stefan Zollner, physics department chair at New Mexico State University, said the fact that only 20% of PhDs go on to become permanent faculty must be communicated to students. He urged institutions to stay in touch with alumni, find out what skills they find useful, and invite non-academic graduates back to give colloquia.

Increasing the diversity of the graduate student population was a major discussion topic during the conference. Anthony Johnson, Director of the Center for Advanced Studies in Photonics Research and Professor of Physics, Computer Science and Electrical Engineering at the University of Maryland Baltimore County, gave a plenary talk on his personal perspective on promoting diversity in physics. Johnson described research fellowships and programs available to underrepresented minority students since 1972 and shared his own observations from his experience at AT&T Bell Laboratories.

The discussion on diversity also included an afternoon breakout session on Bridge Programs to Improve Diversity. Bridge programs are typically one- to two-year post-baccalaureate or master’s programs that seek to enhance student’s chances of success in a PhD program. These programs offer a combination of coursework, research experience, and mentoring to strengthen applications to graduate school in physics. Theodore Hodapp, APS, and Marcel Agüeros, Columbia University, gave presentations on their respective bridge programs. The APS Bridge Program seeks to increase the number of underrepresented minorities, including African Americans, Hispanic Americans, and Native Americans, who receive PhDs in physics.

Sessions at the conference also emphasized the fact that employers need PhDs who can work well with others. Panelist Kathy Prestridge, Los Alamos National Laboratory, said she could not hire people who would not work in teams. Roel Snieder, Colorado School of Mines, led the session General Professional Skills, Leadership, Team Building and Communication, where the participants concluded that such “soft skills” are critical for success in many physics jobs today.

A session on University, Industry and National Lab Partnership for Graduate Education mentioned that awareness of national lab programs needs to increase. The session also encouraged candidates to form personal connections with PIs.

Christopher Salvo, a graduate student at University of California, Riverside, found the conference as a whole extremely valuable, but especially enjoyed the series of breakout sessions. “This mechanism allowed for many topics to be covered in a highly intense and focused manner,” he said, citing sessions on non-academic careers as most useful.

Chandralekha Singh, a conference organizer and Professor of Physics at the University of Pittsburgh, said the conference was very successful in achieving its goals. She said the most valuable part of the conference was the “great exchange of ideas on how to maintain excellence in graduate education in physics.” This includes keeping in mind changing demographics and increased competition for the best graduate students.

Lawrence Woolf, a conference organizer from General Atomics, drew attention to another take-away message from the conference: graduate students need improved communication with their thesis advisors regarding progress towards their PhD. This might include setting up a mutual understanding between students and their advisors, reviewing this understanding annually, and assigning mentors independent of thesis advisors.

Several organizers said they would like to see the conference occur more than once every five years so that there is enough time to have detailed discussions on issues related to graduate education in physics.

The conference was supported by a grant from the National Science Foundation and organized by Renee Diehl, Theodore Hodapp, Chandralekha Singh, Michael Thoennessen, R. Steve Turley, and Lawrence Woolf. The organizing committee anticipates issuing a conference report in 2013.