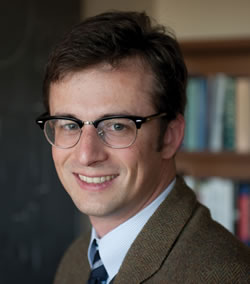 The untold riches of a career on Wall Street have loomed large in the physics community these last few decades. Most physicists know someone–a friend from graduate school; a former student–who left academia to pursue a career in finance. And we have heard quite a bit, too, about the damage wrought by the so-called “quants” that these physicists morph into when they take investment jobs. Quants, along with the mathematical models and algorithmic trading strategies they helped to develop, have been blamed for three decades of market crashes, from the 1987 Black Monday crash, to the 1998 crisis at Long-Term Capital Management, to the 2007-08 worldwide financial collapse.

Many commentators have argued that these crashes and crises reveal the hubris of physicists on Wall Street. They are outsiders convinced they are smarter than everyone else, using models that are doomed to fail. After all, markets rise and fall on the whims of human beings. People are not as predictable as quarks or pulleys. It was Isaac Newton himself who, after losing his shirt in the South Sea Bubble, allegedly fretted “I can calculate the motions of the heavenly bodies, but not the madness of men.” What could methods developed to understand inclined planes ever tell us about something so complex as the economy?

Quite a bit, as it turns out. Wall Street became a viable option for physics PhDs during the mid-to-late 1970s, and they arrived en masse during the 1980s. But physicists have played a significant and influential role in the development of economics and financial theory since the beginning of the twentieth century, and even before.

For instance, Jan Tinbergen, co-recipient of the first Nobel Memorial Prize in Economic Science, was trained as a physicist under Paul Ehrenfest. Irving Fisher, perhaps the first great American economist, was a doctoral student of J. Willard Gibbs, the pioneering statistical mechanist. Paul Samuelson, winner of the second Nobel and the first American to receive the prize, was also a descendent of Gibbs, trained by Gibbs’ protege Edmund Bidwell Wilson. In his wildly influential book, Foundations of Economic Analysis, published in 1947, Samuelson explicitly acknowledged his Gibbsian roots, developing a mathematical theory of economic equilibrium with significant debts to thermodynamics.

Much of modern economic theory rests on the foundations laid by these physicists. And surely economics has provided some insight into the workings of the economy.  So if you want to reject the idea that physicists have anything important to contribute to understanding markets, you need to dismiss far more than the quant models behind high-frequency trading. This sort of engagement by physicists with core economic questions continues under the guise of “econophysics”. Nowadays most economists take econophysicists to be heterodox, but their work is part of a long tradition that is tightly entwined with mainstream economic theory.

Still, Wall Street quants are not econophysicists in the sense of Tinbergen, Fisher, or Samuelson–or contemporary researchers such as H. Eugene Stanley, Joseph McCauley, or Eric Weinstein. Very few quants are trying to develop economic theory. Instead, the physicists on Wall Street are closer to the markets. They are trying to develop predictive algorithms that can drive investment strategies, or to identify and control the risk associated with an investment portfolio, or construct models relating the prices of some financial products to others–and especially, models for pricing financial products known as “derivatives”, which are securities that are built out of more traditional products such as stocks or commodities.

It is these projects that strike many–even many physicists–as implausible. Physicists are good at predicting the outcomes to experiments. But predicting markets? It seems like a different business altogether–one where physics is of little help.

Until you delve deeper, that is, and look at just how physicists have contributed to financial modeling and investment practice. Because in addition to their contributions at the birth of modern mathematical economics, physicists have been responsible for several major developments in finance. And at least some physicists have been phenomenally successful as fund managers. Indeed, the fund that is widely viewed as the most successful hedge fund of all time, the Medallion Fund, was run for twenty years by mathematical physicist James Simons–the same James Simons who lent his name to Chern-Simons theory, which has been studied extensively by string theorists. Simons’ firm only hires people with backgrounds in fields like physics, mathematics, and computer science–and not economics or financial engineering.

The reason physicists are especially good, or at least can be especially good, at financial modeling is not that markets are somehow subject to physical laws. Nor is it that physicists have developed some detailed theory of investor behavior. The connection is at a higher level than that. Physicists have a distinctive way of thinking about mathematical problems. They are experts in approximative thinking, in building toy models and effective theories. This sort of reasoning is just what is needed to take a problem that appears hopelessly complex and find the simplifying assumptions and idealizations necessary to make it tractable. And it is for this reason that physicists have made, and can continue to make, significant contributions to finance. In fact, if Wall Street banks want to use mathematical models more effectively, they would do well to learn to think of models the way physicists do.

To take a concrete example, consider a model for pricing options. Options are a class of derivative contract that give the bearer the right to buy (or sometimes sell) some underlying security–a stock say, or a commodity like grain–at some fixed time in the future, at a pre-determined price called the “strike price.” The million dollar question facing an options pricing model is this: how much should you be willing to pay now for the right to buy or sell something in the future, at a price you decide today The standard model for pricing options is known as the Black-Scholes-Merton model, for three economists who developed it in the early 1970s But in fact, the model had essentially been discovered twice before, both times by mathematical physicists–though the physicists’ route to the model was different from the economists.’

The first of these physicists was a Frenchman named Louis Bachelier, whose dissertation, written in 1900 under the guidance of Henri Poincare, presented a “Theory of Speculation” on the French stock market. The second was an American named Edward Thorp, who independently discovered a slightly modified version of the formula around 1964, and then went on to start the first modern quantitative hedge fund. There is little evidence that Bachelier ever traded on the basis of his research, but Thorp certainly did–and with considerable success. (Thorp’s trading strategy was based in part on the work of yet another physicist, named John Kelly, who applied information theory to the question of how one should bet when receiving unreliable, but relevant, information. Thorp learned of Kelly’s work from Claude Shannon, with whom Thorp successfully built a computer to beat roulette!)

From this point of view, a “fair” price for an option is precisely the premium at which the expected value of the bet is zero. (I am glossing over a subtlety here regarding the value of money over time.) This observation allows one to write down an equation with the fair premium as an unknown quantity, for which you can then solve–so long as you know the probability distribution governing the price of the stock at the future time.

But how can one ever know what the probability is that a stock will take a certain price in the future? Answering this was the second piece in the puzzle. As a first approximation, one might just assume that markets undergo some sort of stochastic process. Here Thorp built on ideas developed by a physicist named M.F.M. Osborne, who in a 1959 paper called “Brownian Motion in the Stock Market” showed that under reasonably generic assumptions one should expect the returns on a stock to follow a random walk. This suggests returns should be normally distributed with variance proportional to the square root of time, and that prices should be log-normally distributed. (Bachelier developed a similar thesis, that prices, not returns, should undergo a random walk. This is mistaken because it implies that prices have a non-zero chance of falling below zero.)

Putting these two pieces together gives a solution to the problem. But it bears reflecting on what this solution looks like. For one, it does not depend on a “theory” of investors or of markets. It is much more modest than that: it is a limited solution to a particular problem. More importantly, it rests on some strong simplifying assumptions–most significant of which is that returns follow a stationary stochastic process.

Of course, it is possible to test this assumption. Indeed, Osborne did test it, and found some evidence to support it–though other researchers, most notably Benoît Mandelbrot, later argued that analysis of historical returns shows that this assumption is flawed, and that returns actually exhibit excess kurtosis (fat tails). This distinction is extremely important, but it should be kept in perspective. Thorp and Bachelier developed a rough and ready model that, to first order–i.e., neglecting tail effects–provided an entirely novel, clearly useful solution to an investment problem. And at least Thorp was aware of the limitations of the model, in the sense that he understood when the model could be expected to fail (in the presence of tail effects), and what would happen when it did.

This last point is crucially important. Lots of fields use mathematical models to understand the world. But physicists have a particular way of thinking about approximation and idealization. To make progress on interesting problems, physicists always have to make assumptions and approximations. They work with the zero temperature limit, or the thermodynamic limit, or the mean field approximation.  They are trained to think these approximations through–to justify their assumptions with physical arguments. Most importantly, physicists are taught how to think about what happens when their assumptions fail. They are taught to calculate, or at least estimate, the second order corrections to their first order equations.

This cautious, assumption-focused reasoning is what guided Thorp during the 1970s and 1980s when he used the options model as the basis for a trading strategy at his hedge fund, Princeton-Newport Partners. He, and a handful of others, understood that the pricing model that Black, Scholes, and Merton introduced–and everyone in finance used–was not a Final Theory of options. It was at best an effective theory, an approximate model whose higher order corrections could come to dominate in certain market regimes. And in October 1987, when the Black Monday stock market crash hit, many options traders were wiped out. But not the ones who thought like physicists.

James Owen Weatherall is Assistant Professor of Logic and Philosophy of Science at the University of California, Irvine, and author of the book The Physics of Wall Street.