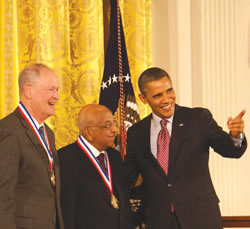 President Obama congratulates James Wynne and Rangaswamy Srinivasan who were honored, together with their late colleague Samuel Blum, for the invention of excimer laser surgery, the technique that makes LASIK surgery possible.

“Success depends on the ideas that you can dream up, the possibilities that you envision, and the hard work, the blood, sweat and tears you’re willing to put in to make them real,” President Obama said at the ceremony at the White House honoring the recipients. “[T]oday, it’s clearer than ever that our future as a nation depends on keeping that spirit of curiosity and innovation alive in our time. So these honorees are at the forefront of that mission.”

James Wynne and Rangaswamy Srinivasan, both at IBM, were honored with the National Medal of Technology and Innovation for experimenting on the effects of lasers on biological tissue, laying the groundwork for Lasik eye surgery. Their team started by shooting pieces of their own fingernails and hair with an excimer laser and found it made very precise cuts.

“If the laser made a really clean incision in your skin, without any collateral damage, it would heal without scarring,” Wynne said. The day after Thanksgiving 1981, the team tried slicing up small pieces of leftover turkey skin.  “When I put this sample under a microscope, I had my ‘aha’ moment.”

He added they didn’t immediately think of using it for eye surgery.

“I thought it was going to revolutionize brain surgery, and I thought it might revolutionize skin surgery,” Wynne said. Instead, it revolutionized eye surgery. Srinivasan, Steven Trokel and Bodil Braren were the first to publish a paper about using Wynne's laser discovery on a human eye. “Once that paper was published, the whole ophthalmology community heard about it, and then it was off to the races.”

S. James Gates Jr. of the University of Maryland was awarded the National Medal of Science for developing the theory of supersymmetry, and for sharing theoretical physics with the public.

“When I was a graduate student at MIT I was the first person at the Institute who recognized the possible importance of supersymmetry,” Gates said. “Now 30 years later, supersymmetry is right at the center of the class of ideas as to how the universe functions and the standard model.”

Gates has also appeared on numerous popular TV shows about science, he is currently a member of the President’s Council of Advisors on Science and Technology, and he is serving on the Maryland state board of education.

John B. Goodenough at the University of Texas at Austin was awarded the National Medal of Science for his work on cathodes that lead to the invention of the lithium ion battery.

“It’s a nice surprise,” Goodenough said. “I’m very happy for the recognition that it gives to the particular field of electrochemistry.”

Longtime SLAC Deputy Director Sidney Drell received the National Medal of Science for “contributions to quantum field theory and quantum chromodynamics, application of science to inform national policies in security and intelligence, and distinguished contributions as an advisor to the United States Government.” Arthur Rosenfeld, Scientist Emeritus at Lawrence Berkeley National Lab, won the National Medal of Technology and Innovation for his work developing energy efficient building technologies and standards.