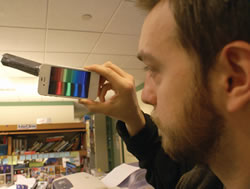 APS Public Outreach Specialist James Roche demonstrates SpectraSnapp in action. Using the simple spectrometer attached to his iPhone, he compares the spectrum from a fluorescent light (bottom) to the spectrum of neon from the library in the app, thus showing conclusively that the light in question is not produced by neon.

SpectraSnapp, a new app released by the APS outreach department, is now available free of charge on Apple’s iTunes store. It allows users to turn their iPhone or iPad into a spectroscopic device that can analyze common sources of light.

“SpectraSnapp is an app that APS developed that can break down any incoming light into its various wavelengths,” said James Roche, a public outreach specialist at APS who helped develop the app. “You can turn your iPhone into a personal spectroscope.”

The SpectraSnapp app comes with directions to build a simple spectrometer that fits over the phone’s camera. All that is required is a tube made out of construction paper, with a thin diffraction grating at the end. The grating, available online for less than a dollar, breaks the light apart into its component wavelengths, which the camera sees as a series of colored lines.

“You can determine through our app what the light source you’re pointing the camera at is made out of,” Roche said.

Different light sources produce different spectral signatures, depending on their chemical composition. The spectrometer lets users see that white light given off by different types of bulbs is a combination of different emission lines. A fluorescent bulb will have a different series of lines than a sodium light, while an incandescent bulb emits a continuous spectrum. The app comes with a spectral library of twenty of the most common light sources, which the team anticipates expanding as the app becomes widely used.

“We hope in the future to provide access to a library of user generated spectra samples you can cross-reference on the internet,” Roche said.  “We developed this to make a fun app,” Roche added. He said that on the surface it’s a tool for people to find out what different lights are made out of, but it’s also a springboard for members of the public to learn a bit more about the wavelengths of light and the quantum nature of atoms.

Initially, the SpectraSnapp app is available only for Apple devices, but the team is exploring options to develop a version that works with Google’s Android operating system.

This is the first app put out by the APS Outreach Department. It’s aimed at anyone in the general public with an interest in physics and science. In 2010 the outreach department produced a kit, not an app, called SpectraSound, that can transmit sound from an iPod or similar device to a speaker using a laser beam. SpectraSound is for sale through the APS online store at store.aps.org (under “toys”).