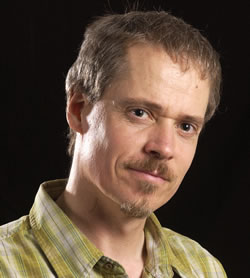 Gerry Harp hates the film “The Day the Earth Stood Still.” The physicist, who took over the reins of the SETI Institute in July 2012 from its longtime leader Jill Tarter, thinks the movie about aliens attacking Earth doesn’t do much to enhance the reputation of the beings he is hoping his team will find. But he views part of his role, as Director of the Center for SETI Research, as playing PR Rep for both the Institute and its potential extraterrestrial collaborators.

“We haven’t done a good enough job of getting the word out about the science behind SETI,” Harp acknowledges. “SETI has a hard enough time getting respect in the public,” let alone the scientific community. “There’s a reputation aspect. It’s undeniably true.”

Part of the challenge, he notes, is that SETI, whose mission is “to explore, understand and explain the origin, nature and prevalence of life in the universe,” is too often considered to be a research and career gamble.
“Ask undergraduates if they want to join SETI and they answer in the affirmative,” he explains. But towards the end of college, if you inquire again, they’ll say no, he says, because they view SETI science as potentially “high risk,” and they think “if we don’t find the signal in my career, my career will go nowhere.”

But “this endeavor is not as long a shot as people think,” he says. “The technology is growing exponentially, especially signal processing, as computers are getting faster. Every six years our search speed is increased by a factor of 10. It’s not like we’re looking at star after star after star at the same rate.” As the telescopes have improved, so has their ability to find new worlds which may be candidates for inhabitability of some form of life. Currently, many hundreds of exoplanets have been confirmed. And yet, “even though we’re experiencing all this exponential improvement, we’re looking at billions of star frequencies at one time,” he notes. “There are so many stars in the galaxy, that that is a drop in the bucket, equivalent to one cup of water from the ocean.”

SETI does have its fans among the lay community. Over 240,000 of them follow the Institute on Twitter. “SETI is a very interesting topic for the US public at large,” he says. “We have an overwhelmingly large number of people who think this research should be pursued.”

Harp didn’t begin his career with extraterrestrial aspirations. As a physics graduate student at the University of Wisconsin-Milwaukee, he specialized in quantum mechanics, and in particular electron holography. He invented a new type of photoelectron microscope and composed new computational methods able to provide 3D images of atoms. After he graduated in 1991, he soon found a tenure-track position at Ohio University where he stayed for six years.

It wasn’t until 2000 that Harp joined SETI, initially as a Senior Software Scientist, and later as a Senior Astrophysicist. He realized that the work he had done as a doctoral student could be applied in astronomy to look for alien signals in new ways. “The difference between a hologram and a regular photograph is that holography preserves information about the particles’ (electrons’ or photons’) direction of arrival at the photographic plate,” he explains. “In radio astronomy, this direction of arrival information (encoded as the signal’s phase) can be directly digitized from the radio antenna.” His research led to a technological breakthrough in which the Allen Telescope Array (ATA), the principle SETI observatory, could detect noise coming from Earth and use something like holography to determine the direction from which a signal arrives and rule out potential signals that are not coming from space.

Now, as Director, he plans to implement new techniques that will “greatly enhance the number of different signal types we can be sensitive to, including conventional carrier waves (think, AM radio) as well as various wide-bandwidth signals like those used for satellite communication on Earth,” he says. “We shall test for literally billions of signal types never probed before.”

Harp hopes to attract more talented scholars to SETI. “We find the best people to bring in are mid-career scientists who have already established themselves,” he says. Given all the technical enhancements, this is a great time to step up recruitment, he indicates. He is furthermore encouraging more publications relating to SETI research. “SETI scientists should be writing more papers and getting the kind of attribution they deserve,” he says.

This PR push is vitally important given their uphill battle. “We once thought there was a possibility of civilization around every star,” notes the physicist. “Now we can say no–life is rare, even bacteria…As we gain more and more knowledge about ourselves, we realize how special we are compared to the rest of the universe.”

Yet he is optimistic. “If I had to bet, intellectual extraterrestrial life is in this galaxy. It’s way too big for it not to be.” Moreover, “they won’t look like humans. [But] their radio technology will be similar to ours because the physics is the same.”

Alaina G. Levine is a science writer and President of Quantum Success Solutions, a science career and professional development consulting enterprise. She can be contacted through www.alainalevine.com.© 2012, Alaina G. Levine