January 2, 1839: First Daguerreotype of the Moon 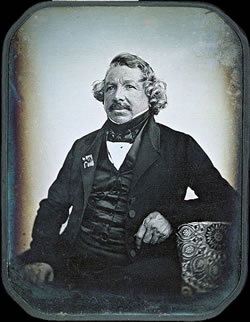 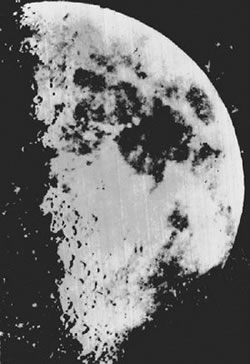 Earliest known surviving photograph of the Moon, a daguerreotype taken in 1851 by John Adams Whipple

Taking high-resolution, colorful pictures of the stars is now a mainstay of astronomy research, whether from ground-based telescopes or instruments like the Hubble Space Telescope, but this wasn’t always the case. Before the invention of photography, astronomers had to sketch what they saw in their telescopes by hand, often missing crucial details. Astronomers made reproductions by redrawing the original illustrations, enabling errors to creep in. It was the invention of the daguerreotype that showed them a far superior method was possible.

In 1814, a Frenchman named Nicéphore Niépce began experimenting with ways to record light, and managed to transfer an image to paper two years later via a camera obscura. By 1822, he had figured out how to make such an image permanent by capturing it on a flat sheet of polished tin coated with bitumen. One of the oldest surviving photographs dates back to 1825, when Niépce captured the black-and-white image of an engraving of a boy pulling a horse. But this method required a full eight hours of exposure.

Six years later, French painter and inventor Louis Daguerre– who had worked with Niépce briefly before the latter’s death in 1833–discovered how to reduce exposure time to 20 to 30 minutes. Daguerre had been apprenticed in architecture, theater design, and panoramic painting, and later invented the diorama, and his visual sensibility was fascinated by the potential of Niépce’s research.

Legend has it that he accidentally broke a mercury thermometer, giving him the idea that a shorter exposure time would produce a very faint image, but this image could be further enhanced via a chemical process involving the vapor given off by mercury heated to 75° Celsius. Daguerre then “fixed” the image, so it wouldn’t be sensitive to further exposure to light, by rinsing it in a solution of common salt. The surface was still prone to tarnishing, even by the slightest friction, so most daguerreotypes were sealed under glass before being mounted in a small folding case.

He failed to find private investors for his work, so Daguerre approached the French Academy of Sciences on January 7, 1839 about his invention. Initially, he withheld the specific details of the process, revealing the secret only to the academy’s secretary, François Arago, but all the members were enthusiastic about the potential. By August, Daguerre had “gifted” the French government with permission to make his process freely available in exchange for a modest lifetime pension–except in England, where Daguerre obtained a patent so that only licensed photographers could use his process.

These “daguerreotypes” were the earliest form of still photography and became hugely popular. Renowned figures as diverse as US President Abraham Lincoln and poet Emily Dickinson had their images captured for posterity in daguerreotypes, and the process enabled the first photojournalists to document the horrors of the American Civil War. Samuel Morse, while a fan, expressed astonishment when he realized daguerreotypes of Parisian street scenes showed no people or carriages, because the still rather long exposure time meant that objects in motion weren’t captured.

daguerreotypes were expensive, and the only way to produce copies was to use two separate cameras side by side. Also, because Daguerre had patented his invention in England, photographers needed a license to make daguerreotypes there, opening a door for competitors. An Englishman named William Henry Fox Talbot invented a rival technology, the calotype, which produced paper negatives of poorer quality than the daguerreotypes, since the images tended to darken over time, but had the capability to produce an unlimited number of positive prints. His process relied on using toxic chemicals, however, and he also patented his process, limiting its commercial spread.

Photography studios began springing up throughout Europe in the 1840s. By the mid 1860s, London’s Regent Street boasted 42 photography studios; in America, there were 77 in New York alone by 1850. It became standard practice to include photographs on one’s calling cards, the use of which was a common rule of etiquette for the social elite.

Appropriately, it was an astronomer who coined the term photography in 1839, when Johann Heinrich von Madler combined “photo” (from the Greek word for “light”) and “graphy” (“to write”). Astronomers quickly embraced the use of photographic plates because of their good resolution and the ability to make much larger images.

Daguerre himself is believed to be the first person to take a photograph of the moon, using his daguerreotype process, on January 2, 1839. Unfortunately, in March of that same year, his entire laboratory burnt to the ground, destroying all his written records and much of his early experimental work–and that historical image of the moon. A year later, John William Draper, an American doctor and chemist, took his own daguerreotype of the moon.

In 1850 Draper collaborated with astronomer William Cranch Bond to produce a daguerreotype of the star Vega. An attempt had been made in 1842 to photograph the sun, but the resolution was poor, so few details were visible. Then physicists Jean Bernard Leon Foucault and Armand Fizeau improved the process sufficiently to photograph the Sun in sufficient detail that sun spots could be seen for the first time.

Several inventors experimented with glass as a basis for negatives, but the silver solution wouldn’t stick to the shiny surface. By 1848, Abel Niépce de Saint-Victor (a cousin of Nicéphore Niépce) came up with the idea of coating a glass plate with egg white mixed with potassium iodide, and then washing it with an acid solution of silver nitrate. The result was fine detail and vastly higher quality, but–yet again–it required prolonged exposure.

Three years later Frederick Scott Archer introduced the wet collodion process, coating glass plates with a viscous liquid, which reduced exposure time to a few seconds. However, there were tradeoffs: It was still a “wet” process, requiring that all the equipment be on-site at the time the picture was taken. In 1871, Richard Maddox found a way of using gelatin instead of glass as the basis for the photographic plate, and developed a dry plate process that could produce photographs much more quickly.

Eventually, all these innovations caught the attention of American inventor George Eastman, who founded his own company based on a machine he invented to coat photographic plates with an emulsion, automating the process so photographs could be made much more quickly, in greater numbers. In the early 1900s, the Eastman-Kodak Company collaborated with several astronomical observatories, using that input to improve their emulsion technology to make a process that was even more sensitive to light.

The photographic plate dominated astronomical imaging for much of the 20th century, boosted by the use of color filters, until the advent of digital photography and CCD cameras made such labor-intensive processing obsolete. Daguerre died of a heart attack on July 10, 1851, just outside of Paris, but he undeniably left his mark not just on astronomy, but the world at large. His name is among 72 inscribed on the Eiffel Tower.