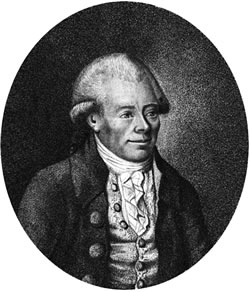 Victims struck by lightning often develop red, branching patterns across their skin, often lasting several days, likely caused by delicate capillaries under the skin rupturing from the shock of the electrical discharge–a natural example of fractals. The colloquial name is “lightning flowers,” but they are also called “Lichtenberg figures” in honor of 18th century physicist Georg Christoph Lichtenberg.

Born in 1742 to a pastor in Darmstadt, Germany, Lichtenberg was the youngest of seventeen children, and evinced a natural curiosity and penchant for math and science at an early age. Initially his family could not afford to pay for his education, but a grant from a generously minded aristocratic patron enabled the boy to attend Göttingen University. Eventually he became a professor of physics there, a job he held for the rest of his life.

Lichtenberg cut an interesting figure: a spinal deformation left him hunchbacked, a condition that caused serious difficulties with his breathing in his later years. But he enjoyed an excellent reputation as a satirist as well as a scientist, and was  wildly popular with women, enjoying several romances before marrying one Margarethe Kellner, who bore him six children.

Today Lichtenberg’s literary reputation is most closely associated with his aphorisms, collected over many years in personal journals he called “waste books” (Sudelbücher). In these waste books, he jotted down random facts, observations on human nature, short sketches from his life, even his current bedside reading material, along with scientific notes from his many experiments.

This was an era when scientists across the Western world were fascinated by electricity–or, as they termed it, “electric fluid,” with many engaging in experiments to study charged objects and how sparks jumped between them, using all manner of apparatus, including Leyden jars and electricity tubes. Benjamin Franklin was one of them, proposing his famous experiment with an elevated “lightning rod” or wire to “draw down the electric fire” from a storm cloud, with the experimenter standing in the protection of an enclosure similar to a soldier’s sentry box. At least one scientist (Georg Wilhelm Reichmann) died in the attempt to replicate Franklin’s experiment, due to an unfortunate encounter with ball lightning.

Lichtenberg’s enthusiasm for the electric fire remained undiminished by such tragic accidents. He was among the first to bring Franklin’s lightning rods to Germany, installing several around his home in Göttingen, and was an early adopter of using apparatus in his own lab experiments. He constructed a large electrostatic generator, known as an electrophorus, measuring six feet in diameter, and used that to study the behavior of the electric fire–including figuring out how to record the branching patterns left in the wake of electrical discharges.

First he used the electrophorus to administer a high voltage charge to an insulating material, such as resin, glass or hard rubber. Then he sprinkled the material’s surface with a mix of powdered sulfur, red lead and lead tetroxide and watched the patterns form, before pressing a piece of paper onto the surface to transfer those images to the paper. Lichtenberg noted two distinctive types of patterns: one for a positive charge, which had longer, more elaborate branching, and the other for a negative charge, which more closely resembled a shell. His conclusions were published in his 1777 memoir, Super Nova Methodo Naturam ac Motum Fluidi Electrici Investigandi.

The fundamental principles underlying Lichtenberg’s experiments set the stage for modern plasma physics research. In the 1920s, Arthur von Hippel and others recorded light from high voltage electrical discharges onto photographic film. Von Hippel reasoned that the unique Lichtenberg patterns resulted from interactions between the ionized gas and the dielectric surface of the material, and discovered he could change the length of the branching pattern simply by increasing the applied voltage or reducing the surrounding air pressure.

That, in turn, led to the invention of klydonographs, instruments to record the high voltage discharges and polarity of unusual power surges, such as when lighting strikes a power line. Access to such data enabled engineers designing power grid systems to find effective protective countermeasures against lighting strikes and similar unplanned surges.

Lichtenberg’s experiments also provided the basis for to the invention of the Xerox machine, thanks to Chester Carlson’s kitchen experiments in his Queens apartment in the 1930s. Carlson called it “electrophotography.” His theory was that if the image of an original photograph or document were projected onto a photoconductive surface, current would only flow in the areas that light hit upon, and not in the areas of darkness, i.e., the print. He figured out how to get dry particles to stick to a charged plate in a pattern corresponding to an image shining on the plate. Then he transferred those powder images to wax paper, heating the sheets to melt the wax for a permanent copy.

In the 1940s, Arno Brasch and Fritz Lange were working with one of the first particle accelerators (they called it a “Capacitron”) at AEG in Germany, capable of producing high-voltage electron beams that left bluish flame-like tails of ionized air in their wake. Brasch and Lang were the first to inject free electrons into cubes of plastic, and the resulting electrical breakdown captured the branching pattern of Lichtenberg figures perfectly in three dimensions. Today, the Dynamitron at Kent State’s Neo Beam facility does similar work, and one can buy such “frozen lightning” sculptures as artwork.

Lichtenberg enjoyed a certain amount of prestige and respect from his scientific peers while he lived. Alessandro Volta visited Göttingen in 1784 expressly to meet Lichtenberg and observe some of this experiments, and Karl Friedrich Gauss attended several of his lectures. His name is less well known today, but he would no doubt be gratified to find these eponymous fractal patterns still inspiring scientists and artists alike, nearly three centuries later.