Ig Nobel Research is Serious, After All 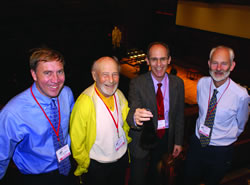 The winners of the 2012 Ig Nobel physics prize (from left to right) Patrick Warren, Joseph Keller, Raymond Goldstein and Robin Ball deduced the mix of forces acting on a human pony tail.

APS journals were big winners at this year’s Ig Nobel prize ceremony, held in late September in Cambridge, Massachusetts. Both the Physics Prize and the Fluid Dynamics Prize were presented for research that was first published in the Physical Review.

According to their founder, Marc Abrahams, the annual Ig Nobel prizes are awarded to research that “makes people laugh, then makes them think.” They’re given to scientists whose scientific publications on the surface might sound silly or even frivolous, but have meaningful science behind them.

For instance, characterizing the physics of ponytails was first published in February’s Physical Review Letters. The authors of the paper, titled “Shape of a Ponytail and the Statistical Physics of Hair Fiber Bundles,” developed an equation to predict the shape of almost any configuration of hair sticking out of the back of one’s head.

“We set ourselves the task of trying to understand the balance between the elasticity of filaments, their weight and the curvatures, the random curliness that gives the volume to hair,” said co-author Raymond Goldstein of the University of Cambridge. “Hair has a characteristic stiffness and mass per unit length which together with gravity, define a length scale over which gravity will bend them.”

Less than two inches, and the hair will stick straight out, largely unaffected by gravity. Longer than those two inches, and the hairdo will bend under its own weight. The team dubbed the ratio of a person’s actual length of hair, to those two critical first two inches the “Rapunzel Number,” after the fairytale damsel in distress. The larger the number, the bigger effect gravity has on the hair.

Also ripped from the pages of the Physical Review is Rouslan Krechetnikov and Hans Mayer’s research into the fluid dynamics of a cup of coffee. Their paper, “Walking with coffee: Why does it spill?” was first published in Physical Review E in April.

As it turns out, the period of oscillation for coffee in a standard mug is almost exactly the same as the length of time for a person to take a step. When someone carrying a cup of joe takes a step, the coffee sloshes forward then back again. By the time the liquid flows forward a second time, the person has taken a second step adding to the forward momentum of the drink. The sloshing keeps intensifying until finally the coffee crests over the lip of the cup, and spills onto the ground.

“In general this problem is a confluence of several subjects, namely fluid dynamics, dynamical systems, biomechanics and behavioral dynamics,” Krechetnikov said. He added a word of warning to espresso drinkers. The oscillation frequencies of tiny espresso cups are even closer to a person’s average stride, making it even more likely for one’s drink to spill.

His investigation into the physics of coffee stems from research into other, more serious, areas of fluid dynamics, such as aerodynamics, hydrodynamics and geophysics.

“We need to understand the underlying physics and also to develop the theoretical foundation,” Krechetnikov said. “Walking with coffee is just one of the examples of such kinds of systems.”

Other winners at this year’s ceremony include the Medical Prize for research into preventing colonic gas explosions during colonoscopies, the Peace Prize for a company that converts obsolete Russian Munitions into nanodiamonds, and the neuroscience prize for a team of researchers who discovered that due to improperly corrected statistical errors in FMRI scan data, they were able to detect active brainwaves in a dead fish.