CSI: Physics-The Case of the Fabulous Career in Forensics 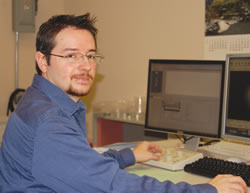 Steve Compton
Steve Compton doesn’t interrogate suspects nor does he analyze chalk outlines of dead bodies. But he is a detective and does crack cases. Instead of a gun, his weapons are his knowledge of physics and an impressive arsenal of microscopes. He’s a Senior Research Scientist with MVA Scientific Consultants, a Duluth, GA-based firm that uses science to solve problems for clients in insurance, pharmaceuticals, manufacturing, industrial hygiene and the environment, most of which have legal cases associated with them. It’s forensics meets physics, so take that, CSI!

With an expertise in tiny materials, Compton’s perps are airborne particles. “My background in physics helps me understand the nature of small particles in addition to the analytical tools I use everyday: microscopy, x-ray spectroscopy, diffraction pattern analysis, and infrared spectroscopy.” He is often called to consult on situations involving asbestos contamination or product characterization in pharmaceuticals. For example, if a person worked within an asbestos-laden environment and became sick, Compton would help determine whether the asbestos from the job site was the cause. To do so, he would reconstruct the person’s activities with asbestos products and use optical and electron microscopes to determine past exposures. In a hypothetical pharmaceutical case whereby a recurring stain is found on a panoply of pills, Compton might examine the pills with a polarized light microscope or a scanning electron microscope to figure out how the offending chemical got into the manufacturing process.

He recently contributed to a dispute involving carbon black, or engineered carbon that is manufactured for various industrial purposes, such as a structural additive to tires. Residents of a community near a carbon black plant expressed concerns that their property was being dirtied by the factory. Compton scrutinized the engineered soot under a transmission electron microscope and compared it to dust particles found on homes nearby. He discovered that on many occasions, the dirt was something other than carbon black.

“Most of the cases I have worked, I am not at liberty to discuss,” he says, in part because there are either legal or confidentiality considerations. “I don’t typically do field work, but there was one case involving a famous athlete/actor in which I was asked to fly out to Utah to collect some gravel samples from the side of a highway, But I can’t give you any more details than that!” On another case, MVA was asked “to analyze and perform a study on an asbestos-containing firesuit. I was the only one that could fit in the suit, so I volunteered to walk around inside a sealed chamber with the firesuit over my respirator and two protective full-body suits while a certified industrial hygienist collected air samples from within the chamber. Fiber release studies like this are always fascinating, but quite often the results cannot be discussed due to legal settlement conditions.”

Sometimes, the truth is priceless to a client, says Compton. For example, one case centered around a young girl who had developed signs of lead poisoning with no obvious source. “Microscopic analysis of the dust in her home revealed particles of lead-containing fly ash,” he explains. “Those particles were then traced to a nearby stockpile which ultimately had to be cleaned up by the Environmental Protection Agency.”

Compton is proud to wear his firm’s only badge from a physics department. As an undergraduate at the University of Georgia, Compton originally majored in chemistry. “But I was attracted to the power that the laws of physics provides in allowing one to understand the world around us,” he says. “No other field, except perhaps mathematics, is so broad and all-encompassing in our daily life as physics. In my undergraduate courses, I started finding answers to questions that I hadn’t even considered before.”

Compton was convinced that physics was the way to go when his undergraduate adviser told him that, instead of preparing him for a specific track, “physics could provide me with an understanding of the world and an ability to solve problems that could take me anywhere,” he recounts. “In my case, that’s 100% true. There is a level of satisfaction that comes from listening to a client’s problem and helping them find the solution.  That relationship with the client and the ability to make an immediate impact on an individual after a hard day’s work is something that physics typically doesn’t provide. And not all of our cases are so emotionally charged, but there is an even deeper level of satisfaction that comes from helping a little girl track down the source of lead poisoning that makes her so sick.”