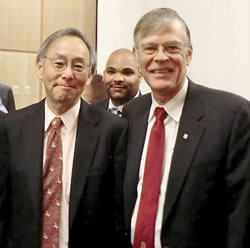 Leading scientists and policy makers participated in a briefing on Capitol Hill on September 12, asking the government to help improve the organization of research in optics and photonics. The briefing was based on a recent report, titled “Optics and Photonics: Essential Technologies for our Nation,” that calls for a national strategic plan to focus public and private research in the field.

Though not specific on what shape such an initiative would ultimately take, the speakers at the briefing highlighted a number of specific recommendations and goals in different subfields, including energy applications, communication, medicine, national defense and manufacturing.

Advances in optics and photonics research have come from a large number of disparate institutions, and the report wants the federal government to help organize and foster more cooperation and collaboration to keep the United States competitive.

“We’re not asking for more money,” said Alan Willner, a professor at the University of Southern California, and co-chair of the committee that prepared the report. “The committee recommends the federal government develop an integrated initiative in photonics.”

The report compared its vision for a strategic plan to the National Nanotechnology Initiative, established in 2000. “We don’t have a roadmap. The semiconductor industry does, we don’t,” Willner said.

Presenters said that other parts of the world have developed such a strategic plan for their photonics industries. Taiwan, China and Germany have all invested significantly in research for new optics and photonics technology.

“In the E.U. there is a very strong and sustained focus on optics and photonics,” said Eugene Arthurs, CEO of SPIE, an international society devoted to the science and applications of light.

One of the major recommendations of the report called for a national initiative to keep better track of the economic impact of the optics and photonic industries as a whole. The report identified specific areas where optics and photonics research could help address national issues. New optics and photonics technology would be central to speeding up the internet by a factor of 100, for making additive manufacturing, also known as 3-D printing, more economical and widespread, for improving the efficiency and lowering the costs of LEDs to replace traditional light bulbs, and for developing new defense technology for surveillance, space communication and laser weapons.

The speakers presenting the report at the briefing also highlighted the economic impact that optics and fundamental research have already had on society.

“Optics and photonics have become established as enabling technology for a multitude of industries vital to our nation’s future,” Willner said. “The internet as we know it wouldn’t exist without photonics.”

Paul McManamon, technical director for the Ladar and Optical Communications Institute at the University of Dayton and co-chair of the committee, elaborated on the point.

“If it wasn’t for the [optic] fibers, you wouldn’t be downloading music, because you couldn’t get the bandwidth,” McManamon said.

Baer emphasized the medical benefits of optics and photonics research.

“New procedures have the potential to lower costs and increase our life spans,” Baer said. He pointed to scanners that can show detailed images of cancers and other disease. “With a CT scan, we now have a very accurate 3-D model… of the inner structure of the human body.”

The committee has at least one member of Congress supporting their proposals. Rush Holt (D-N.J) spoke before the presentation, and emphasized the importance of investing in science.

“The reason we are discussing optics and photonics today…is to make the case, the policy case, that we should be investing more in research and development,” Holt said. “Research and development can put people to work in the short term as well as provide benefits in the midterm and long term… It is money well spent.”

The report was prepared by the National Research Council, an arm of the National Academies. Earlier in the day, a separate briefing was held in downtown Washington for members of government agencies and policy makers, at which the featured speakers were former Intel CEO Craig Barrett, and Secretary of Energy Steven Chu. Both events were co-sponsored by the APS Division of Laser Science, in partnership with the Optical Society, SPIE, and IEEE-Photonics.