Media Fellows Train on the Job

Ed. Note: Each year, as part of a program run by the American Association for the Advancement of Science, APS sponsors two media fellows, who spend the summer at a media outlet, learning the craft of science writing. Sometimes this leads to a career in journalism; sometimes it produces a scientist with a more nuanced understanding of how the media operate. In the following two articles, 2012 media fellows Kerstin Nordstrom and Meeri Kim describe their summer experiences.


Reporters Have to Tell the Story 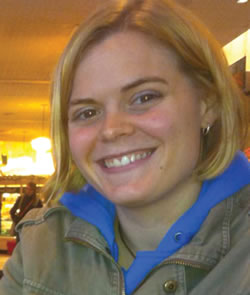 When I looked at the extensive agenda for the AAAS Mass Media Fellows orientation, this podcast addict only saw one thing: a field trip to NPR.

The trip was a blast, but strangely, an entirely forgettable quote is what stuck with me. After we all bragged about our innumerable scientific credentials to the NPR science desk, Nell Greenfieldboyce told us, “Remember, (this summer) you are a science REPORTER.”

People need a story to care, replete with plot and characters.

As we filed away from the NPR science desk, I overheard Greenfieldboyce, only half-joking, wishing she could go to a local paper for the summer.

So I took her advice to heart when I went to my summer placement site, The Raleigh News & Observer, a local paper.

Before the fellowship, I had been focused on science writing. Of course, this fellowship gave me writing experience, but I’ve been writing for over two decades.

I did more reporting this summer than I ever have in my life, and I realize how important it is for good science stories. You may be the most brilliant wordsmith with the best grasp of the science, but if you don’t have a story and quotes to back it up, it’s worthless to your editor, because people won’t read it. I agonized over plotlines, and introduced new characters as needed. I had in-person interviews as much as possible. Even when the plot isn’t the strongest, a small sprinkle of a researcher’s personality can take a piece out of introductory textbook territory.

After this fellowship, I am back on the academic track, though in the future I hope to write freelance about topics that interest me academically. I have always thought scientists should be engaged in public communication. Some colleagues may dismiss it as a waste of time, but the public has a right to know what it is funding.

This summer reminded me that the public needs and wants more science reporting.

Comments, phone calls, and emails about my stories tended to be of two flavors. Some readers who were simply happy to read science stories in the N&O hungered for more. After all, I was the only science reporter in the Research Triangle, an area with an abnormally high concentration of PhDs. Other readers either did not understand the scientific method itself or used their ideology to refute stories. More disclosure of science will not solve these problems, but it can’t hurt, and is certainly beneficial if younger readers are exposed.

However, print media is declining, online advertising is less lucrative, and people don’t want to pay for online content. It’s too bad that science reporters also need to eat.

The problem is challenging, but needs to be solved.

Lastly, my reporting experience gave me another, admittedly selfish, reason to care about science communication.

I expected big-shot professors to be unreachable, or to be aloof or grumpy when talking to a “reporter.” I know a few who might fit in one of those boxes. In reality, I mostly found the opposite: the more impressive the CV, the faster they called back. Their willingness to engage has attracted success in the form of students, collaborators, and grants. And it’s a positive feedback loop–more students, collaborators, and grants mean even more opportunities to engage, spawning more research opportunities.

With no more than an attitude adjustment, all scientists can make their science better. I’ll be taking this advice to heart for the rest of my career.

No Time to Rest on your Laurels 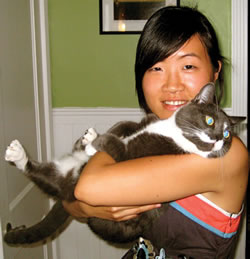 My time spent at the Philadelphia Inquirer as a AAAS Mass Media Fellow proved to be a fantastic crash course in journalism and the world of breaking news.

From day one, I was thrown into the deep end. My editor called me during my fellowship orientation and asked if I could cover the American Diabetes Association conference. I felt slightly worried about my inexperience, given that I had never written a print article in my life (and no, academic manuscripts don’t count). But I went along with it.

The morning of the first day, he told me to attend the sessions, find stories of interest, and write two pieces by the end of the day, each about four or five grafs. Revealing that I was still in physicist mode, I embarrassingly thought he meant “graphs” like figures or plots.

When I realized he meant paragraphs, more panic set in. Wait–I don’t even know the difference between Type I and Type II, and I’m expected to find two compelling diabetes research topics to write articles on, all in the span of a day?

After the last talk wrapped up, around 5 p.m., I headed back to the office with frantically scribbled notes from the one session that I could actually understand, about ways to reduce one’s risk of developing Type II diabetes. I started writing up whatever I had, and an hour later, my editor yelled out that I needed to “put the pedal to the metal” and start finishing up.

Heart racing, I realized, I could sit here and freak out or just get this done. And you really don’t have a choice–you get it done because, in the news world, you HAVE to. So you panic at first, but then it dissipates because you become too preoccupied with finishing your piece to notice.

In the span of the next half-hour, my stories were checked over, edited, and posted online.  As opposed to research, the news world has the ability to provide instant gratification. In the span of several hours, a story idea turns into a capsule of information released into the public sphere.

And just as quickly, you move onto the next. There’s no resting on your laurels in journalism, said one editor. I ended up with a total of five posts from the conference and by the end of the third day, I was so deliriously hungry and tired, I couldn’t find where I parked my bike for 15 minutes.

But that crazy first weekend gave my editor some faith in me, I think.  Not to mention, I had a bit more faith in myself.

For the next ten weeks, I worked on a mix of breaking news stories and longer articles, with three ending up on the front page.  I shot and edited three web videos, covered a Michelle Obama event complete with White House press pass, and interviewed Michael Moore, Ezekiel Emanuel, and Wendell Potter. I had a brief foray into investigative journalism. Oh, and a therapy dog took my socks off.

All in all, a wonderfully unpredictable summer. I learned something new every day and never had more fun–while working so hard–in my life.