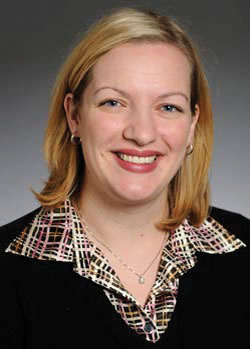 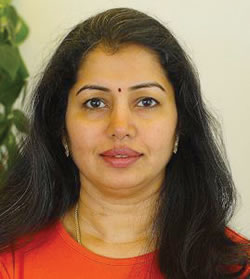 Sujatha Sampath
This year’s recipients of the M. Hildred Blewett Fellowship are Michelle Ntampaka of Carnegie Mellon University and Sujatha Sampath of the University of Wisconsin-Milwaukee. The recipients are chosen by the APS Committee on the Status of Women in Physics.

The Blewett Fellowship is dedicated to helping women who are returning to research careers that had been interrupted for family or other reasons. It is a one-year grant, which can be renewed, of up to $45,000 for use towards a wide range of necessities, including equipment procurement, stipend, travel, tuition, and dependent care. This is the eighth year the Fellowship has been awarded.

Michelle Ntampaka says that she wants to be Neil deGrasse Tyson someday, and the Blewett Fellowship is helping her reach her goal of being a science communicator.

Ntampaka started out studying education and physics at Grove City College in western Pennsylvania. As part of her degree, she would help out at some of the local schools in the area.

“I knew I wanted to be a teacher and I happen to be good at physics,” Ntampaka said.

After she graduated, she started working full time at one of the local schools, but then decided to return to school and get her master’s degree. She wound up at Carnegie Mellon, and it turned out to be a perfect fit for her. She took one class a semester for about five years to finish her masters. To help put herself through the degree, she worked at the university as a laboratory demonstrator, the person in charge of the different experiments used in lectures.

“I was basically taking care of all the demonstrations for all of the faculty. It was a great way to learn because I was interacting with all the faculty,” Ntampaka said. At the same time it took a lot to find the right balance between work and classes. “It really was a juggling act.”

In 2010, just a few months after she graduated with her masters, her son Joseph was born. She decided to take a year off before starting her PhD.

“I found the juggling act, plus having a child was just too much,” Ntampaka said.

When she returned to Carnegie Mellon to start her PhD, she enrolled in an astrophysics course because it was the only one that fit in with her schedule. From there, she was hooked.

“I love looking at the questions of the big universe. I just loved [the class],” Ntampaka said. “It was very serendipitous in how I ended up in astrophysics.”

She said also that her advisor, Hy Trac, has been very supportive to her.

“Dark matter halos are sort of these knots of dark matter. We can simulate them very easily. We can detect them, but not directly. But we can detect galaxies,” Ntampaka said. Her research compares astronomical observations of galaxies taken from the Sloan Digital Sky Survey with computer models of dark matter halos. “I will be doing simulations, and looking at data sets from astronomers and how to connect those two.”

In addition to her research, she and her husband Bertin have been working to help train teachers in her husband’s native Rwanda. They started out with a book drive and collected more than 5,000 textbooks for the country’s disadvantaged school system.

They also traveled to Rwanda in 2011 at the request of the minister of education. There they trained teachers on how to do classroom demonstrations with few resources. She added they hope to continue working with students and teachers in Rwanda.

“I think we’re going to work on developing a program if what we do at this one school works well,” Ntampaka said. “We’re going to take a step back and become a laser bean rather than a flood light.”
For now, Ntampaka plans on using the Blewett Fellowship to go back to being a full time student so she can finish her research and PhD.

“The Blewett Fellowship was a game changer, it really was.” Ntampaka said. “This has just given me the ability to put blinders on and focus on what I need to do.”

It was while she was in high school in India that the wonder of the natural world around her grabbed Sujatha Sampath’s attention and never let go.

She went on to major in physics with a minor in chemistry at the University of Madras in Chennai, and completed her masters at Rani Durgavati University in Jabalpur. For her PhD, she did her research at the University Grants Commission-Department of Atomic Energy Consortium for Scientific Research in Indore. There she started focusing on research into condensed matter physics.

“When I started there, the institute was only a few years old,” Sampath said. Together with her advisor, she helped build the lab to study the thermal conductivity of materials near absolute zero. She also studied heavy fermions, and helped make probes for amorphous materials. She found herself drawn to research on glass and amorphous materials.

For her postdoc work, Sampath landed a spot using high intensity X-rays to study the atomic structures of different metal hydrides at Argonne National Lab, just outside Chicago. She found the materials interesting, because several could be used for rocket fuel and energy storage. She helped look for ways to substitute other materials for hazardous beryllium.

“As a basic physical scientist, I am excited about how things work at the atomic and subatomic levels,” Sampath said. “I would definitely think that the next logical step in my mind is to use that information to apply it to some useful materials for society.”

She got married while employed as a postdoc, and her husband took a job with General Electric Healthcare, located two hours north in Milwaukee. For a while she stayed in Chicago, then moved to Wisconsin to join him, and drove down to her lab for the week.

“Being an experimental scientist I had to be in the lab,” Sampath said. Ultimately the hours spent in the car driving between the two cities took their toll. “The commute wore me out.”

After her grant finished up, she started looking for jobs in Milwaukee, but had a hard time finding a full-time spot. She started working at a series of temporary and part-time positions. Her background working with high intensity X-rays helped her get involved with different research projects at Argonne again. One was studying protein folding, and another was collaborating with researchers at the University of Wyoming who are trying to understand and replicate spider silk.

“Spider silk is an amazing biological material. For the same length and diameter, it’s stronger than steel and much more flexible than most manmade materials like Kevlar and nylon,” Sampath said. “It all comes down to how the nanostructure in the spider silk is arranged… and that is still something that is not well understood, and that is why they came to us.”

At the same time, she kept looking for a job in Milwaukee. Eventually in 2010 she was able to get a temporary position at the University of Wisconsin-Milwaukee working at their synchrotron for research using X-ray diffraction to study excess charge in layers of zinc oxide and magnesium oxide.

She still has a lot of leftover data from her work on spider silk, and she hopes that with the Fellowship, she can work to get some of that finished up.

“There is still a lot of work that needs to be analyzed and published,” Sampath said. “I am hoping to publish all my data acquired so far.”

She is also looking to keep expanding her skill set. The University of Wisconsin-Milwaukee is getting a new electron microscope soon, and Sampath is hoping to master another important piece of equipment.