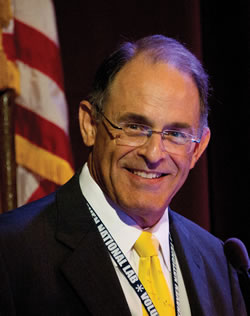 APS members elected Sam Aronson of Brookhaven National Laboratory to be the next vice-president of the Society in elections that concluded on June 29. As the newest member of the presidential line, Aronson will become APS President in 2015.

The members also voted for Marcia Barbosa of the Federal University of Rio Grande do Sul, Brazil to be International Councilor, Marcelo Gleiser of Dartmouth College to be General Councilor, and Paul McEuen of Cornell as Chair-elect of the Nominating Committee.

Aronson will assume his office in January of next year, replacing Malcolm Beasley of Stanford University, who will become President-elect. This year’s President-elect, Michael Turner of the Kavli Institute for Cosmological Physics at the University of Chicago, will assume the role of President, while the current President, Robert Byer of Stanford, will remain on the APS Council and Executive Board as past-President.

Aronson is currently the director of Brookhaven National Laboratory and President of Brookhaven Science Associates, the organization in charge of running the lab. He was named director in 2006, after serving as associate lab director since 2005. Aronson first came to Brookhaven in 1978 as an associate physicist, and worked his way up through the physics division to become its associate chair in 1987 and its deputy chair in 1988. In 1991 he served as senior physicist on the PHENIX detector while the RHIC particle accelerator was being built. He later returned to the leadership of the physics division and became its chairman in 2001. He was elected an APS Fellow in 2001 and a Fellow of the American Association for the Advancement of Science in 2005.

In a statement on the Brookhaven website, Aronson wrote,

“I am much honored to have been given the opportunity to lead the APS. I hope to work with the rest of the leadership team over the next few years to leverage APS’[s] considerable influence in advocating on behalf of the U.S. physics community,”

In his candidate statement, Aronson further explained his vision as part of the presidential line.

“The APS has been a strong voice in support of science literacy, the excitement and importance of scientific discovery and science-based policy making,” Aronson wrote. “I believe this advocacy is among the most important tasks of the APS and I would like to work to extend and expand the APS’ reach outside the scientific community to communicate this to the next generation of physical scientists, policy makers and informed citizens.”

Marcia Barbosa is a statistical physicist at the Federal University of Rio Grande do Sul, Brazil where she studies the thermodynamic behavior of complex fluids. She is currently the director of the physics institute at her university. In addition she is also currently the chair of the physics committee at the Brazilian funding agency, the National Council for Scientific and Technological Development, and a member of the National Council of Science and Technology which is chaired by Brazil’s president.

“Physics is on the edge of new discoveries in many sub fields from high energies to astrophysics and nanoscience. However, this very interesting moment coincides with economic difficulties that affect not only the everyday life of the universities and the research centers but the large programs that are fundamental in these new discoveries,” Barbosa said. “The community has to be prepared to show to the society that physics and in particular basic physics is very important not only for restoring the economic growth but also for doing that in a more sustainable and socially fair way.”

She added that as International Councilor she hopes to strengthen ties with societies in other parts of the world. “Establishing programs and exchange of experiences between the physical societies of these countries and APS would be beneficial for both. In particular I hope to be able to serve as a link for the science with no borders, a new program that send students from Brazil to other countries.”

Marcelo Gleiser is a theoretical physicist at Dartmouth College who studies the many intersections of field theory, relativity and cosmology. He has been at Dartmouth since 1991 and received the Presidential Faculty Fellows Award from Bill Clinton in 1994. He has served on several of NSF and NASA advisory panels. In addition, he has worked to promote science to the public by giving public lectures, appearing on television, writing three popular books about particle physics and helping to start NPR’s science and culture blog "13.7."

Paul McEuen is a physicist at Cornell where his work focuses on the electronic, mechanical and optical properties of nanostructures and their applications. He served on the APS Division of Condensed Matter Physics Executive Committee from 2003 through 2006. In addition he has been on numerous government advisory committees, including the Department of Energy’s Basic Energy Sciences Advisory Committee, Grand Challenges in Energy Subcommittee and the National Research Council’s Decadal Survey Team on Condensed Matter and Materials Physics.

“We must more effectively communicate the content and value of our research to the public and to policymakers,” McEuen said. “This is especially important in these times of extreme budgetary and societal pressures. Simultaneously, we must resist the continual bureaucratic creep from universities and funding agencies that slows down research and makes us less effective.”