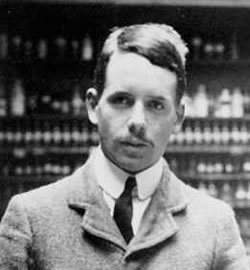 Science students everywhere are familiar with the modern periodic table, which organizes the chemical elements based on their properties and atomic numbers. Earlier versions, however, followed a far looser organization. In 1789, for example, Antoine Lavoisier grouped his list of 33 elements into gases, metals, earths, and nonmetals. But chemists longed for a classification scheme that evinced more precision.

Dmitri Mendeleev provided a better framework in 1869 with his precursor to our modern periodic table of elements, organizing them according to the sequence of atomic masses. But there were issues with how he chose to order the elements in his table. For instance, Mendeleev assigned the atomic numbers 27 and 28, respectively, to the metals cobalt and nickel, based on their physical and chemical properties, even though cobalt had a slightly larger atomic weight and technically should have followed nickel. It was an intuitive leap: Mendeleev based his decision on the known chemical and physical properties of both elements.

There were also irregularities in the location of argon and potassium, as well as the positioning of the rare earth elements. When chemists discovered the existence of chemical isotopes, they realized that atomic weight was not the optimal criterion for ordering the periodic table. A young British physicist named Henry Moseley would provide them with a more scientifically rigorous classification scheme.

Moseley was born to privilege in 1887 in Dorset, England. His father was Henry Nottidge Moseley, a biologist and professor at the University of Oxford, and his mother was the daughter of biologist John Gwyn-Jeffreys. So the boy’s early interest in zoology came naturally, as did his academic prowess. He was a stellar student at the Summer Fields School and received a scholarship to Eton. He went on to earn a bachelor’s degree from Oxford’s Trinity College in 1910, before joining Ernest Rutherford’s laboratory at the University of Manchester. Initially he conducted physics demonstrations and worked as a teaching assistant, but soon traded in teaching to work as a research assistant.

Moseley first set about improving x-ray spectrometry, which had only recently been introduced. The spectrometer consisted of a glass vacuum tube in which electrons were fired at metallic targets, such as cobalt and nickel. Those electrons emitted photons in the x-ray regime, producing photographic spectral lines on x-ray film attached on the outside of the vacuum tube. Moseley combined this new technique with Bragg’s law of diffraction to measure the various x-ray spectra associated with specific elements. In the process, he uncovered a precise mathematical relationship between well-defined lines in an element’s x-ray spectrum and its atomic number. Today we know this as Moseley’s law.

So the atomic numbers of the elements weren’t as arbitrary as physical chemists originally thought. Moseley’s work provided a firm experimental foundation for Mendeleev’s earlier intuitions, resulting in more accurate positioning of the elements within the periodic table.

In fact, Moseley was able to use this mathematical relationship to correctly identify gaps in the periodic table, predicting that there should be elements with atomic numbers 43, 61, 72, and 75. All these elements were subsequently discovered: two radioactive synthetic elements–technetium and promethium, both created in nuclear reactors–and two naturally occurring elements, hafnium and rhenium. (It should be noted that Mendeleev also predicted the missing element we now know as technetium, 50 years earlier.) Moseley’s work also established that there were only 15 members in the lanthanide series of rare earth elements.

In 1914, Moseley left Rutherford’s Manchester laboratory, planning on returning to Oxford to pursue his physics research, but the outbreak of World War I put a wrench in those plans. Instead, he enlisted in the Royal Engineers of the British Army, serving as a technical officer of communications during the months-long Battle of Gallipoli in Turkey.

On August 10, 1915, Moseley was in the midst of sending a military order when a sniper’s bullet caught him in the head and killed him. He was 27. Given all that he had accomplished at such a young age, Isaac Asimov noted that Moseley’s death “might well have been the most costly single death of the War to mankind generally.” Indeed, because of it, the British government established a new policy barring the country’s most prominent scientists from engaging in active combat duty.

Asimov also famously speculated that, had he lived, Moseley might well have won the Nobel Prize the following year. Certainly, the trend for Nobel Prizes in physics at the time seemed to favor work related to Moseley’s research. The committee chose x-ray crystal diffraction in 1914, and the first use of x-ray spectroscopy to study crystalline structure in 1915, while the 1917 prize honored work determining the telltale x-ray frequencies emitted by different elements. (There were no prizes awarded in physics or chemistry in 1916.)

Moseley’s work was certainly on a comparable level, and also provided solid experimental data in support of the Rutherford model of the atom, later refined by Niels Bohr. It is easy to forget that this model–which held that the atomic nucleus contains positive nuclear charges equal to its atomic number in the periodic table–was not immediately accepted by the scientific community, “You see actually the Rutherford work was not taken seriously,” Bohr observed in 1962. “We cannot understand today, but there was no mention of it any place. The great change came from Moseley.”

Who knows what that talented young scientist might not have gone on to accomplish had he survived the war?