Has the Battery Bubble Burst? 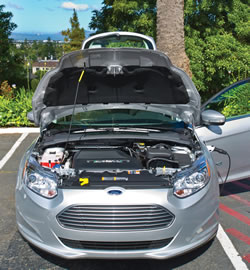 The 2013 Ford Energi plug-in hybrid, with the Golden Gate Bridge visible in the background.

Three years ago at a symposium on lithium-air batteries at IBM Almaden there was great optimism. The symposium “Scalable Energy Storage: Beyond Lithium Ion” had as a working message: “There are no fundamental scientific obstacles to creating batteries with ten times the energy content–for a given weight–of the best current batteries.”

Optimism had all but vanished this year at the fifth conference in the scalable-energy-storage series in Berkeley, California. The symposium announcement reads: “Although new electric vehicles with advanced lithium ion batteries are being introduced, further breakthroughs in scalable energy storage, beyond current state-of-the-art lithium ion batteries, are necessary before the full benefits of vehicle electrification can be realized.” The mood was cautious, as it is clear that lithium-ion batteries are maturing slowly, and that their limited energy density and high cost will preclude producing all-electric cars to replace the primary American family car in the foreseeable future. “The future is cloudy” is how Venkat Srinivasan, who heads the battery research program at Berkeley Lab, summarized the conference.

Electric cars have a long history. They were popular at the dawn of the automobile age, with 28 percent of the automobiles produced in the United States in 1900 powered by electricity. The early popularity of electric cars faded, however, as Henry Ford introduced mass-produced cars powered with internal-combustion engines in 1908.

Gasoline was quickly recognized as nature’s ideal fuel for cars: it has a very high energy density by both weight and volume–around 500 times that of a lead-acid battery–and it was plentiful, inexpensive, and seemingly unlimited in supply. By the 1920s electric cars were no longer commercially viable and disappeared from the scene. They did not reappear until late in the 20th century as gasoline became expensive, supplies no longer seemed unlimited, and concerns over the possible effect of combustion of fossil fuels on global climate reached public awareness.

Powering cars with electricity rather than with gasoline offers the dual advantages of eventually eliminating our dependence on imported fossil fuels and operating cars with renewable energy resources. Eliminating dependence on petroleum imported from often-unfriendly countries will greatly improve our energy security, while powering cars from a green grid with solar and wind resources will significantly reduce the amount of CO2 released into the atmosphere.

The major barrier to replacing the primary American family car with electric vehicles is battery performance. The most significant issue is energy storage density by both weight and volume. Present technology requires an electric car to have a large and heavy battery, while providing less range than a car powered by gasoline.

Safety is an issue much discussed in the press. Although there are more than 200,000 fires per year in gasoline-fueled cars in America, there is widespread fear of electricity. Batteries in cars powered by electricity will surely burn in some accident scenarios; the fire risk will probably be similar to gasoline-powered cars.

Stored energy in fuel is considerable: gasoline is the champion at 47.5 MJ/kg and 34.6 MJ/liter; the gasoline in a fully fueled car has the same energy content as a thousand sticks of dynamite. A lithium-ion battery pack has about 0.3 MJ/kg and about 0.4 MJ/liter (Chevy VOLT). Gasoline thus has about 100 times the energy density of a lithium-ion battery. This difference in energy density is partially mitigated by the very high efficiency of an electric motor in converting energy stored in the battery to making the car move: it is typically 60-80 percent efficient. The efficiency of an internal combustion engine in converting the energy stored in gasoline to making the car move is typically 15 percent (EPA 2012). With the ratio about 5, a battery with an energy storage density 1/5 of that of gasoline would have the same range as a gasoline-powered car. We are not even close to this at present.

Powering a car with electricity is considerably more efficient than powering a car with gasoline in terms of primary-energy consumption. While the efficiency of energy use of an electric car is very high, most power plants producing electricity are only about 30 percent efficient in converting primary energy to electricity delivered to the user. Conversion of petroleum to gasoline is highly efficient. This results in electricity having a factor of 1.6 improvement in use of primary energy relative to gasoline, and is an important point in its favor.

A 2008 APS report on energy efficiency examined statistics on how many miles Americans drive per day. The conclusion of that study was that a full fleet of PHEVs with a 40-mile (60-km) electric range could reduce gasoline consumption by more than 60 percent. Thus America may not need a full fleet of BEVs to achieve a very considerable reduction in gasoline use.

The compelling question is whether electric cars can provide the convenience, cost, and range necessary to replace their gasoline-powered counterparts as the primary standard American family car. And this hinges almost entirely on the state of battery development, coupled with issues of making the grid green and providing widespread infrastructure for recharging electric vehicles.

The answer today is mixed:

Battery requirements are different for HEVs, PHEVs, and BEVs. A battery for an HEV does not need to store much energy, but needs to be able to store energy quickly from regenerative braking. Because it operates over a limited charge/discharge range, its lifetime can be very long. A PHEV battery must have much greater energy-storage capacity to achieve a reasonable electric range and will operate with a considerably greater charge/discharge range, which limits the cycle life of the battery. The battery for a BEV must supply all the energy to power the car over its full range–say 150-300 km–and must use most of its charge/discharge range. These requirements mean the battery for a BEV will be large, heavy, expensive, and have a limited cycle life. Replacing a battery for a BEV could entail a cost exceeding ten thousand dollars, which, divided by miles driven, will likely exceed by a large amount the cost of electricity to power the car.

The Berkeley 2012 symposium focused on two alternative chemistries:  lithium/oxygen (lithium/air) and lithium/sulfur. Both theoretically offer much higher energy density than is possible even at the theoretical limit of lithium-ion-battery development. However, the technical difficulties in making a practical battery with good recharging capability using either of these chemistries are considerable.

There are major research issues concerning all aspects of a battery: the cathode, the anode, and the electrolyte, as well as materials interfaces and potential manufacturing issues. A Li/air (Li/O2) battery requires cooled compressed air without water vapor or CO2, which would greatly complicate a Li/air battery system. A Li/air battery would be both larger and heavier than a Li-ion battery, making prospects for automobile use unlikely in the near term. However, a leading battery-development group at IBM wrote in a 2010 article on lithium-air batteries; “Automotive propulsion batteries are just beginning the transition from nickel metal hydride to Li-ion batteries, after nearly 35 years of research and development on the latter. The transition to Li-air batteries (if successful) should be viewed in terms of a similar development cycle.” Perhaps we need to be patient.

Many approaches are being followed to develop and improve battery performance, including studies using nanotubes, nanowires, nanospheres, and other nanomaterials. However, none of the researchers reported progress to the point where a practical battery using Li/air or Li/S could be envisioned.

Thomas Greszler, manager of the cell design group at General Motors Electrochemical Energy Research Lab, was pessimistic about the prospects for new battery chemistries: “We are not investing in lithium-air and lithium-sulfur battery technology because we do not think from an automotive standpoint that it provides a substantial benefit for the foreseeable future.”

A significant infrastructure challenge is the network that will need to be constructed for recharging the battery of a BEV. There are more than 120,000 gasoline filling stations in the United States. With the range of a present-day BEV being less than a third of that of a gasoline-powered car, a very large number of recharging stations will be required, in addition to home charging, which may be feasible only for those who live in private homes or apartment buildings with dedicated parking.

Charging an electric car takes hours, and even a fast charge will take longer than most people will be willing to wait. And charging should be done at night, when electricity generation and grid capacity are most available.

Battery research is being funded at a modest level, as there is a false perception among the public and policymakers that present battery performance is adequate for widespread acceptance of battery-electric vehicles. The national focus has been on renewable sources of energy. The United States will not become independent of foreign oil and combustion of fossil fuels until new battery technologies are developed. This will require a concerted national effort in science and technology at a considerable cost.

Fred Schlachter recently retired as a physicist at the Advanced Light Source, Lawrence Berkeley National Laboratory. He is co-author of the 2008 APS report Energy Future: Think Efficiency, for which he wrote the chapter on transportation.

Isn’t there some kind of “Moore’s Law” for batteries? Why is progress on improving battery capacity so slow compared to increases in computer-processing capacity? The essential answer is that electrons do not take up space in a processor, so their size does not limit processing capacity; limits are given by lithographic constraints. Ions in a battery, however, do take up space, and potentials are dictated by the thermodynamics of the relevant chemical reactions, so there only can be significant improvements in battery capacity by changing to a different chemistry.