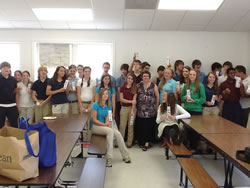 The winners of this year’s PhysicsQuest competition for middle school students have been announced by the APS Outreach Department. The grand prize winner is Michelle Harrison’s eighth grade class from the Holly Grove Christian School in Westover, Maryland.

“PhysicsQuest is a program where APS creates a kit with everything you need to do four physics experiments. They’re themed. This year’s theme was heat,” said Becky Thompson, APS’s Head of Public Outreach. The experiments  in the kits are tied together through a comic book based on APS’s original laser superhero, the middle-school-aged Spectra.

In her adventure this year Spectra had to save her friends from the clutches of a demon belonging to Tiffany Maxwell, the new mean girl in school. The four physics experiments in the kit included comparing the evaporation rates of water and alcohol using a drinking bird toy, examining the heat conductance of different metals by melting Hershey’s Kisses, demonstrating an exothermic reaction by letting steel wool rust, and watching warm air rise and turn a pinwheel.

Harrison’s class of 42 students correctly solved the four physics problems in the PhysicsQuest kit. The winners were chosen at random from the hundreds of correct submissions received. Her class received a $500 gift certificate to the teaching supply company Educational Innovations, who produced the APS-designed kits. In addition the students in her class each received an iPod Nano, a complete set of signed comic books, color changing pencils and a toy “drinking bird.”

“[The students] were over the moon that they got something that cool,” Harrison said. She added that she had been participating in PhysicsQuest for years and was a big fan of the kits. “It has given me easily done experiments, that are written well and that the kids can follow along with, and it gives me the resources to do them.”

The second place winners were from Lynne Towers’s class at Our Lady of Mount Carmel School in Bristol, Rhode Island. Her class received a $300 gift certificate to Educational Innovations, drinking birds, comics and pencils. Third place went to Kathy Peavey’s middle school class at Wilbur Middle School in Wichita, Kansas. The class received a $100 gift certificate, as well as the drinking birds, comics and pencils.

APS sends 13,000 kits out to more than 3,500 teachers. This year kits were sent to every state in the United States. The kits are open to any group who signs up for them, which included neighborhood science clubs, Boy Scout and Girl Scout troops and church youth groups.

The Physics Quest kits were first introduced in 2005 to coincide with the World Year of Physics, celebrating the 100th anniversary of Albert Einstein’s “miracle year.” The 2009 kit was the first to feature a comic, which told the story of Nicola Tesla and the electrification of the 1893 Chicago World’s Fair. Spectra made her debut in the 2010 kits about lasers and optics, to correspond with LaserFest, the 50th anniversary of the invention of the laser.

“Next year’s kit will focus on fluid dynamics. It will look at non-Newtonian fluids, turbulent flow and granular materials,” Thompson said. She added that the villain will be a nefarious swim coach named Henri Toueaux (pronounced “two-oh”).