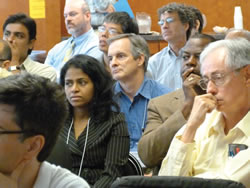 June 8 through 12 were a busy five days at the American Center for Physics as APS and the American Association of Physics Teachers (AAPT) jointly held back-to-back conferences–the Physics Department Chairs Conference and the Building a Thriving Undergraduate Physics Program Workshop–designed to bring physics department chairs and faculty up-to-date on trends in physics research and education, and address building thriving physics programs with sustainable, healthy physics enrollments.

The Chairs Conference began on June 8 with an optional Congressional Visitors Day, where attendees spent a day on Capitol Hill discussing issues with policy makers, and communicating the importance of science and education funding. Keynote speaker S. James Gates, a professor of physics at the University of Maryland and a member of the President’s Council of Advisors On Science and Technology led off the conference with a presentation on the Engage to Excel Report: Producing One Million Additional College Graduates with Degrees in STEM. The conference was built around four major topics including: physics curriculum in the 21st century, preparing students for careers in an increasingly global R&D environment, connecting with local and regional industry, and meeting the “die or thrive” challenge.

Stefan Zollner of New Mexico State University gave a plenary talk on preparing students for careers in an increasingly global R&D environment. He urged chairs to keep in touch with alumni, encourage students to attend APS March and April meetings, and inform students about industrial and government careers. Zollner also said that students should be encouraged to engage in more outreach and internship activities instead of taking additional courses in other fields. “The skills that make you successful as a department chair or as a researcher in business and industry were not taught in courses,” he said.

The conference also featured parallel small group sessions on topics such as undergraduate recruitment and retention, research funding, guidelines for undergraduate programs, and business/industry connections. In the session on undergraduate recruitment and retention, participants shared recent efforts that have improved recruitment, such as study abroad programs at CERN, “Freshman Experience” courses with alumni panels for first-year students possibly interested in physics, and encouraging freshman to retake calculus even if they come in with AP credit in order to improve math skills, a top reason for poor retention rates. The small group sessions presented participants with a casual atmosphere to share ideas and methods that work well or not at all at different universities.

As the Chairs Conference wound down to a close on Sunday, the workshop on Building a Thriving Undergraduate Physics Program, which focused entirely on the “die or thrive” challenge, was just beginning. Representatives from fifty-five institutions attended the sold-out workshop, which was sponsored by APS, AAPT, the Physics Teachers Education Coalition (PhysTEC), and the National Science Foundation (NSF). Thirty-one of the 106 workshop participants were department chairs who stayed on from the previous conference. Participants came from a good mix of Bachelor’s-, Master’s-, and PhD-granting institutions.

“We were very impressed by the participation rate and the high level of interest we had in the workshop,” said Peter Muhoro, APS Bridge Program Manager and one of the conference organizers. “Many physics departments are threatened with extinction and we are glad to have APS and AAPT facilitate discussions on building thriving physics programs.”

A series of inspiring case studies illustrated how physics departments were able to turn their programs into thriving ones. The physics department at University of Wisconsin–La Crosse was on the brink of extinction until sweeping curricular reforms, aggressive recruitment, new academic programs, and flexible advising, among other efforts, turned it into a nationally recognized program. James Madison University and Florida International University offered similar success stories that were useful to many departments hoping to do the same.

David Garrison, Associate Professor and Chair of Physics at the University of Houston-Clear Lake attended both conferences. “I found this a very valuable experience which occurred at just the right time for our program. We recently started an undergraduate physics program and are in the process of adding lower level courses to our university so the advice gained on how to better design introductory courses was very useful,” he said.

Key parts of the workshop were four planning sessions in which small teams of institutions met with consultants who offered their expertise and advice as institutions developed action plans to strengthen their own physics programs.

Naresh Sen of the University of Toledo cited these small group work sessions as the best part of the workshop. “The planning sessions were very valuable, since they sharply focused ideas with guidance from consultants and other people in the sessions,” he said. “Progressively focusing in on what to do to implement changes in our department–this is something concrete we can take home with us.”

The workshop had a notable turnout of minority serving institutions (MSIs). A total of twenty MSIs including Historically Black Colleges and Universities, Hispanic-Serving Institutions, and Predominantly Black Institutions attended. “The issues that most physics departments are facing are usually magnified at minority serving institutions,” said Theodore Hodapp, APS Director of Education and Diversity, and a conference co-organizer “We’re happy to see the high level of interest by physics departments, and hope faculty members will see APS and AAPT as significant resources as they work toward further improving their programs.”