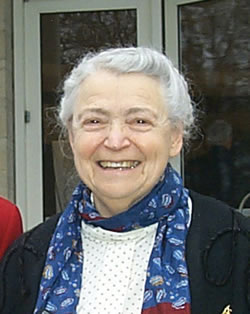 The Kavli Foundation named Mildred Dresselhaus, professor emeritus at MIT, as this year’s winner of the Kavli Prize in Nanoscience. The award cited her “for her pioneering contributions to the study of phonons, electron-phonon interactions, and thermal transport in nanostructures.”

The Kavli prize in Nanoscience is awarded to researchers who have made significant contributions to the science and application of the atomic, molecular, chemical and biological properties of structures at the nanometer scale. Over her fifty-year career, Dresselhaus has studied how and why nanoscale materials often display different properties than they do at macro scales. Her pioneering work on carbon fibers and the properties of layers of graphite laid the groundwork for later Nobel-Prize-winning research into buckyballs, carbon nanotubes and graphene.

Dresselhaus has been an active member of APS for many years. In 1984 she was elected APS President, and after the end of her term served as Chair of the APS Committee on the Status of Women in Physics. In 1999 she was awarded APS’s Dwight Nicholson Medal for Human Outreach for her mentorship of young scientists and promotion of international ties in science. In 2008 she received the APS’s Oliver Buckley Prize, one of the most prestigious awards in condensed matter physics.

Dresselhaus was a 1990 recipient of the National Medal of Science, and she was a co-recipient of the 2012 Enrico Fermi Award with Burton Richter. In 2000-2001, she served as Director of the DOE’s Office of Science.

The Kavli awards are presented every other year, in the fields of nanoscience, astrophysics and neuroscience. The Kavli Foundation was founded in 2000 by Norwegian-born physicist and philanthropist Fred Kavli to support scientific research. The Kavli prize is offered in conjunction with the Norwegian Academy of Science and Letters and the Norwegian Ministry of Education and Research. Recipients receive $1 million, a gold medal and a scroll recognizing their work. This year’s astrophysics prize was awarded to David Jewitt of UCLA, Jane Luu of MIT, and Michael Brown of Caltech for their work studying the solar system’s Kuiper Belt. The neuroscience prize was presented to Cornelia Isabella Bargmann of Rockefeller University, Winfried Denk of the Max Planck Institute for Medical Research, and Ann Graybiel of MIT for work on understanding how the brain processes perception and decision.