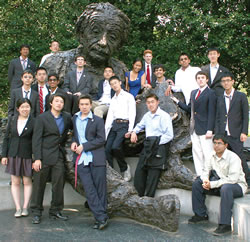 Photo by Matthew PayneOlympiad finalists gather at a well-known Washington landmark on the grounds of the National Academies.

The long hallways in the University of Maryland’s (UMD) physics department can feel eerily empty during June. Most of the undergraduates have left for the summer, but a new group of twenty promising high school students has filled the building’s lecture halls and laboratories. It’s time for physics boot camp.

These new recruits are training for the 2012 International Physics Olympiad–a weeklong competition among physics students representing over 85 countries. From July 15 to 24, national teams of five students each will converge on the country of Estonia on the Baltic Sea for the 43rd annual event.

Every year, the American Association of Physics Teachers (AAPT) selects 20 US team members from an initial pool of thousands of students. During the training camp at the University of Maryland, the 20 finalists will be further evaluated, and the traveling team of five students will be chosen from among them. Although only five students will attend the Olympiad, all 20 students are considered finalists.

“It’s a group of twenty incredibly unique individuals with widely varying backgrounds and an insatiable love of doing problems,” said Paul Stanley, the team’s head coach who teaches physics at Beloit College in Wisconsin. Stanley added that this year’s group was among the best he’s seen in his ten years of coaching the Olympiad.

On their first day of camp, the students were already tackling complex topics like special relativity and Lorentz transformations. After only one lecture, Stanley’s charisma and enthusiasm for physics had already rubbed off on some of the students.

In addition to attending lectures by the team’s coaches, the students will take exams and perform laboratory experiments during their time at UMD. This thorough training will prepare the students for the rigorous theoretical and laboratory tests they’ll face in Estonia.

During the days of testing in Estonia, the students will have little contact with their coaches. In fact, the students and coaches will be in two different cities for this core part of the competition. The five traveling members will have to exhibit not only a strong understanding of physics but also the necessary composure to perform under pressure.

After Estonian judges and team coaches tabulate the scores, they’ll award gold, silver and bronze medals to all of the individuals who perform above certain percentiles. Although the Chinese contingent has consistently outperformed other teams at the Olympiad, Stanley thinks this year’s US team will be tough to beat.

But physics training camp is about much more than preparing for a single competition. Many of the students have never been around so many other high-achieving physics students, and team members tend to forge lasting bonds.

“It gave me a connection with a lot of really talented and special peers,” said Jason LaRue, an assistant coach and alumnus of the 2007 Olympiad team.

In the past, students have also formed friendships with their international peers at the Olympiad. Although there are some friendly rivalries between countries, the Olympiad atmosphere is usually collaborative and harmonious rather than adversarial.

LaRue vividly remembers connecting with students from other countries during his participation in the  2007 Olympiad in Iran. Despite the ongoing tension between the US and Iran, the students representing the two countries overcame language and cultural differences while finding common ground through the universal language of mathematics.

During their downtime, some of the teams would inscribe clay tiles with their team names to commemorate their time in Iran. When LaRue asked an Iranian student about a specific Farsi character for his tile, the Iranian student quickly knew how to explain it: the character looked just like a ket, a symbol familiar from quantum mechanics’ bracket notation.

Stanley has consistently seen such examples in the past ten years as his students begin to appreciate the true value of the trip.

“They realize ‘I am with an international group of 400 people my age who think like I do, who have aspirations like I do, and we can get along, so let’s do so,’” he said.

The route to the Olympiad involves a thorough and lengthy application and evaluation process. In January of this year, thousands of students from across the country took the “F=ma” multiple choice exam. After grading this exam, AAPT invited between 400 and 600 students to take a more difficult free response test to determine the 20 finalists.

These students hope to continue the team’s tradition of excellence that began when AAPT formed the first US team in 1986. Since then, AAPT, the University of Maryland, and member societies of the American Institute of Physics, including APS, have supported the program.

As the traveling team prepared for their departure to Europe, Stanley gave them some words of encouragement.

And the coach’s final allusion to the team’s friendly rivalry was met with room-filling laughter: “And hopefully beat the Chinese team as best we can.”