To Infinity and Beyond with Physics 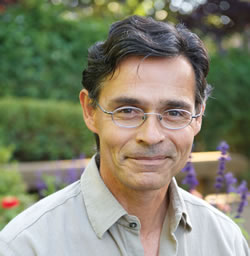 The Incredible Tony DeRose spends his days thinking about computer rendering and algorithms and his nights dreaming about cars, monsters and toys. The greatest aspect of his job, as Senior Scientist at Pixar Animation Studios, is that he gets to bring these dreams to reality and create true movie magic. “My goal is never to grow up,” he concedes. “I have one of the best jobs in the world. It is a fantastic opportunity to do work that is intellectually interesting and, with all the artists and storytellers, package it in a way that the whole planet enjoys.”

Pixar’s films, including Toy Story, A Bug’s Life, Monsters, Inc., The Incredibles, and Finding Nemo, rely on an army of applied mathematicians, computer scientists, engineers and physicists to take artistic ideas and convert them into visually stunning (and moving) imagery. “There’s a huge amount of science and technology behind every frame of every film we make,” notes DeRose, who leads a research team of six scientists, postdocs and interns. “The level of craft in the industry has increased amazingly. It used to be really difficult to watch anything. Sometimes now I’m completely fooled.”

DeRose came to Pixar after a decade in the Ivory Tower. He had been on the academic fast track, briskly acquiring a bachelors in physics from UC Davis and a doctorate in computer science from UC Berkeley, skipping the postdoc altogether, and accelerating directly into a tenured position at the University of Washington. But after 10 years of attending faculty meetings and grading papers, the trappings of scholarly existence had begun to take their toll and zap his creativity. “I had been promoted to professor and had figured out the academic career track thing,” he recalls. “And I realized I was never going to do anything else for 30 years.”

It was 1995. The iPhone didn’t exist yet and the Newton was a spectacular failure, and computer graphics were in their pre-pubescence. Pixar, “a small scrappy company, with no legacy code base,” as DeRose describes it, had already emerged as an innovator in a new kind of animation that required unique skill sets at the junction of physics, math and computer science. It was being led by President Ed Catmull, himself a computer scientist, who knew DeRose by reputation. He invited DeRose to join the firm, which DeRose happily did.

“The jump to Pixar allowed me to take some of the things I had been working on in the lab at the University of Washington and try them out in industry,” he says. His research was in subdivision surfaces and wavelets, which he realized would not be as appreciated in big firms like Boeing and Ford, where it is difficult to effect change. “I thought I had an interesting and powerful technology in my pocket,” he adds, and Pixar, still a small and flexible company, would give him the opportunity to apply his technology to real-world problems.

“Subdivision surfaces allow shapes to be described using polyhedra, that are faceted models, that are repeatedly refined by simple algorithms that can be shown to converge to smooth, differentiable surfaces in the limit,” he explains. One of the first projects on which he worked after being hired focused on making skin, cloth, and other movable shapes more believable on screen. This technology contributed greatly to this effort, as seen in "Geri’s Game," which won the Academy Award for Best Animated Short Film in 1998. “Toys are compelling as lifelike characters, but creating human characters is much more difficult,” he says. “People are squishy things that move in much more complicated ways.” Using subdivision surfaces “gave me a way of modeling, a simple and artist-friendly way of creating complicated shapes that move.” For example, animating skin so it looks realistic is very tricky. “Mathematical techniques made that problem tractable,” he says.

DeRose’s problem-solving tool box consists of other techniques in applied physics and math such as approximation theory and differential geometry. But it is the capability to utilize subdivision surfaces which has caused Pixar and the entire industry to expand to infinity and beyond. “The adoption of subdivision surfaces is becoming an industry standard,” he notes.

It’s a good thing he has all of these skills, because the four-year-long process of bringing a story concept to the theater is “so inherently messy,” he admits. Two years are spent on story development and another two years are expended on converting the story to the screen. But then things can really shake up. “Once you create the imagery, you start to notice the need to redesign–the character of the story may not be working,” he says. For example, Toy Story 2 was largely rewritten in the last year of production because of the need to alter the script to coalesce with the capacities of the technology.

DeRose relishes these scientific challenges. “This is the perfect way to bring the concepts I love in physics to life,” he says.

His time is structured around four different areas: his own research, which involves writing code and advising graduate students; leading the research group; co-owning Pixar’s patent portfolio; and educational outreach at the middle and high school levels. In fact, he spends 20%-25% of his time as an “Evangelist” for the Young Makers Program for children. A collaboration between Pixar, Make Magazine, and the Exploratorium in San Francisco, the program cultivates and celebrates students’ creativity and inventiveness, and pairs them with mentors to assist them in designing a project for the Bay Area Maker Faire.

Part of the reason DeRose (and Pixar) are dedicated to mentoring emerging stars of computer animation is because they want to be able to shape the new talent and inspire them to pursue careers in the industry. As for job prospects now and in the future, DeRose is confident that the need for highly-trained scientists, who can also act as generalist problem-solvers, will continue to grow. “Most others I know of on the entertainment side of computer graphics were trained in computer science or applied math, even though what they do is computational physics,” he says. And yet, “physics teaches you to be fearless…You become used to having to chew on problems for a while.”