June 1911: Invention of the Geiger Counter 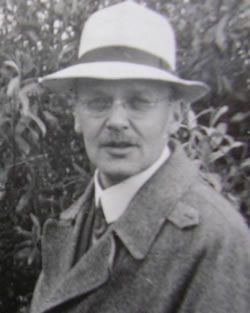 It is impossible to discuss the history of the atom without reference to the famous gold foil experiment spearheaded by Ernest B. Rutherford in 1909, which demonstrated experimentally for the first time the existence of the atomic nucleus. The results disproved J.J. Thomson’s earlier plum pudding model of the atom, and paved the way for Niels Bohr to develop his own atomic model, which continues to play an important pedagogical role today. A key element of that experiment was the invention of a reliable device capable of measuring alpha radiation, by Rutherford’s lab assistant, Hans Geiger.

Working with Rutherford, Geiger demonstrated that in the radioactive decay of uranium, alpha particles of two different energies are emitted, caused by two uranium isotopes. This led to his work with J.M. Nuttall to formulate the Geiger-Nuttall Rule in 1912, describing the linear relationship between the radioactive time constant and the logarithm of the range of alpha particles.

To probe the structure of the atom, Rutherford wanted to devise an experiment to measure the electric charge of a stream of alpha particles hitting a target and scattering, hoping to demonstrate that alpha particles carry a double positive charge. Working with one of Rutherford’s undergraduates, Ernest Marsden, Geiger came up with an ingenious device that fired alpha particles through gold foil onto a screen, where they could be detected as scintillations.

But how would they count the number of small flashes of light per minute with any suitable degree of accuracy? Initially, they used a microscope that could be rotated around the gold foil, and took turns counting the flashes. It was hard on the eyes, however: one had to sit in a dark laboratory and wait 30 minutes for one’s eyes to adjust, and an observer could usually manage only about one minute of accurate counting before needing to be relieved.

Still, they persevered, and the results of the gold foil experiment are now legendary. Instead of merely passing through the foil with only minor deflections–as one would expect if the Thomson plum pudding model were correct–some alpha particles appeared to bounce back at the source, “as if you fired a 15-inch shell at a piece of tissue paper and it came back and hit you,” Rutherford recalled. Clearly, a new model of the atom was needed.

Geiger still thought there had to be a better way to measure the scintillations, and in 1911 he invented a device to count radioactive alpha particles automatically in normal light. It used a Crooke’s tube as one electrode, with a thin wire running through the middle of the tube as a second electrode. When a voltage was applied, any alpha radiation passing through ionized the gas, giving rise to an avalanche of electrons. An electrometer would then register each passing particle.

In 1914, Geiger returned to Germany, initially to take charge of radiation research at the country’s National Institute for Science and Technology. But the outbreak of World War I put a damper on science: he served as an artillery officer with the German army instead. The harsh conditions in the trenches on the front lines took their toll: Geiger developed painful rheumatism, which plagued him for the rest of his life. After peace returned, Geiger returned to research, finding positions at the University of Kiel and the University of Tübingen before landing the position of physics chair at the Technische Hochshule in Berlin in 1936.

It was during his stint at Kiel that Geiger collaborated with one of his doctoral students, Walther Muller, on improving his original Geiger counter device, making it more efficient, responsive, durable and portable. Unlike the earlier version, which could detect only alpha particles, the new improved Geiger-Muller counter could detect many different kinds of ionizing radiation. He used his new toy to confirm the existence of light quanta in 1925, and later to discover cosmic ray showers, which would claim his scientific attention for the remainder of is career.

Then came the rise of Adolf Hitler and the draconian policies of the National Socialist Party, and the eventual outbreak of World War II, which combined served to decimate an entire generation of German physicists. Geiger decried the politicization of the universities and signed a petition with 74 other colleagues urging the new government not to interfere with their work–to little avail. But reports differ as to whether he helped or rejected his beleaguered Jewish colleagues, many of whom were forced to flee the country.

He was also a member of the so-called Uranium Club, a clandestine German effort to develop and produce atomic weapons after the discovery of atomic fission in 1939. The program splintered in 1942, with its scientists moving to other areas of research deemed more urgent, after it was determined (incorrectly) that nuclear fission would not play a major role in ending the war.

Geiger’s chronic rheumatism continued to worsen in his final years. He lived just long enough to see the fall of the Nazi regime. Just as Geiger’s health seemed to be improving, his home city of Babelsburg was occupied by Allied forces, and he was forced to flee to Potsdam. Already frail, he died there on September 24, 1945, at 62.