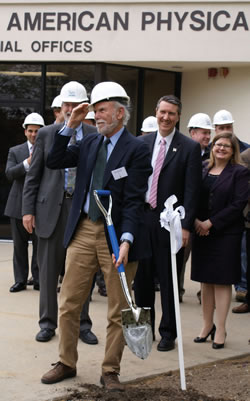 APS past President Barry Barish tips his hat to acknowledge the plaudits of the multitude as he formally breaks ground for the building expansion. Standing behind him, left to right, are APS Editor in Chief Gene Sprouse (partially obscured), Brookhaven Town Supervisor Mark Lesko, and Acting Suffolk County Energy Director Lisa Broughton.

At a ceremony on May 8, attended by APS staff, local dignitaries, and construction contractors, APS formally kicked off the construction phase of the long awaited expansion to its editorial office on Long Island. The new construction will be the first addition to the building since 1997.

The office is responsible for the publishing of all APS journals, Physical Review A through E, Physical Review Letters, Physical Review X, Reviews of Modern Physics, and the online-only special topics journals for Accelerators and Beams and for Physics Education Research. The building will have a second story added with space for offices, a lunch room and roof deck. The first floor will also be reconfigured to add more office space.

“Since the building was last expanded, the number of manuscripts [per] year has doubled. In order to handle the papers, the number of editors continues to grow, and we need more space for them and for other staff,” said APS Editor in Chief Gene Sprouse. “It feels great to be over the delays that we could not control and finally get moving on the construction.”

The construction had been delayed for about a year after a procedural issue was raised by a local environmental group, the Pine Barrens Society. The issue was resolved in court last September, and the rest of the required permitting followed in due course.

Sprouse and APS past President Barry Barish both gave brief speeches before ceremonially overturning the first shovelfuls of dirt in front of the offices. Town supervisor Mark Lesko and Lisa Broughton, the Acting Energy Director and Bio/High Tech Specialist at Suffolk County also spoke at the ceremony. Sam Aronson, Director of Brookhaven National Laboratory, attended as well. The APS office is located in Ridge, New York, just across the William Floyd Parkway from the Department of Energy’s Brookhaven National Lab.

Barish oversaw the planning for the new construction on behalf of the APS Presidential Line. “The APS journals operation continues to grow, attracting more of the best work of physics researchers worldwide. More submissions require more editors to conduct peer review, and that meant that the building had to be expanded,” he said.

Construction is expected to last sixteen months, and be completed in the fall of 2013.