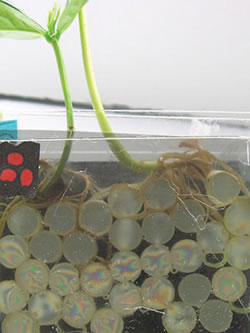 Cramped inside booming urban centers, and forced into farmland that is depleted, compacted or sandy: life, for plants, is getting harder. With the human population taking up more space, while also demanding more food, both humans and plants have something at stake in the understanding of how plants flourish or die in these new soils, many of which are granular materials.

“Cultivated sandy soils have not been studied much,” said Christian Hartmann, a researcher in soil science at the French Institute of Research for Development (IRD). “[In the past] it was not worth it to invest [in]… research in poor soils as long as rich, clay-filled soils were available. But now we have reached the limit of soil resources and we need to study marginal soils including … sandy soils. But the physics of these granular materials is still not well understood by physicists, and even less understood by soil scientists.”

Models of clay-rich, healthy soil systems often treat the soil as a single object with a high plasticity. While roots cut their way through natural channels, the soil compacts at microscales and leaves larger channels for plants that follow. Sandy soils and other granular materials have vastly different physical properties.

Granular materials often don’t compact. Instead they reorganize, causing changes to the system on a larger scale. For small roots, these changes are on the scale of millimeters; but larger tree roots can displace concrete sidewalks and paved roads. So-called “pioneer” plants might be able to navigate through sandy soils and pave the way for a wider variety of plants, but first scientists will need to know how these soils impact the growth and life of different plants. Hartmann, who studies how compact soils can be rehabilitated, says he thinks moving the field forward will require more collaboration between plant and soil scientists and granular materials scientists.

At the APS March Meeting, Hartmann’s colleague Evelyne Kolb, a physicist at PMMH-ESPCI in Paris, presented measurements of the radial forces of plant roots as they grow in granular environments. Most studies of root forces, says Kolb, measure the axial force (straight along the length of the root) by placing some type of scale directly beneath it. Measuring the force exerted by plant roots moving between grains poses more of a challenge. Kolb and her colleagues are preparing a paper for publication that, she says, mostly demonstrates the effectiveness of the technique for continuously measuring the forces developed by growing roots, in situ.

The technique utilizes a method called photoelasticity, which is familiar to many granular materials physicists. Photoelastic disks, 9 millimeters in diameter, act as 2-dimensional grains that a plant root might encounter in sandy soil. If one tries squeezing one of the disks while viewing it through crossed polarizers, the disk is suddenly covered in fringes of light, which move and change as a result of the force they experience. Similarly, young chickpea roots sprout and find their way to a narrow gap between two photoelastic disks, and as the roots try to pass through the opening, they exert a force, and create a visual fringe pattern. Analysis of those fringes using a computer program yields a determination of the force. Eventually, the studies will shed light on how mechanical forces in granular soils impact the growth of roots, as well as how the roots couple with the soil and deform it.

Soil and plant science has much to gain from physics, but the reverse is true as well. At the March Meeting Dawn Wendell, a mechanical engineering postdoc now working at the CNRS/Saint-Gobain Aubervilliers in France, discussed her graduate research at MIT on how to make mechanical diggers, inspired by plant roots, that can penetrate granular soils.

Using a photoelastic disk system, complementary to Kolb’s, Wendell studied how well young plant roots moved through granular spaces. When the plant roots couldn’t force their way in between the disks, they would deviate to a different path. A stiff, inflexible root won’t make it very far. The same seems to be true of mechanical diggers: flexible diggers succeed at making their way through sandy soil, and potentially through other granular environments like layers of rubble. In her graduate research Wendell also found that flexible diggers also save up to twice as much energy finding their way. That will be important for robots attempting to use these types of diggers in extreme environments, like disaster areas covered in rubble, areas prone to avalanche, or sandy frontiers like the bottom of the ocean. But diggers with too much flexibility will buckle in tight situations. The challenge now, said Wendell at a press conference, is finding the right degree of flexibility for a particular environment.

Wendell is a mechanical engineer, Hartmann is a soil scientist and Kolb is a physicist. No single field has all the answers to these questions. Instead it is the combined expertise that leads to the greatest progress; and, as Wendell says, flexibility is key.