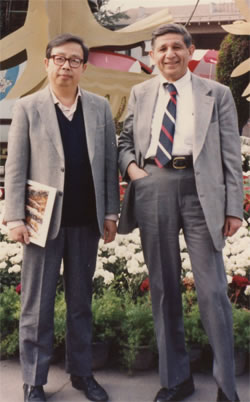 Fang Lizhi (left) in Beijing in 1988, with Edward Gerjuoy of the University of Pittsburgh.

On April 6, 2012, Fang Lizhi, a prominent astrophysicist and Chinese dissident, passed away in Tucson, AZ. He was 76.

Fang had been a professor of physics and astronomy at the University of Arizona (UA) for 20 years. He was well known for his work in cosmology, but perhaps even more recognized for his advocacy of government changes in China. His outspoken activism contributed to the student revolt and protests in Tiananmen Square that resulted in a massacre which left the whole world riveted.

After Tiananmen on June 4, 1989, he and his family found sanctuary at the US Embassy in Beijing. By 1990, he was able to leave the country, stopping for a short time at the University of Cambridge and Princeton University, before settling at the UA.

Fang was my first research advisor and mentor, and influenced my career like no other person. In fact, it was Fang’s decision to leave Princeton to head west, which ultimately solidified my choice to attend the UA for undergraduate studies.

In 1992, I was living in West Windsor, NJ, a stone’s throw from Princeton, getting ready to graduate from high school. I was certain I wanted to be an astrophysicist but was unsure about where I wanted to go to school. I had narrowed it down to three selections, including the UA. But one day that winter, my mother brought home the local paper. When we casually glanced through it we noticed a tiny speck of an article announcing that Fang Lizhi, a world-famous astrophysicist, was leaving Princeton to become a professor at the UA. Living in Tiger Country, we couldn’t get over the fact that someone so distinguished would trade in the Ivy for cactus. But that sealed the deal. The next day, I signed the papers to confirm I would attend the UA.

When I got to campus that fall, I felt somewhat intimidated by the idea of knocking on this internationally known scientist’s door. But a few days later, I visited the UA Honors Program’s offices and was flipping through a book of faculty who had volunteered to be mentors to honors students. Fang’s name leaped off the page. Now I had an excuse to email him–I could ask him to be my mentor. When I contacted him, he was so friendly and personable and insisted I come by his office as soon as possible. And when I told him that I pined to be an astrophysicist, and had come to the UA because he was there, and really wanted to work with him, he smiled and graciously offered me a chance of a lifetime: he invited me to work with him AND he happily arranged for me to get a NASA Space Grant to pay for my research. I wasn’t old enough to vote, but suddenly I was collaborating with an international superstar, analyzing Lyman-alpha cloud and quasar data, in a quest to unlock the mysteries of the universe’s birth.

I continued working with Fang throughout my first year and into my second, even after I switched my major from physics to mathematics. He supported me, and after I graduated, and began my career as director of communications in the UA Physics Department, he served as a source of inspiration. Even though I didn’t become an astrophysicist, Fang’s mentorship made a world of difference to me. He taught me to be fearless in my career, to always ask questions, and to look beyond the obvious for answers. Fang was an architect of a revolt that changed the course of China, but to me he was the architect of a revolt that changed my career in innumerable positive ways. I miss him already.